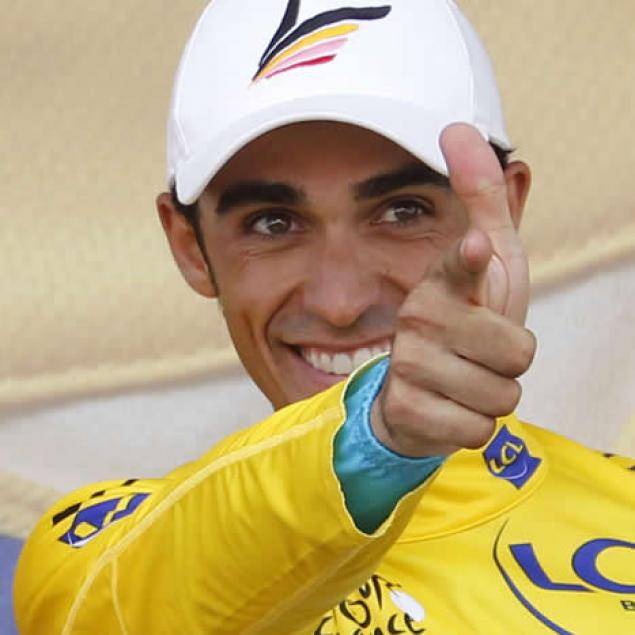 Alberto Contador won stage 16 of this year’s Vuelta a Espana today, after dropping his chief rival, Chris Froome (Sky), during the last kilometer – to seize the stage victory.

Contador and Froome attacked the lead group during the final 5 kilometers of today’s stage, leaving both riders to battle it out – until the Spanish rider jettison his breakaway companion during the final kilometer.

During the last part of today’ stage, a fight broke-out between Gianluca Brambilla (Omega Pharma-QuickStep) and Ivan Rovny (Tinkoff-Saxo), which led to both riders being expelled form the race.

It was unclear what originated the confrontation, but a fight definitely ensued within the view of race officials.

Today’s "Queen" stage featured no fewer than five categorized climbs, four of which were category 1.

The group subsequently built up more than half a minute lead over the peloton, as the race approached the first climb of the day – the Alto de la Colladona.

From there, the breakaway group splintered, leaving only Kennaugh, Rovny, Sanchez, Malori and Clement out front with a slight gap.

However, back in the peloton, Tinkoff-Saxo began setting a blistering pace, with numerous riders falling off the pace.

Over the course of the next category climbs, the lead group continued to shuffle back and forth, with riders being dropped almost as quickly as they joined in at the front.

But, as the race crested the climb of the Puerto de San Lorenzo climb, only De Marchi and Brambilla remained out front – with Contador’s group 3:02 behind.

On the descent, Poels managed to bridge himself to the two leaders. And, with 20 kilometers remaining, their advantage was hovering around 3 minutes.

It was during the ascent of the Lagos de Somiedo, that the fight between Brambilla and Rovny broke-out, which subsequently led to both riders being ejected from the race. This left Poels and de Marchi alone at the front. De Marchi then attacked his lone companion, and carried on alone with 11.6 kilometers remaining.

With 4.5km left, Froome initiated an attack from within the ranks of the chase group, with only Contador able to follow.

Shortly thereafter, De Marchi was caught during the final 3 kilometers. And, despite a valiant attempt to stay onboard with Froome and Contador, the Italian rider was dropped.

From there, Aru, Valverde and Rodríguez took up the chase.

Meanwhile, up front, Froome continued driving the pace – with his Spanish rival right on his heels.

However, Contador then attack with a fierce acceleration, leaving the British rider struggling in his wake, as he rode away to a solo victory.

Froome crossed the line 14 seconds later, followed by a distant De Marchi who finished a further 48 seconds behind.

“When Froome has a change of pace it is difficult to follow him but I managed to do it and I knew Valverde and Purito were behind so it could be an important day for me,” said Contador. “What gives me more reassurance is that I am recovering well, I have the power in my legs despite the I suffered and now we have a rest day ahead of us that we need to make the most of.”.