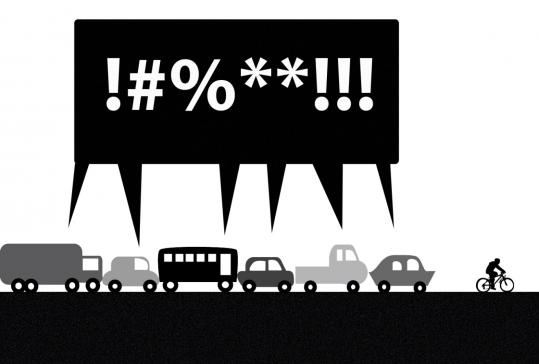 It’s summertime, and the livin’ is easy.

Well, let’s hope. But the livin’ is also hot, and when the temperatures rise, so do tempers. And when tempers rise on our already volatile roads, it’s only a matter of time before another cyclist is confronted by a road rager bent on venting his or her anger with some vigilante. When that happens, things can go south real fast.

So what is driving that aggression and harassment, and what makes some drivers progress from there to road rage?

For one thing, the road environment is stressful. It’s often congested, with more cars crowded onto our roads than the roads can reasonably handle. Although the automobile industry promises the freedom of the open road, that freedom is just an illusion. Instead of the open road, people often sit trapped in their cars, surrounded by other people trapped in their cars, making agonizing progress to wherever it is they are headed. And as their stress levels mount, they start to take it out on each other, complaining out loud to themselves about the other drivers, cutting each other off in traffic, stress and anger and aggression rising in a toxic mix inside them.

When a driver gets aggressive with another driver, it may be an infuriating social transgression, but it doesn’t typically endanger the other driver’s life. In contrast, when a driver gets aggressive with a cyclist, it can and often does have serious, life-altering or even life-ending results. And too often, when the aggressive driver’s target is a cyclist, our society’s response to that behavior is insultingly inadequate for the wrong committed.

But we’re not just talking about equal-opportunity aggression. There’s a strong undercurrent of anti-cyclist feeling in our society, and some drivers will go out of their way to get their hate on with a cyclist. That can mean everything from honking the horn, yelling, blowing smoke, and throwing things, to tailgating, buzzing, swerving, or running the cyclist off the road, to deliberately hitting the cyclist. Although most of these acts are not the type of epic meltdown that we think of as road rage, each of these acts of harassment can quickly escalate to a more serious offense.

So what do you need to know to keep yourself safe on the road this summer?

The first rule of road rage is, don’t engage with the assailant. That can be hard advice to follow when somebody is launching an unprovoked assault on your dignity and simultaneously endangering your safety. People have a right to their dignity and to their safety, and nobody has a right to take that from them. But if you do respond to the attacker, you are not likely to get an apology or a rational, well-reasoned discussion with your tormentor. More likely, you will get an escalation of the road rage.

In fact, venting your frustration doesn’t just just run the risk of escalating the level of rage from your assailant—it can increase your own anger as well, and lead you to lose control of your own emotions. This is what road-rage expert Dr. Leon James calls an “emotional hijacking,” when our rational mind is overwhelmed by the emotional center of our brain.

I’ve thought about it myself. I want to stay in control of my emotions. I don’t want to give that driver power over me. So when I cross paths with a bad driver, I keep my cool. If I feel like I want him to get schooled, I remind myself that sooner or later, somebody will teach him a lesson. It just doesn’t have to be me.

If the bad driving was intentional, it’s harder to stay in control, but I also don’t want to give the motorist control over me. By staying in control of my emotions, I win, he loses. This is the kind of rethinking that Dr. James recommends as a way to avoid getting trapped in the spiral of escalating road rage.

So what do you want to happen if you are targeted by an aggressive driver? Think about it now, and you have a chance of getting the outcome you want.

But what if, despite your best intentions, the situation still deteriorates? In Part 2 of this article, I’m going to talk about what happens when road rage does escalate into violence.

Bob Mionske is a nationally-known cycling lawyer and advocate for the rights of cyclists. A former U.S. Olympic and pro cyclist, Bob amassed a record of over 100 wins during his racing career. Bob represented the United States in the 1988 games in Seoul, South Korea, where he made the winning break in the men’s Individual Road Race, finishing in fourth place.  In 1990, Bob was the U.S. National Champion in the Men’s road race.  Bob again made the United States Olympic team for the 1992 games in Barcelona, Spain, assisting teammate Lance Armstrong to a fourteenth-place finish. Bob turned pro after the 1992 games, racing for Team Saturn for one season, and then retired to become director of the team for 1993.

At the end of that season, Bob left pro cycling behind and headed off to law school. After passing the bar exam, Bob set up the first bicycle law practice in the nation, representing professional racers David Zabriskie, Michael Barry, Tom Danielson, and Kevin Livingston, while also defending the legal rights of weekend warriors, commuters, and messengers. Bob also began writing his internationally accaimed bicycle law column, Legally Speaking, featured on VeloNews.com. Bob’s perspective on bicycle law and the rights of cyclists has also been featured in national magazines, including Esquire, Bicycling, and Outside.

In 2001, Bob wrote the legal analysis section in Bicycle Accident Reconstruction for the Forensic Engineer, and in 2007, Bob authored Bicycling & the Law, the first book on bicycle law written for cyclists since The Road Rights and Liabilities of Wheelmen was published in 1895. Since publication of Bicycling & the Law, Bob has made numerous media and speaking appearances advocating on behalf of the rights of cyclists. In February 2009, Bob continued his advocacy on behalf of the rights of cyclists with Road Rights, a new column on bicycle law for Bicycling magazine.