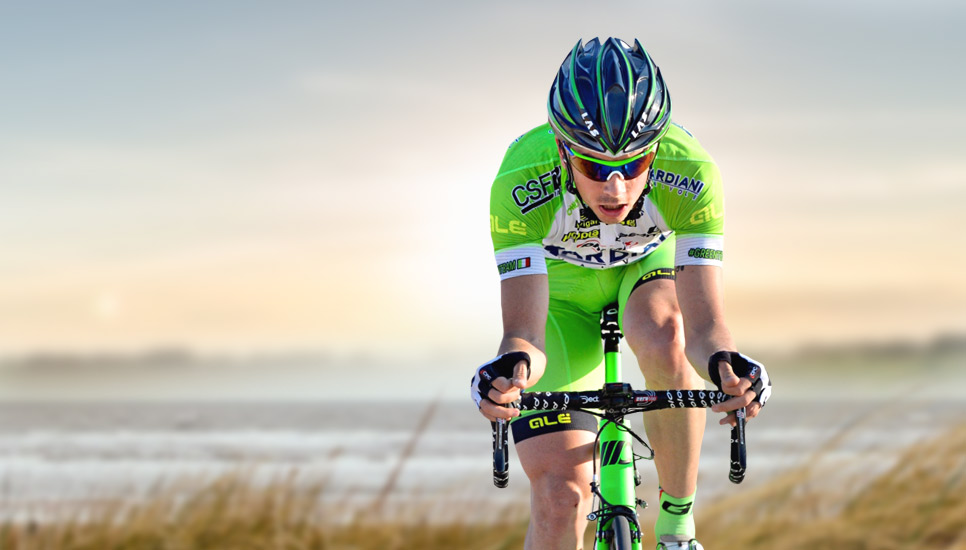 ALÉ is an Italian cycling apparel brand which is helmed by well-known former pro cyclist, Piertro Caucchioli, that’s only been around for a short-while.

However, the brand has been steadily gaining ground here in the USA, and we were so impressed with the style and design of ALÉ’s apparel range when we first saw it, that when the time came for us to do our own kit, we knew who we wanted to partner with.

It should be noted however, before making a final decision to go with ALÉ’s glorious PRR custom kit, we heavily scrutinized an array of other premium cycling brands – both beginning and ending with vowels as well.

The fit and finish and attention to detail was everything that we excepted the PRR to be, especially the saturation and depth of color for which the APG factory in Italy has come to be known for.

Indeed, the crispness of the PRR’s inking and the boldness of color, along with a host of subtle details, left it unrivaled by any other samples that we looked at.

The construction of the PRR jersey utilizes a 30 gr/mq micro-perforated fabric, along with a unique carbon triangle weave that subtly permeates the background of the jersey’s color fields. In addition, the jersey features ALÉ’s J-Stability System on both the bottom sleeves and the silicone gripper waistline, which ALÉ’s says allows the PRR “to follow the position of the rider in perfect outline with the bike”. In addition, there are three rear pockets, plus an extra side zip enclosure, so riders can carry essentials and more closely secure things such as money and identification.

The PRR bibshorts feature a blend of 3 different fabrics incorporated into a multi-panel construction, along with 5cm LEG GRIP system, as well as a slight touch of compression, which ALÉ says evenly distributes pressure which is able to keep the bibshorts in place without the need of silicone.

The shoulder straps feature a similar design, wherein the same grip system is used to anchor the PRR into perfect position.

Additionally, the PRR bibshorts feature one of the most generous pads we’ve ever come across, that not only possess the right amount of density, but proper uniformity as well. These two elements are critical to prevent the pad from losing its shape and cushioning during long rides. And anyone who’s experienced a pad that loses its composure during a long stint in the saddle, knows how it can bring about pain and discomfort that no amount of chamois cream can remedy.

So how does the ALÉ PRR kit perform?

Well, for starters, like all European race-cut apparel, the PRR runs extremely small, so it’s important to get the correct sizing down. We found that most riders had to go up two sizes from what they would normally wear. For example, in my case, depending upon the brand, I can range between a medium or large jersey and correspondingly so with bibs.

However, with the PRR I had to bump up to a size XXL. Yes, that’s right a XXL.

Sizing aside, after putting the PRR through its paces out on the open road, it proved to be one of the best performing kits that I had ever experienced. And this conclusion was not simply based on just a jaunt or two, but rather after many long rides.

In short, the technical aspects of the PRR’s materials proved superb in terms of moisture control, breathability and comfort – and equally so of the pad – placing it amongst the top percentile of high end European cycling apparel that I’ve ever encountered.

Equally important, the PRR’s construction showed no signs degradation even under the harshest of riding conditions, not to mention numerous launderings.

Indeed, after weeks of riding followed by repeated washings, there wasn’t so much as a stitch out of place, or the slightest bit of color fade. Remarkably, the PRR continued to present itself on each and every ride, as though it had just been freed from its packaging, as compared to other brands that can exhibit early onset of pantone fade and material breakdown – especially black colored apparel.

ALÉ’s custom PRR range requires only a modest commitment of 20 kits, with an extremely fast turn around time of approximately 40 days.

Furthermore, ALÉ has it’s own graphic design services here in the USA, that makes designing one’s kit a simple and straightforward process, which is something we found extremely refreshening –  having dealt with overseas brands in the past.

Just take a look at the quality and construction and boldness of color associated with our custom Capo Velo kits!