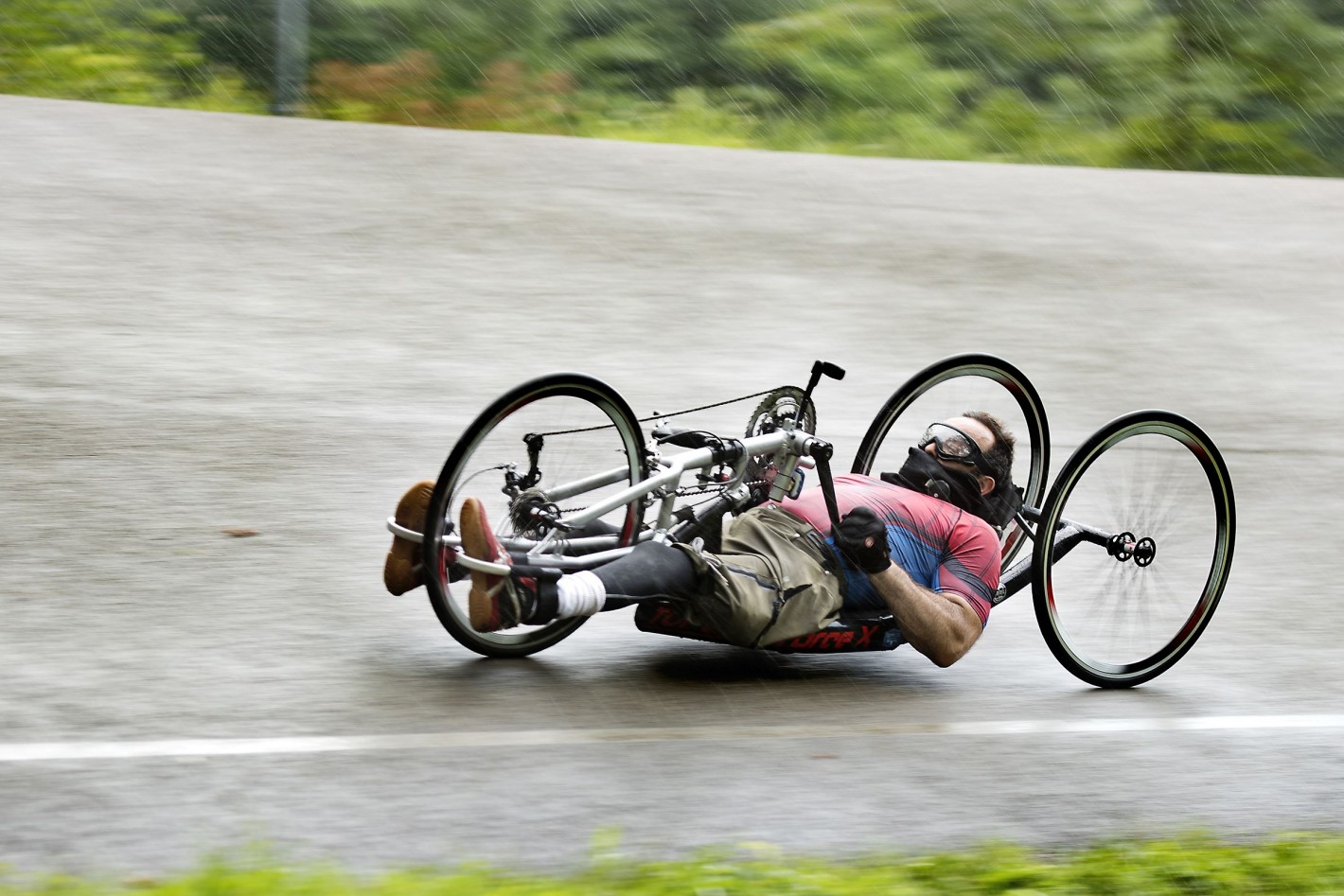 A Pittsburgh man is eyeing the world record for hand cycling over 24 hours. Attila Domos, 48, unofficially broke the record over the weekend in a training attempt, hand cycling 407.7 miles (656.13km) over 24 hours, beating the previous record of 403.8 miles (649.85km) set by German Thomas Lange.

Because there were no officials from Guinness on hand, the record will remain unofficial. However, Domos said he plans an official attempt on the same track in Florida where Lange set the record, with the course even friendlier for the attempt.

“I’ll have to go down there to make it official,” he said. “But the nice thing about that is I won’t have to climb a hill every half-mile.”

Domos, who is paralyzed from the waist down, crashed once during the attempt after becoming delirious early in the morning. He also battled a rain storm that left one of the turns partially flooded.

“I’ll tell you what, I’m going to be in a lot of pain for the next couple of days,” he said shortly after finishing. “It’s worth it right now.”

In addition, Domos is one of only two people who have used a hand-cranked cycle to participate in the Dirty Dozen race, in which bicyclists attempt to ride up the 13 steepest streets in Pittsburgh, according to race creator Danny Chew.

“Only the second one to try it,” said Mr. Chew, adding that Domos has made it up eight of the 13. “But obviously he would like to eventually be able to do all the hills.”

The longest Domos said he has ridden at one time was 10 or 11 hours, although that wasn’t exactly nonstop — he had to pull over to fill up on water and to relieve himself. For his test run, however, he’ll have a support team keeping him hydrated and nourished and a catheter installed to allow him to keep moving.

In recent weeks, Domos began training with a new handcycle made of aluminum with carbon fiber rims that’s 10 pounds lighter than the one he had been using. It also lies flatter so there’s less wind-resistance. He has dubbed the new cycle – “Beast.”

“I certainly gave the new bike the proper name,” he said in a text message earlier this month after a day of training. “It really IS a beast.”

More confident than ever that he could break the record in Pittsburgh — even if it’s unofficial — he will have some extra motivation on Saturday because he’s raising money for charity.

He’ll be riding for the San Diego-based Challenge Athletes Foundation, which got him his first handcycle, and Pittsburgh SteelWheelers, which has previously paid his way into the Pittsburgh Marathon.

Motivation won’t be in question for Domos on Saturday. The only question is whether he’ll actually be able to break the record, whether it’s unofficially in Pittsburgh or for real in Florida.

“I don’t know anyone with a better attitude than Attila,” said Alan Orlansky, a member of Mr. Domos’ support team. “Based on his feeling, he feels he can do it, and I believe him.”