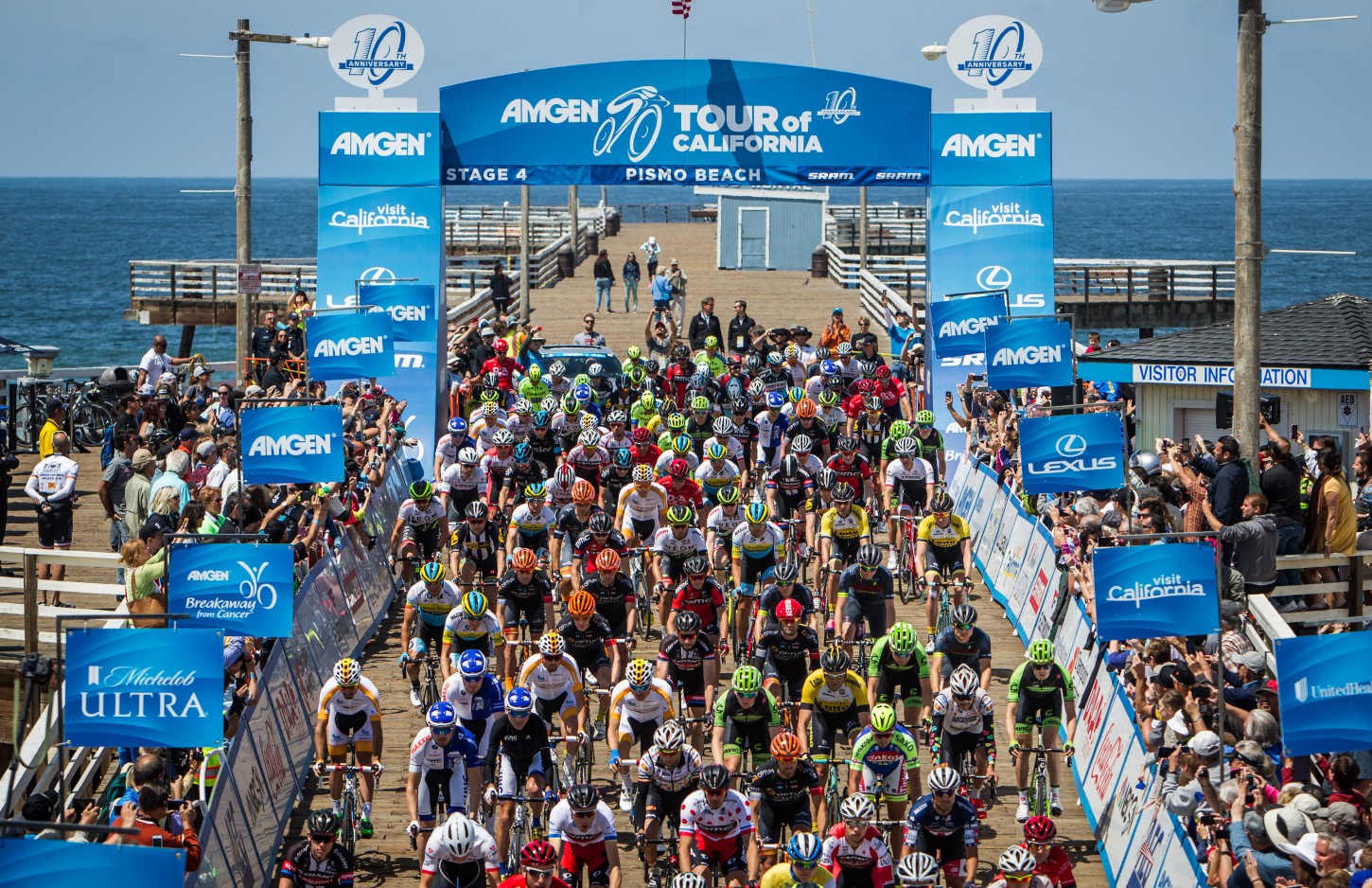 Organizers for the Amgen Tour of California announced the host cities for its 2017 men’s and women’s races today, which will encompass no fewer than 12 host cities, with Sacramento getting the overall start on May 14 and Pasadena bringing up the finish on May 20.

The four-day women’s WorldTour race from May 11-14 will start three days before the men in South Lake Tahoe. After two stages in the Tahoe area, the women will head to Elk Grove for the start of stage 3, which finishes in Sacramento. The race will conclude with a circuit race in Sacramento on the opening day of the men’s race.

On that same day, the seven-day men’s race will get underway with a start and finish in Sacramento that should feature finishing circuits on the same route as the women.

After a sprinter-friendly start, stage 2 will favor climbers with an uphill finish. Otherwise, the GC riders will have two other key stages to shine: the stage 5 summit finish on Mount Baldy, and the stage 6 individual time trial in Big Bear. Notably, this 15-mile time trial takes place at high altitude, which might make the outcome a bit less predictable.

Perhaps, the biggest attraction of this year’s race, is the return of World Champion Peter Sagan, who won the overall in 2015 and holds the record of 15 stage wins. The the two-time and reigning World Champion will move to Bora-Hansgrohe in 2017 but has already said he’ll return to California next year.

more from the Amgen Tour of California…

The 2017 Amgen Tour of California men’s competition is set to begin in Sacramento on May 14, 2017, while the 2017 Amgen Breakaway From Heart Disease Women’s Race Empowered with SRAM will begin three days earlier on May 11 in South Lake Tahoe, it was announced today by AEG, owners of the annual event. The women’s competition will conclude its four-stage race in Sacramento on May 14 as the men begin their seven-stage, 600-mile event set to conclude in Pasadena on May 20.

THE KING OF CALIFORNIA RETURNS

Sagan, one of the most popular cyclists ever to compete in the Amgen Tour of California will be racing for his recently launched BORA-hansgrohe team hoping to add on to his current record of 15 stage wins including two in 2016. The 2015 and 2016 (current) World Champion will be racing in the Golden State for the 7th consecutive year.

“The Amgen Tour of California has been a superb addition to the Women’s World Tour calendar,” said Guarnier. “As an American, I feel so fortunate to have the opportunity to race at the highest level on American soil. The Amgen Breakaway From Heart Disease Women’s Race Empowered with SRAM creates the most professional platform to showcase women’s racing alongside the long-running men’s race, and the organization ensures that there is media coverage surrounding the event further elevating the exposure of our event for our current, and I dare say our future, fan base.”

“The Amgen Tour of California features a variety of terrains, allowing different types of athletes shine; with the hilly stages and the sprint stages it allows us to demonstrate our breadth of talent within the women’s peloton. I am personally excited to return to the Amgen Tour of California and the rare opportunity to race on home-soil in my current home-State,” continued Guarnier. “I always love racing in front of the home-crowd. It energizes me and pushes me to top performances.”

The 2017 race will mark the first year the men’s race has been elevated to UCI WorldTour status, making it the only stage race in North America to receive this prestigious classification. The upcoming race will also be the tenth consecutive year that a women’s competition will be held as part of the Amgen Tour of California.

The women will start things off with a race around one of the most beautiful race routes in the USA: the Lake Tahoe Loop. The final climb will lead riders up to the finish at the Heavenly Mountain Resort.

Stage 2 – South Lake Tahoe, May 12, 2017
While the race will have a common start and finish at the Heavenly Mountain Resort, the route is entirely new to the Amgen Tour of California. Given that South Lake Tahoe is surrounded by mountains, this will be a difficult day for the peloton. The riders will face summits in excess of 7,300-feet leading to what promises to be a climatic finish.

Stage 3 – Elk Grove to Sacramento, May 13, 2017
The Amgen Tour of California welcomes the City of Elk Grove as a first-time Host City. The women’s penultimate stage will feature one of the most beautiful parks in Elk Grove, before heading south to the California “Delta Region”. While this stage is flat and a welcome relief for the tired legs coming out of the mountains surrounding Lake Tahoe, the winds in the Delta can be menacing and unpredictable. The Sacramento River will lead the riders into Sacramento for an exciting sprint finish in front of the Capitol building.

Stage 4 – Sacramento, May 14, 2017
A fan and racer favorite, the women will take center stage on the finishing circuits around the State Capitol building in Sacramento. The day of racing will be fast and furious and one to remember. If you love watching the men on these circuits, wait until you see the women tearing up the road as they protect the yellow jersey and deliver their sprinter to win on this final day of racing for the women.

Stage 1 – Sacramento, May 14, 2017
The California State Capital hosted the Amgen Tour of California overall finish in 2016, so it is only fitting that it returns for the overall start in 2017. This will be a flat and fast stage that will conclude with exciting finishing circuits.

Stage 2 – Modesto to San Jose, May 15, 2017
It is great to be returning to Modesto. This will be a difficult mountain stage with six climbs and an uphill finish. Fans can expect all of the race favorites to be in the top 10 on the leader board after the conclusion of this stage.

Stage 3 – Pismo Beach to Morro Bay, May 16, 2017
California’s Central Coast and San Luis Obispo County have long been race favorites over the years. This stage will feature another start near the ocean in Pismo Beach and a first-time finish near the harbor in Morro Bay. The stage is designed for a craft sprinter who can handle an uphill sprint to the finish.

Stage 4 – Santa Barbara to Santa Clarita, May 17, 2017
Stage 4 returns to a favorite race start along the beach in Santa Barbara. This will be a familiar course for many of the riders and will feature a fan favorite – Balcom Canyon – concluding with an expected mass sprint finish in Santa Clarita.

Stage 5 – Ontario to Mt. Baldy, May 18, 2017
Mt. Baldy, the Queen Stage! A 26-mile climb to the finish! Switchbacks! Massive crowds! It has been two years since the race rocked the Angeles National Forest and we are back again by popular demand. The fun will start in the City of Ontario setting the riders on a course that will lead the race north up the main artery and a climb will begin and the legs will start to burn. This will also be the site for the amateurs to test their mettle at the annual L’Etape public ride which wil precede the professional race.

Stage 6 – Big Bear Lake Individual Time Trial, May 19, 2017
The riders will take out their revenge on this technical 15-mile course. While it is flat, the 6,800-foot elevation around Big Bear Lake will certainly sap the strength from many of the riders on this penultimate day.

Stage 7 – Mountain High to Pasadena, May 20, 2017
The Amgen Tour of California returns to the Mountain High ski resort for the start of the final stage. While this will be a fast and largely downhill run into Pasadena, the riders will have two significant climbs that will top out at over 7,900 feet. The crowds in Pasadena will be watching the top teams try to deliver their sprinter to the line to claim the finish.