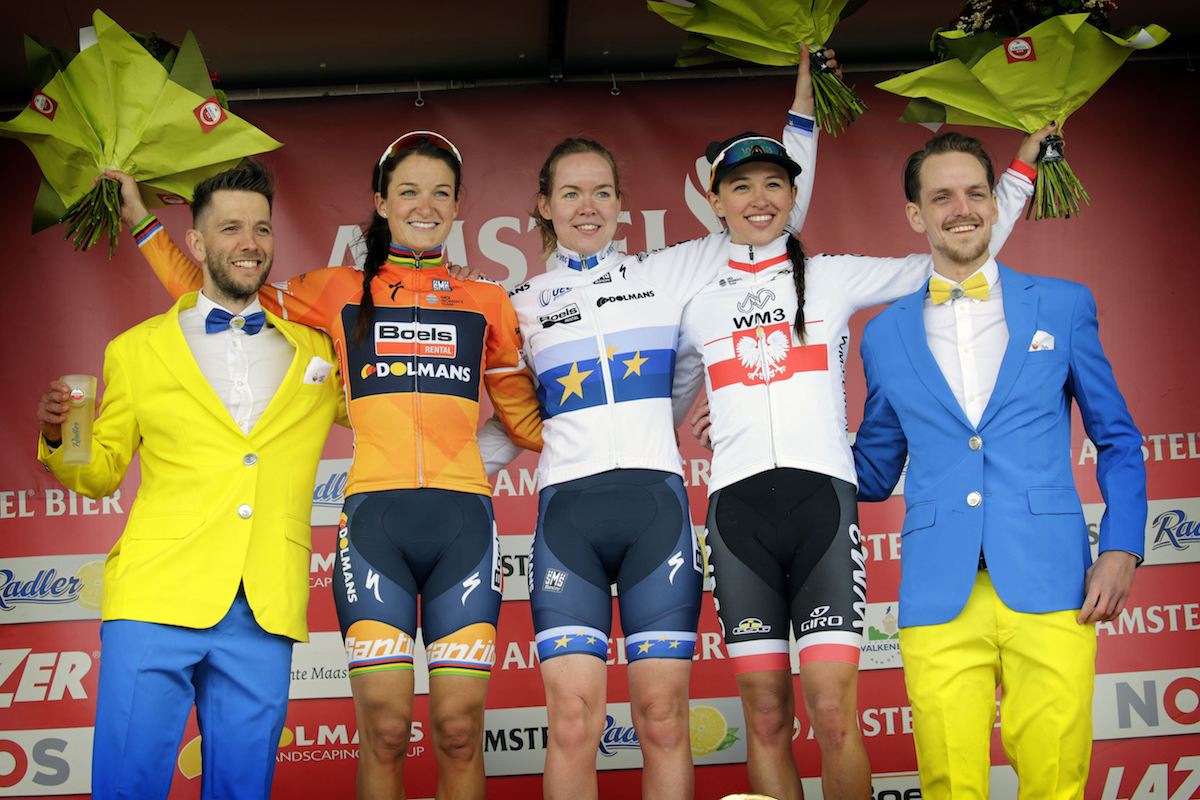 Boels-Dolman’s Anna van der Breggen celebrated victory in the women’s Amstel Gold Race today, after the Dutch rider executed a perfectly timed attack to claim a solo victory, while her teammate Lizzie Deignan won the sprint for second place, making it a one-two affair for the Dutch squad.

Van der Breggen was part of a small group who attacked from a reduced peloton, catching three riders – including Deignan – before powering clear with 6.5km to ride. With her team-mate up the road Deignan was able sit on during the ensuing pursuit.

The 121km event left the center of Maastricht just 20 minutes after the men rolled out, and took in the same opening circuit.

By the time they had reached the Lange Raarberg, the third of 17 climbs, Sara Mustonen (Veloconcept Women) and Marta Tagliaferro (Cylance) had built a gap of 50 seconds. However, the lumpy terrain meant the gap was constantly fluctuating, and they were never able to safely establish an advantage, eventually being caught on the Eyserbosweg.

Here it was the strongest teams who increased the speed, splitting the peloton into two distinct groups.

Over the subsequent kilometers, where the road was exposed to a strengthening wind, Boels-Dolmans worked hard on the front to keep the pace high, and when they passed the finish line for the first time, the winning group of around 35 riders had an advantage of over one minute.

The women’s race used the finish the men have used in previous years, the line just over a kilometre from the top of the Cauberg.

This first passage took the race onto the first of three laps, each containing the Guelemmerberg and the Bemelerberg, before concluding on the Cauberg. It was after the first pass of the Bemelerberg where the pace increased significantly sparking repeated attacks.

The second half of the race was extremely aggressive, attacks coming throughout.

Boels-Dolmans managed to place all six of their riders in the group of 35, setting up the win for van der Breggen.

With a group of four up the road including Amy Pieters, the Dutch team were sitting pretty in the group behind, and when that quartet were caught on penultimate climb of the Cauberg, Deignan’s breakaway formed.

WorldTour leader Coryn Rivera (Sunweb) Once again proved her might by clinging to the ending group until the final climb, finishing in sixth place and retaining her position at the top of the overall standings.