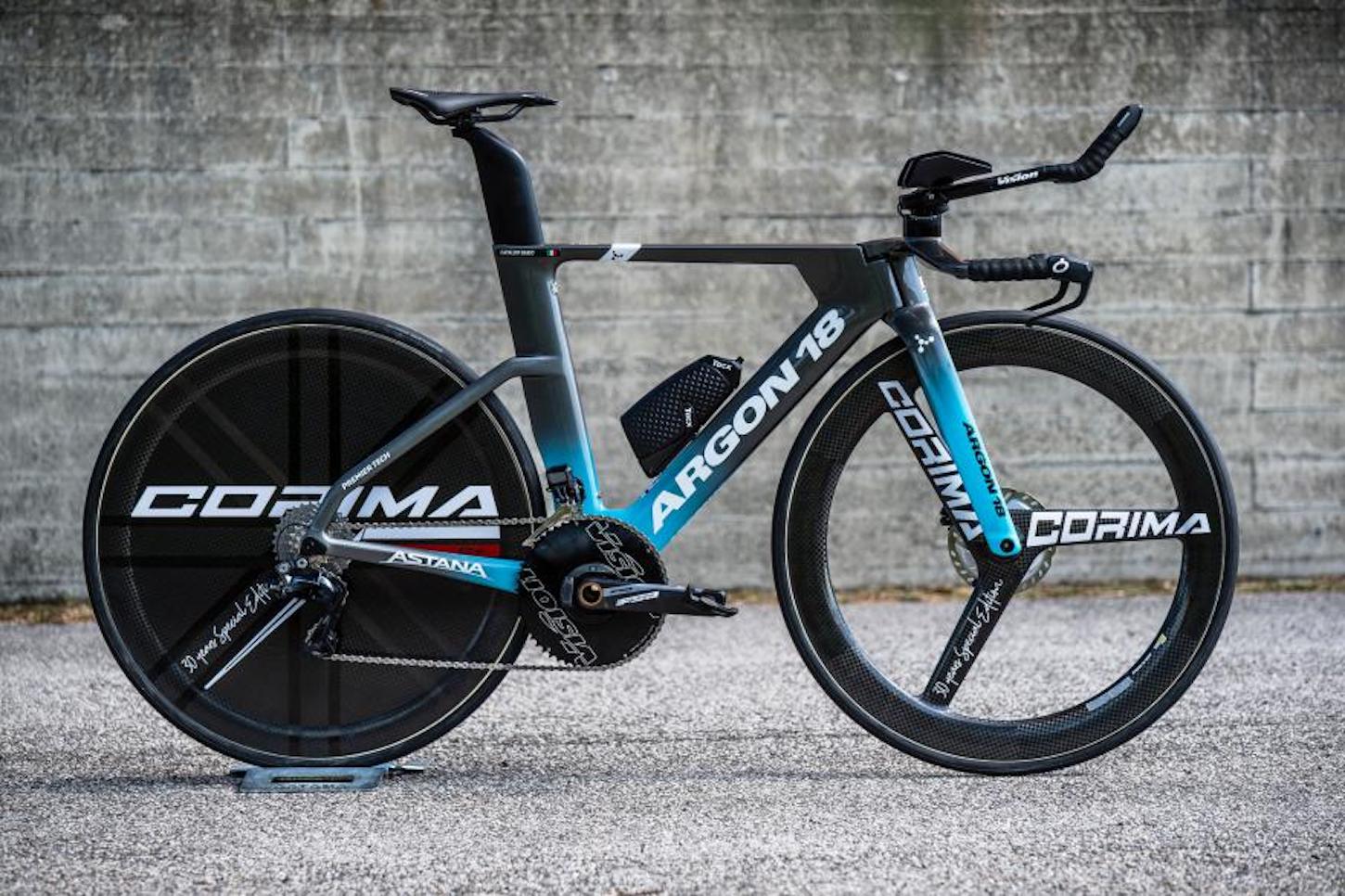 13 May 2019
By Gianni Pericolo - In FEATURED ARTICLES, LATEST ARTICLES, THE DOUBLE DIAMOND

Argon18 unveiled its latest E-118 Pro time trial bike at the start of this year’s Giro d’Italia, which made its debut during the opening prologue under the auspices of Team Astana.

According to Argon18, development of the E-118 Pro got underway a year ago, when Astana asked the Canadian company to refine its previous model, relaying heavily on computer simulations and onboard rider feedback to create a new model that was both lighter and more aerodynamic, as well as provided better positioning for the rider.

In the end, Argon18 claims the new TT bike “gives riders an average of 8 to 10 watts more at 50 km/h compared to their previous bike.”

Astana pro riders Gorka Izagirre and Miguel Angel Lopez further extol this claim by saying, “after going to the velodrome to test the new TT bike and going out on the road in real conditions, I could feel a clear advantage using the new bike. The course we used on the road was not totally flat, because we wanted to test cornering, accelerations, handling among other things. I like the E-118 Pro a lot. I am more stable, have better accelerations and cornering, and feel faster overall,” said Izagirre.

“I have been using the E-118 Pro in Colombia during a few training sessions and quickly noticed the improvements. The new bike is much more comfortable and steering the bike is also easier in the descents. I am happy that the bike offers a better fit window for smaller riders like myself, especially with the cockpit, it allows me to get in a better aero position. Now, I am waiting for the start of this Giro d’Italia with great interest and impatience,” adds Lopez.

While the E-118 Pro differs little in appearance from its predecessor, it gets both a new hinged fork and an integrated stem/handlebar design with improved armrest cups and pads, while the rear triangle has a more pronounced drop and pinched dropouts in order to clear the disc brake caliper.

Additionally, the frame also underwent some slight tweaks with regard to tube profiles, along with the adaptation hydraulic disc brakes, 12mm thru-axles and flat mount calipers, while all cables and hoses are now internally routed.

“The new E118 Pro is the result of the optimal collaboration between a bike manufacturer and a pro cycling team. There have been numerous exchanges between the riders and technical staff of Astana Pro Team and our R&D team in order to design the next level of Time Trial bike. Our partnership allowed us to challenge ourselves to reach new levels and now, with this new bike, we look forward to many more victories,” says Gervais Rioux, Founder of Argon18.

So far, there’s no word on pricing or availability, but rest assured all eyes will be upon the new E-118 Pro as it continues to make its debut during this month’s Italian Grand Tour.