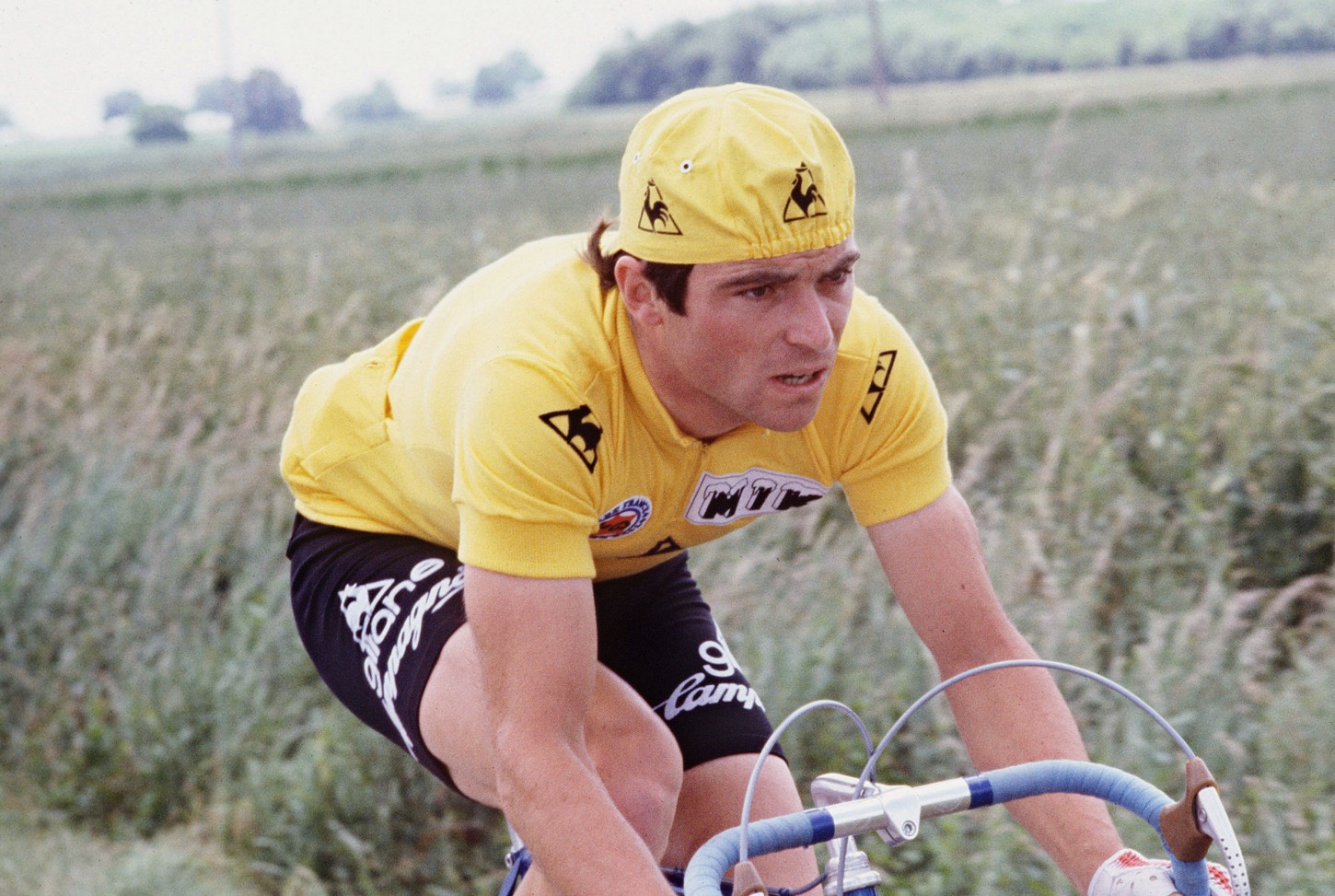 Happy birthday to Bernard Hinault, who was born on this day in 1954.

Hinault was nicknamed Le Blaireau (either “the shaving brush” or “the badger”), as he would often do a hairband, thus resembling a shaving brush. However, his nickname is typically translated as “badger” by Anglophone cycling commentators and enthusiasts. In an interview in the French magazine Vélo, however, Hinault said the badger nickname had nothing to do with the animal. He said it was a local cyclists’ way of saying “mate” or “buddy” in his youth – “How’s it going, badger?” – and that it came to refer to him personally. According to Maurice Le Guilloux, a long-time team-mate of Hinault, he and Georges Talbourdet first used the nickname when the three riders trained together in their native Brittany in the early years of Hinault’s professional career.

Hinault began his  professional cycling in 1974, at the urging of Cyrille Guimard, who was ending his career in part due to a knee injury. Guimard became a directeur sportif for the Gitane team and Hinault joined his team.

In 1976, Hinault scored an early victory in Paris–Camembert. He demonstrated his time trial strength as he maintained his thin lead to the finish. That year, Guimard spurred Lucien Van Impe to his only win in the Tour de France. Taking Guimard’s advice, Hinault did not enter in 1977. Yet he had demonstrated his talent in the Critérium du Dauphiné Libéré where he beat many Tour favourites including eventual winner Bernard Thévenet. Of note in the Dauphiné Libéré that year was one of the mountain stages. Hinault, wearing the yellow jersey, was at the front after an attack on the ascent and heading for victory. But he crashed descending the mountain, climbed up from the roadside and got back on his bike for the win in Bastille of Grenoble.

To prepare for the 1978 Tour de France, Hinault rode his first grand tour, the Vuelta a España. He won and felt ready for his first Tour de France. Before the Tour, he won the national championship, which allowed him to wear the tricolour. This tour became a battle with Joop Zoetemelk, Hinault taking the yellow jersey after the final time trial. He was hailed as the next great French cyclist and won the Tour again in 1979.

At the start of the 1980 season Hinault and Guimard’s aim for the season was to win cycling’s Triple Crown – the Giro d’Italia, the Tour de France and the world championships, which had previously only been won in the same year by Eddy Merckx. Hinault won that year’s Giro, clinching the race with an attack on the Stelvio Pass. In the 1980 Tour de France he abandoned the race while wearing the yellow jersey because of a knee injury but he returned to win the world championship in Sallanches that year.

The following year, 1981, wearing the rainbow jersey, he won Paris–Roubaix and returned to victory in the 1981 Tour and then again in 1982. He missed the Tour in 1983, again because of knee problems. The organiser, Jacques Goddet, said in his autobiography L’Équipée Belle that Hinault’s problems came from pushing gears that were too high. During Hinault’s absence, his teammate Laurent Fignon rose to prominence by winning the Tour in 1983.

In the 1984 Tour de France Fignon won with Hinault second at more than 10 minutes. Disagreements with Guimard led to their separation, and by the mid-1980s Hinault had become associated with the Swiss coach Paul Koechli and the La Vie Claire team. Koechli introduced meditation and relaxation, and these helped Hinault return to the Tour with a victory in 1985. That year he rode much of the race with a black eye after a crash. In 1985 Hinault’s lieutenant Greg LeMond was under pressure from Koechli and his team manager to support Hinault and not try for victory. Years later, LeMond claimed in an interview that they had lied about his lead over Hinault in a mountain stage, forcing him to lose several minutes and his chance of victory.

Hinault also rode the 1986 Tour, ostensibly to return LeMond’s favor of the previous year and help him win. Hinault rode an aggressive race, which he insisted was to demoralize rivals. He claimed his tactics were to wear down opponents and that he knew LeMond would win. Laurent Fignon and Urs Zimmermann were put on the defensive from the first day. Fignon quit due to injuries aggravated by stress. In the Alpe d’Huez stage Hinault mounted an early attack that gained a lot of time. LeMond then chased down Hinault and eventually took the yellow jersey from his teammate. LeMond was later quoted as feeling betrayed by Hinault’s tactics.

Hinault was a “boss of the peloton” or Patron. He was prominent in a riders’ strike at Valence d’Agen in the 1978 Tour to protest against split stages, in which the riders had to ride a stage in the morning and another in the afternoon. He also imposed discipline and often cooperation among riders, once famously decreeing that “there will be no attacks today because tomorrow’s stage will be difficult”. He was respected by riders but feared by many for his temperament. If he felt slighted by another rider he would use his strength to humiliate the offender. To the public, Hinault was often arrogant, remote, and shy of publicity. When an interviewer suggested he devote more attention to fans, Hinault replied, “I race to win, not to please people”.

After retiring in 1986, Hinault returned to farming in Brittany and worked for the Tour de France organization, appearing at stage finishes to greet stage winners and jersey holders. He also worked for Look, whose owner Bernard Tapie also owned the La Vie Claire team, as a technical consultant and helped develop the Look clipless pedal. He has now finished with farming and in 2008 returned to cycling, but not to racing. Hinault has lost none of his fire in recent years: upon seeing a protester jump onto the podium at the end of stage 3 of 2008’s Tour de France, in front of the winner, Samuel Dumoulin, Hinault leapt forward without hesitation and shoved the protester off. In December 2013 it was announced that Hinault would be taking on a role as “patron” with the British Team Raleigh-GAC squad for the 2014 season.