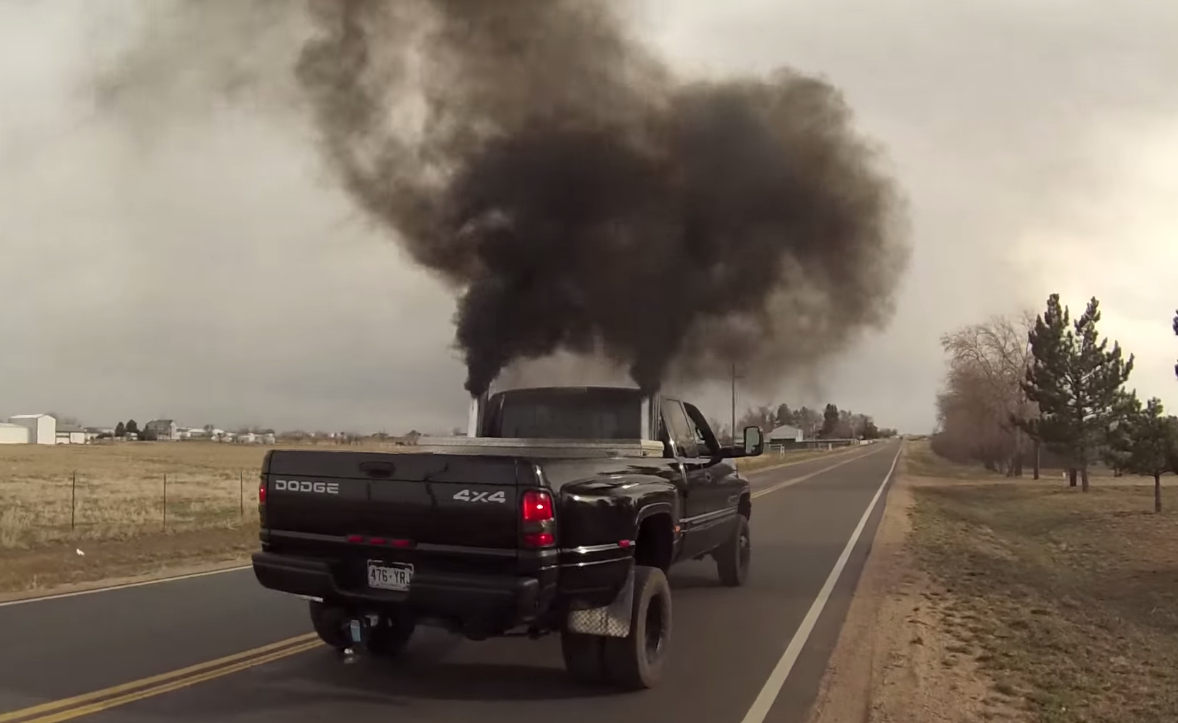 The roads belong to everybody, roadies included. But some people don’t see it that way. When they see you out on the road, it pushes their tribal buttons. You’re not their “tribe,” and sometimes, they feel compelled to express their tribal hostility — and some of them know just what to do. They flick a switch on their dashboard, floor the pedal, and suddenly you’re enveloped in thick, billowing black clouds of diesel exhaust. It’s so common that it’s got a name — “rolling coal” — and thousands of photos, videos, and other assorted Internet posts documenting the phenomenon.

And it’s not just cyclists who are targeted by these coal-rollers. Pedestrians, women, and other motorists, in particular Prius drivers, are also popular targets for their abuse.

The roadways are really kind of the last frontier for the anti-environmental “rebel” who wants to flaunt environmental violations, intimidate fellow road users, express their beliefs, and otherwise simply have fun doing whatever the hell they want. Crop dusting a cyclist is a coal rolling twofer: you score for road raging against a non-preferred road user and pick up points for nailing what they consider a “nature nuffie” — someone who is not polluting at maximum levels possible.

The thing is, Prius drivers can keep their windows up and quickly pass through the plume, but a rider, especially one on a climb, can be stuck in a long plume of poison for a minute or more. Because cyclists use their lungs to power their vehicles, this nuisance is actually a serious health risk. Further, being hit with one of these plumes can impair visibility.

“That’s how diesels work, don’t you know anything? It was just a joke! Can’t you take a joke?”

But with all of the video and photo evidence out there — these guys actually document their assaults — it must be legal for them to roll coal on you, right?

Wrong. It’s a violation of the Clean Air Act to tamper with the pollution control system of a vehicle, and the EPA has even gone on record as saying that rolling coal is against the law, with large fines assessed against equipment manufacturers and mechanics who perform the modifications. Even the drivers of these modified vehicles are subject to fines if caught (although that is a big “if,” because they know how to game the vehicle testing system). All of which underlines another reason these guys roll coal — it’s a big middle finger to the EPA and anybody who wants clean air in general.

But sometimes stupidity backfires. After some nameless assailant rolled coal on a Prius-driving New Jersey state legislator, a law was passed specifically prohibiting “rolling coal.” Other authorities are beginning to look at the problem too. In Illinois, a proposed bill would specifically prohibit rolling coal, with a $5,000 fine applicable to convicted drivers. And in Fort Collins, Colorado, prosecutors are treating rolling coal as an “exhibition of speed.”

Rolling coal is about acting out without consequences, about pranking other road users for fun, or perhaps even protesting progress. But as we can see, there are consequences if somebody decides to do something about it. And because cyclists are the natural targets for coal rolling, we have to be the most aggressive about stopping it.

Report the assault to law enforcement. Colorado has a program where cyclists can report harassment to law enforcement, but even if your state doesn’t have a similar program, you should still file a report. Be prepared to show evidence, ideally video with the truck and license plate clearly identifiable, along with the blast of exhaust. If you don’t have your own video, search the Internet. These guys aren’t the brightest, and they may have recorded and posted their assault online. You can also back up your account of what happened with witness statements. If you can get an account from somebody who was not part of your riding group, all the better.

Finally, report the offender to your state’s clean air agency. As an example, California has a reporting system for gross polluting vehicles. Your state should have a similar reporting program.