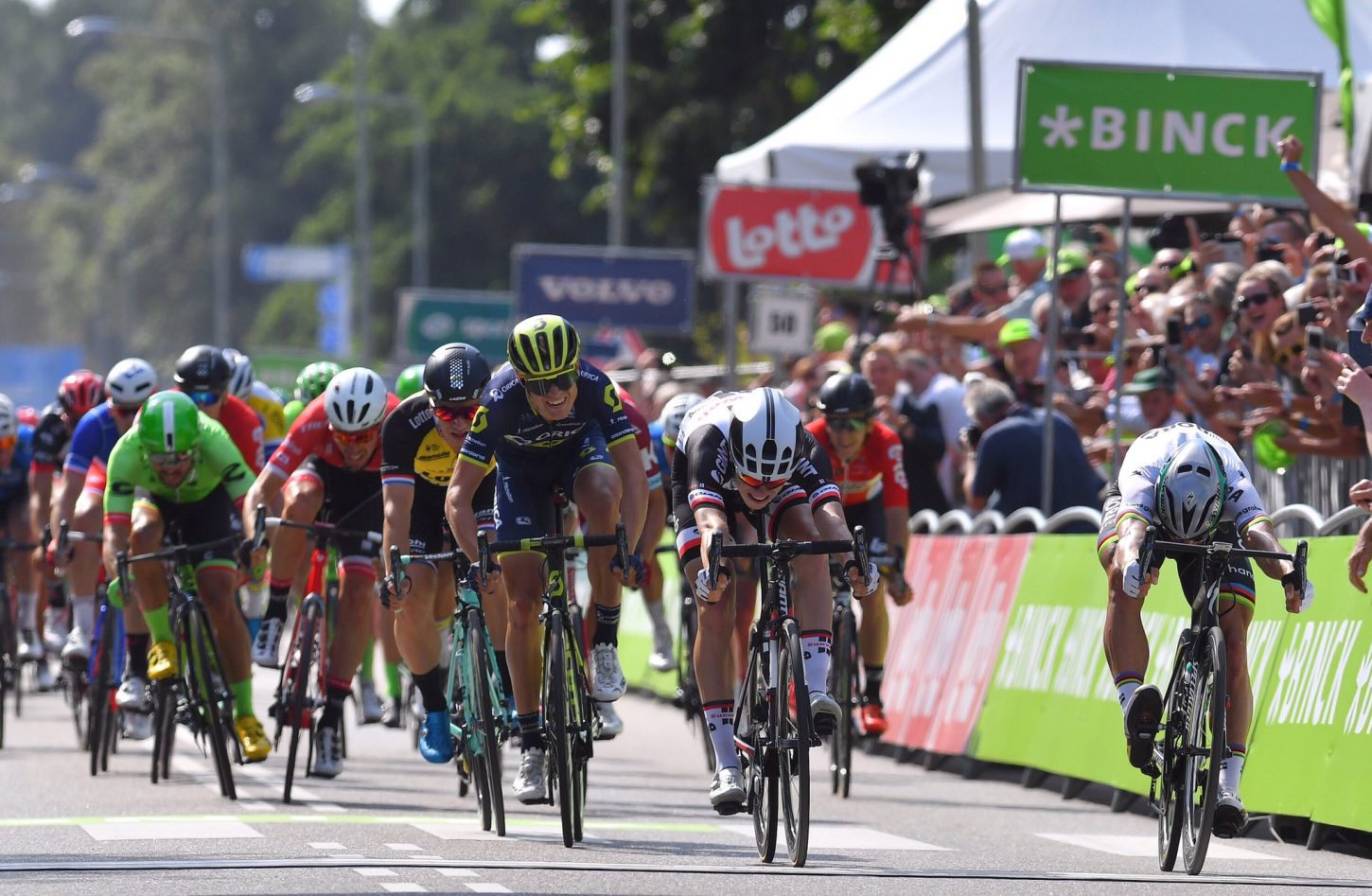 Peter Sagan won the opening stage of the Binckbank Tour today, after beating Phil Bauhaus by mere millimeters in a sprint finale in the Dutch town of Venray, to claim the race’s first green leader’s jersey.

From there, the quartet went on to establish an advantage of 2:30 over the peloton.

Meanwhile, along with several other sprinter’s teams Team LottoNL-Jumbo was working hard for Dylan Groenewegen, who won last year’s opening stage in Bolsward and was victorious a couple of weeks ago on the famous Champs Elysées in the final stage of the Tour de France.

The peloton let the four escapees fight for the Primus Combativity standings and the bonus seconds of the Binck Gouden Kilometer before reeling them in with two kilometers to go.

Jasper De Buyst tried to surprise the bunch with a late attack, but the Lotto-Soudal didn’t manage to stay out of the peloton’s reach.

Sagan started his sprint from a long way back and narrowly managed to hold off his German rival, while Magnus Cort Nielsen rounded out the podium in third.

Setting the tone for what would undoubtedly be a fast, combative stage, the breakaway group got underway as soon as the commissaire started the stage.

While the sprinters wouldn’t want to be denied a fast finale, there was plenty of time to reel this escape group in towards the end of the day, and so the break was left to their own devices. The pace was fast, with both the escape and the peloton riding at high speeds in the beautiful Dutch weather, with the gap never exceeding two minutes as a result. Keeping watch at the head of the peloton, BORA-hansgrohe’s German Champion Marcus Burghardt made sure that as the finish edged closer, the break was slowly brought back in, and with there being no race leader to protect, the other teams in the bunch were working with the German rider to make this happen. Safe in the bunch, the UCI World Champion, Sagan, had his eye on the stage victory, and was being protected by his teammates ahead of the finale.

The gap dropping ever lower, there was a risk of making the catch too early, allowing another, more dangerous breakaway to go ahead. With this in mind, as the gap hit almost thirty seconds, the peloton reduced its speed and allowed the escapees an extra minute, confident they would be able to bring this back quickly in the final kilometers. In the space of just 10 kilometers, the group managed to reduce the gap from 1:40 to just fifteen seconds, and with the break looking over their shoulders and seeing the mass of the peloton looming large, they knew that after more than 160 kilometer on the front, it would be all back together for the final sprint.

In the final kilometers, a succession of roundabouts and street furniture made the going hectic, splitting the bunch as the sprint trains massed to bring their riders to the line. With the other sprinters starting some way back, Sagan spurred into action closer to the line.

As others dropped off, the distance just too far to maintain their speed, Sagan kept going, taking his 98th professional victory and his third in this event.