City Bans Cars for a Month. Will Others Follow ? 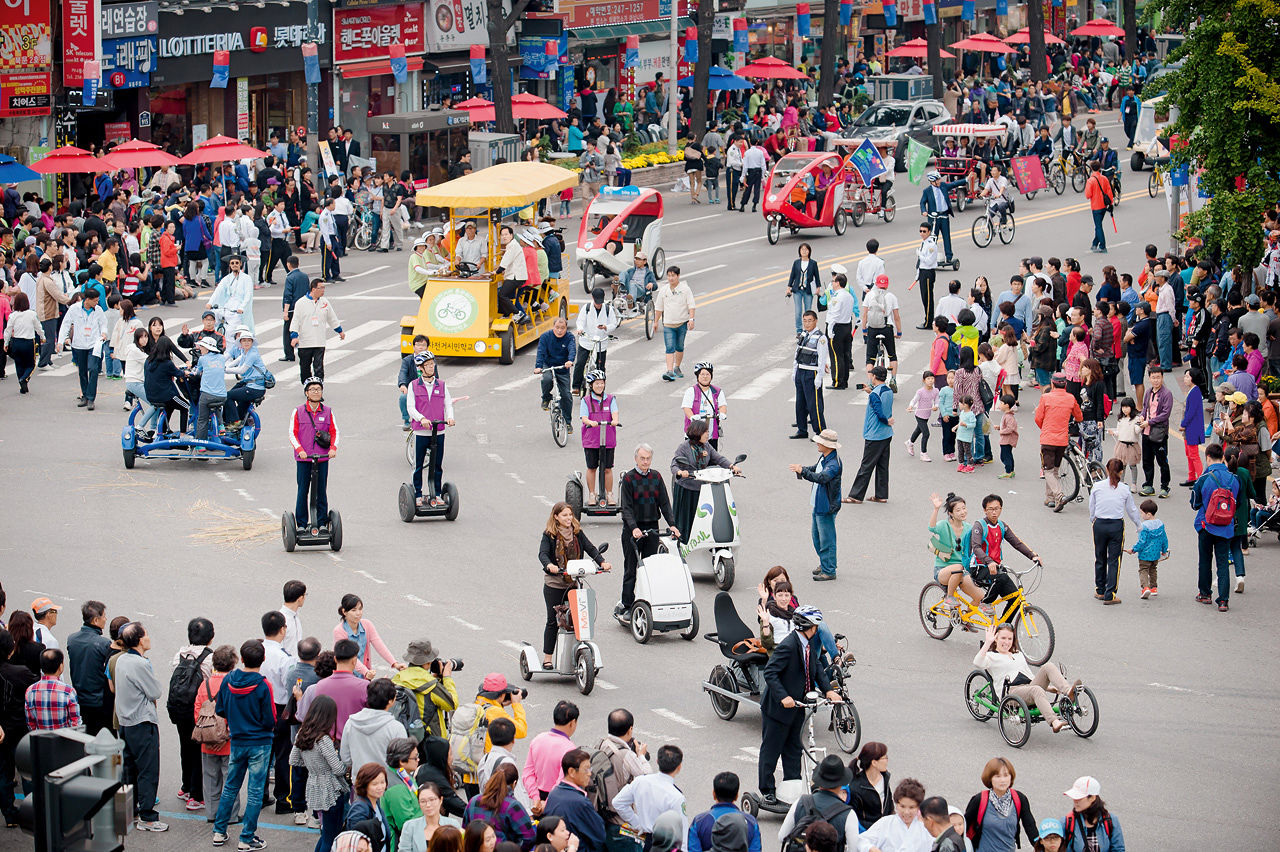 Two years ago, the City of Suwon, South Korea, undertook an experiment, where it banned cars from its street for one month, as part of global initiative called – the Eco-Mobility World Festival.

The goal was to “mobilize and raise local and international support for ecomobile alternatives to fossil-fuel transport.”

As a result, the city’s 4,300 residents adopted an ecomobile lifestyle to experience how traveling through integrated, socially inclusive, and healthy transport options can positively change their routines. The residents used a variety of vehicles such as bicycles, trailers for carrying children and goods, tandem bicycles, recumbent bikes, pedelecs (electric assisted bicycles) and velo-taxis.

And although the festival lasted only a month, the after-effects are still being felt.

Indeed, after the festival ended, the city also gathered residents for a huge meeting to ask for ideas for more permanent changes. The biggest result: The speed limit was cut nearly in half, to about 18 miles per hour. That meant that commuters no longer wanted to use the neighborhood as a shortcut, and traffic started to disappear. Neighbors also decided to eliminate side parking on some major streets — and parking on sidewalks — which helped encourage people to start walking and biking to run errands.

According to festival creative director Konrad Otto-Zimmermann, “it takes that long for people to really adapt; any less and people can just rearrange their appointments and work around it. “It has to be a month in order to hit people’s daily agenda, so they really experience ecomobility in their daily life.”

To many. the event in Suwon laid the foundation for other cities around the world to get “ecomobile”.

This year, Johannesburg, South Africa, will follow in the South Korea city’s footsteps as well. Which raises the question, could this happen in North America?

One of the partners behind the festival is ICLEI, an organization that helps cities and local governments reach sustainability goals — and one that is being banned in city after city in the U.S. for being part of a United Nations’ plot to impose sustainable development. It is often accused of trying to take away peoples’ cars.

For example, when Toronto tried closing its streets for a day, the mayor reacted by saying, “We have parks for people to walk, for exercise, to do yoga. You don’t have to close down a major street to walk, do yoga — that’s for parks.”

But as Gil Peñalosa of 8-80 cities (a nonprofit organization based in Toronto dedicated to helping cities become more pedestrian- and bike-friendly) notes, “we have to break out of this mindset and take back the streets”.

According to advocates, “building more roads to solve transport problems is like putting off a fire with gasoline. We should put pedestrians as our priority and question the role of streets. People need to walk, and walking must be best friends with cycling and public transport”.

What is the message of Suwon ?

Environmentalists say, “cars have their place, but they shouldn’t dominate the city; they should play nice with cyclists and pedestrians. When changes are made that affect daily habits, people adapt. So slow down the cars, promote alternative means of transport — because streets are for people.