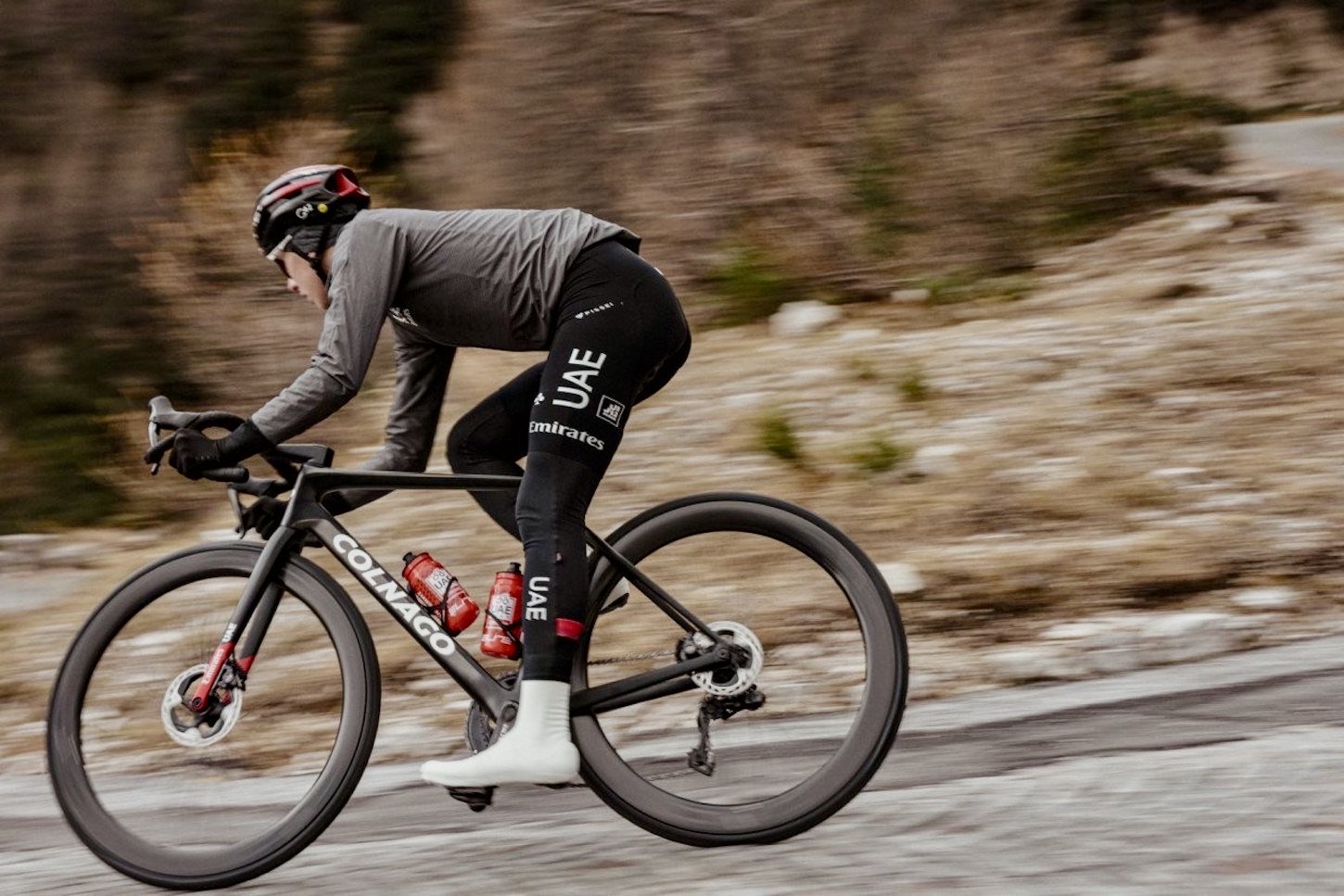 After teasing enthusiasts with its Prototipo last summer, Colnago has officially unveiled its new V4Rs road bike, touting it as the iconic Italian brand’s “fastest monocoque frame ever”.

“We are pleased to introduce the new V4Rs, its fastest monocoque frame ever, a unique bike to excel on all types of terrain, developed in collaboration with one of the strongest WorldTour cycling teams. The UAE Emirates Team contribution was fundamental in the long prototyping phase and subsequent road tests and then directly in races; the input received from the riders made it possible to work on clear and defined areas, such as: aerodynamics, weight, real dynamic stiffness, geometry, robustness and reliability,” boasts Colnago.

“The V4Rs has been designed as an integrated system, i.e. as a complete bicycle in a “ready-to-race” configuration. The technical work focused on reducing the impact of the frontal area, basically the head tube, and the consequent better integration with the fork crown. While being compatible with third party components, V4Rs has been conceived to offer the best aerodynamic performance in combination with the Colnago CC.01 handlebar, which is also bolstered with a 3D printed support, currently compatible with Wahoo Bolt V2 and able to guarantee a further saving of 0.75 watts at 50km/h,” claims Colnago.

Colnago says it wasn’t easy to improve the of the weight of the V4Rs over its predecessor, so they took a holistic approach to shaving grams, focusing on the overall module (frame, fork, headset and handlebar) instead of of each individual component. The final result allowed them to save 47 grams, comparing the V4Rs frame kit with CC.01 handlebar (+ headset) to the V3Rs frame kit with Colnago Sr9 stem and Colnago Hbr41 handlebar (+ headset).

Colnago developed its own stiffness measurement system which it calls ‘Real-Dynamic Stiffness’, and used this to compare prototypes in the development of the R4Rs.

“During riding, a bicycle is subjected to several different loads, acting on the whole bicycle at the same time. To replicate and measure in indoor testing procedures able to stress the frame in many of these conditions simultaneously, our engineers needed to develop internal testing methodologies to take into account both static and dynamic, and both flexural and torsional loads,” Colnago says.

“To mimic riding in the sprint condition, a combination of loads is applied both on the handlebar and on the bottom bracket, with both components laying on the front triangle plane and normal to the frame plane, aimed to simulate the flexural and torsional stresses at oscillating cambers.

“To mimic riding in the seated position condition, loads are applied only on the same plane of the front triangle to replicate all-round riding.”

According to Colnago, its testing revealed the V4Rs to be 4% stiffer than the V3Rs in the sprint position and 5% stiffer in the seated position.

This result has been achieved thanks to the innovative carbon fiber lamination featured on the V4Rs,” says Colnago. “For the ultimate racing machine, many different layups featuring as many different stiffness matrices, have been developed, tested and validated for professional use.

“The final call was given to the riders themselves, who were provided [with the bike] for the most complete and stressful competition of the year (Tour de France 2022) with ‘Prototypes’ with the most promising layups [the arrangement of the layers of carbon fiber), in order to bring the bicycle to real limit conditions (on cobblestones, in sprints, on climbs and downhills) and provide data and feedback to our engineers.”

Based on the input received from professional cyclists, Colnago says the geometry of the new V4Rs was redesigned to provide even greater balance across all sizes, creating a more linear reach across all sizes, while the length of the chainstays has also been reduced.

“The V4Rs (compared to the V3rs) can boast greater impact resistance of the parts most exposed to shocks in racing conditions. An example is the brand new seat stays, which, in addition to the more aerodynamic shape, significantly increase resistance to bending and impact. On the other hand, sturdiness means being able to reduce the need for maintenance to a minimum. A practical example is the new CeramicSpeed headset with SLT (Solid Lubrication Technology) which, thanks to its exclusive solid polymer and the stainless steel components, prevents two of the most common causes of bearing failure: the absence of lubrication and contamination of the grease due to dirt. The V4Rs, before the consolidation of its definitive version, underwent a long study phase in collaboration with the UAE Emirates Team, which raced part of the last season with the Colnago Prototipo, a name indicative of the study phase then in progress. Different layups (the overlapping of a specific number of layers of carbon fiber) were tried before reaching the final version and participating in a race as tough and complicated as the Tour de France, for example, allowed us to reach a result of the highest level in terms of quality and robustness,” explains Colnago.

Additionally, the fork has been designed to offer space for tires up to 32mm wide. Although the upper headset bearing is larger than that of the Colnago’s previous V3Rs, allowing the cables to run internally without the need for a D-shaped steerer tube, the overall shape is said to offer lower drag.