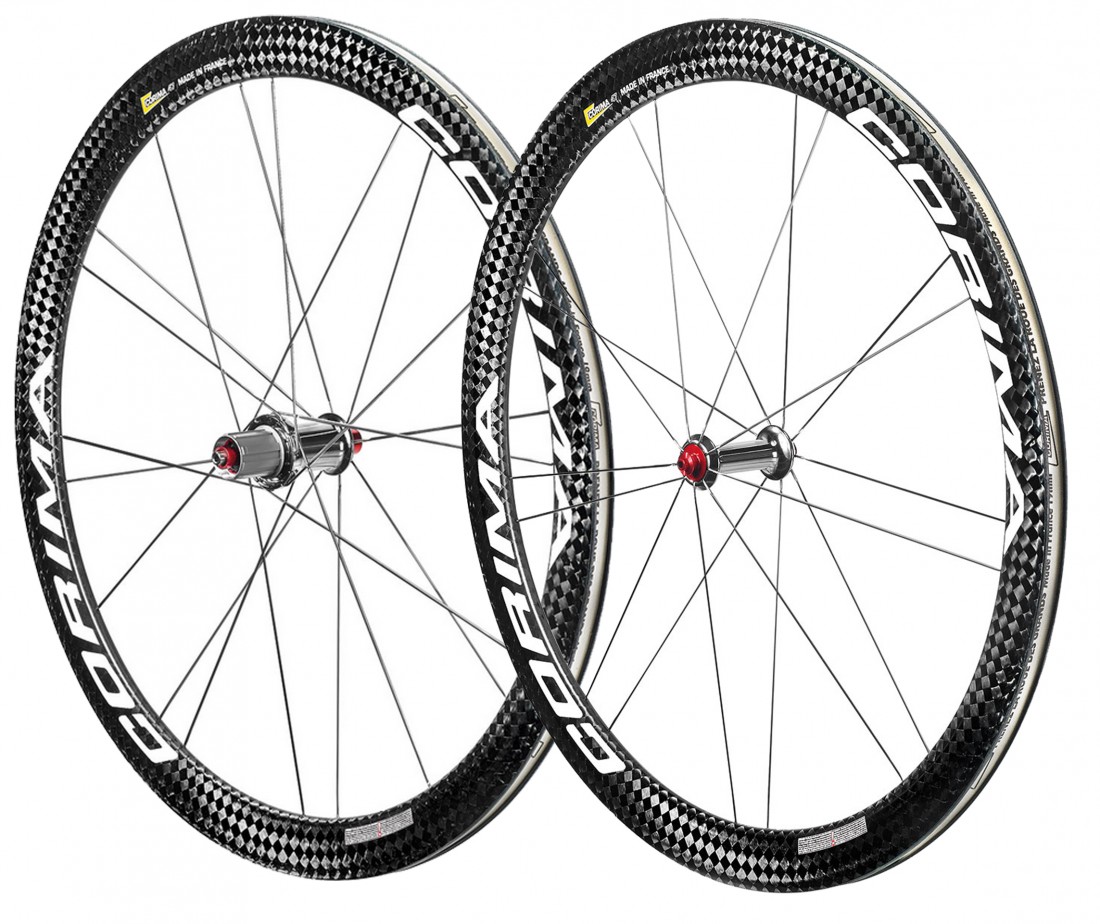 review by Adam Atherton, aka “Hondo”

In putting the Corima hand built 47mm full carbon clincher wheels through their paces, I was instantly impressed with the overall quality of ride and the responsiveness they delivered with the ever changing road conditions. Corima, based in France, is the pioneer of carbon fiber wheel manufacturing, design and engineering and it is evident not only in the visual appeal of the wheel set but more importantly in their speed, stiffness, responsiveness, comfort, aerodynamics, handling and braking which are all top of the charts.

In looking at the criteria that matters most in the above categories for all-around wheelsets (all around as defined as the ability to perform on hills, flats, false flats, straights, corners, sprints, mountains, fast downhills, windy roads) I broke it down into four areas. First, Performance:  Versatility, aerodynamics, stiffness, acceleration, comfort, handling and braking. Second, Design:  Wheel weight and material, rim depth, rim inner and outer widths, rim profile, hub and spoke selection, and wheel finish. Third, Quality: Durability, warranties and service/support. Fourth, Cost:  Purchase price, cost of ownership and replacement cost.

The Performance of this wheelset is by far the best I have experienced in my twenty years of cycling and I have ridden many top end wheelsets from many manufactures.  What makes the Corima’s stand out, is the attention to detail and homogeneity that goes into every one of the company’s carbon wheelsets. Unlike some manufacturers who only produce one aspect of the wheel, or are purely focussed on just one performance trait such as lightness, rigidity, or having the best climbing or aero wheelset – Corima takes a holistic approach to all of its wheel designs.

Indeed, the “S”‘s versatility is readily seen in their ability to climb but equally impressive is their ability to accelerate out of the bunch.  This is largely due to their superior rim technology which begins with Corima’s exclusive molding technique and new rim design called Concept 2D which reduces drag, increases the flow of air past the rim and increases rigidity. They don’t go into too much detail as to the process of the rim design but they divulge that the internal part of the rim is filled with a state of the art material.  This added material might add a few grams to the overall weight of the wheel set but it is worth it from a comfort, handling and braking perspective. Having cycled on and been battered by many ‘hard’ New England roads, the comfort of the ride was instantly noticeable and quite remarkable. This stood out to me, in particular, the day after a long weekend ride when normally my shoulders and arms would be in bits; I awoke feeling fresh and ready to ride. In talking about the ability to stop the bike, I immediately noticed the braking power of this wheel set in both wet and dry conditions. Equipped with Corima brake pads, I tackled steep downhill and windy roads with confidence I have never experienced before. I was able to take more risks and challenge the bike more knowing I had the best carbon wheel sets driving me forward. I can’t say that about other high end carbon wheel sets where a ‘lag’ in braking responsiveness and braking ‘shutters’ have been the norm.

As mentioned, the Design of the Corima carbon clincher is unparalleled.  With a striking carbon weave finish and simple Corima logo this wheel set is a head turner. The rims are comprised of a 12 K Carbon weave.  The 18 spoke front wheel weighs in just under 665 grams. The rear wheel is comprised of 20 spokes and weighs 905 grams. Both have a width of 22.6mm and are equipped with precision Corima hubs which have an aluminum, chrome polished finish (Corima’s S+ wheel set and upward feature a property carbon shell hub), along with a 30-tooth free-wheel ratchet ring and a 17 mm titanium/aluminum spindle. All of Corima’s spokes are hand built and crossed three times to provide the best possible transmission of power.  This arrangement of crossing the spokes three times allows for equal tension across all spokes making the wheel faster and stiffer. This system also improves the wheel’s ability to remain true and increases the spokes durability. The profile of the rim is triangular in shape and called Concept 2D – this new technology reduces drag and increasing air flow, maximizes wheel revolution and adds to the rigidity of the rim.

The Quality speaks for itself as Corima has been manufacturing high performance carbon wheels for over 22 years. Several professional cycling teams, like team Astana, have chosen Corima as their official wheel.  A unique service that Corima offers all their customers is a after-sale repair service.  If your wheels are damaged in a crash or accident, contact a Corima specialist directly by phone or e-mail. Thankfully, I haven’t had to use this service but from my discussions with Corima professionals, I am confident that they will work to the highest of standards to get the job done.

The Cost of this wheel set is at the high end of the spectrum for carbon wheels. It’s worth acknowledging that the price tag could stand as a bit of hurdle, so I expect to see them being used more exclusively for racing rather than training.  But either way, you’re going to get your money’s worth.

The take away is simple: the 47 inch Carbon Clinchers accelerate well and more importantly, they hold speed, cut through cross winds, dampen rough roads, and climb with grace and ease. Honestly, I’m happy to say that they are a complete all-around wheelset that will not disappoint.