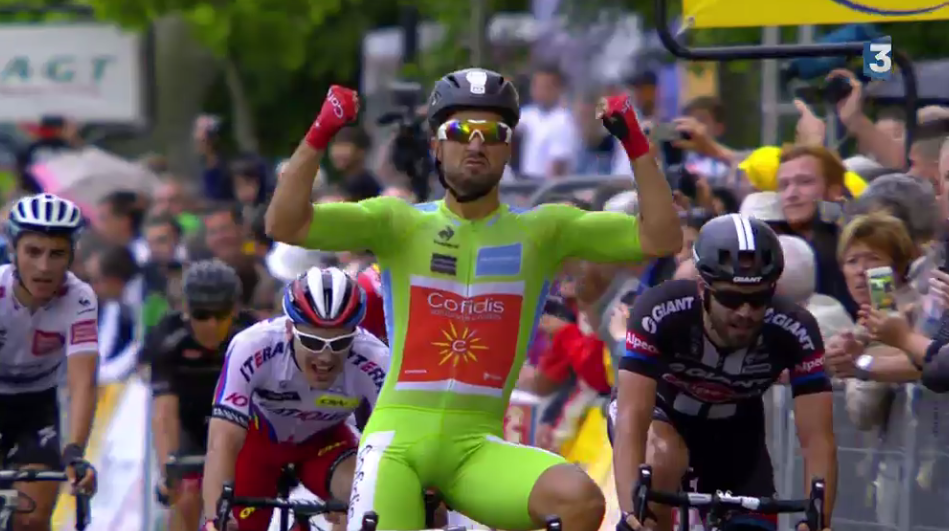 In another thrilling finale with many attacks behind long lasting leaders Martijn Keizer and Tosh Van der Sande, Nacer Bouhanni managed to collect a second stage victory for Cofidis in a bunch sprint even though he was left with only one team-mate (Julien Simon). Rohan Dennis (BMC) kept the yellow-blue jersey one ahead of the much awaited legendary stage to Pra Loup.

163 riders started stage 4 in Anneyron-Porte de DrômArdèche. It was the longest stage of the 67th Critérium du Dauphiné with 228 kilometers to be covered. After three kilometers, Martijn Keizer (LottoNL-Jumbo) and Tosh Van der Sande (Lotto-Soudal) rode away. They got a maximum advantage of 8.05 after 40 kilometers. The BMC Racing Team of race leader Rohan Dennis put two riders, Joey Rosskopf and Dylan Teuns, to set the pace of the peloton and maintain the same difference of about six minutes between them and the escapees. Luis Angel Maté also indicated that Cofidis targeted a bunch sprint finish for Nacer Bouhanni in Sisteron.

The time gap remained just above six minutes for a couple of hours. With 25km to go, it was 4.25 and MTN-Qhubeka decided to speed up while Etixx-Quick Step contributed to the chase as well. Keizer continued solo in the côte de la Marquise with 13km to go as Cyril Gautier (Europcar) fired up the peloton. Tim Wellens (Lotto-Soudal) was first to rejoin Keizer with 8km to while Wilco Kelderman (LottoNL-Jumbo), white jersey wearer Julian Alaphilippe (Etixx-Quick Step) and Vincenzo Nibali (Astana) were very active as they tried to escape from the peloton.

Lotto-Soudal shows off till the end with Gallopin

Wellens was reined in with only 2.5km remaining. His team-mate Tony Gallopin, the third Lotto-Soudal to occupy the front scene on that day, was next to attack just before the flamme rouge. He found an opportunity to imitate Peter Kennaugh’s winning effort on stage 1 but although hot favorite Nacer Bouhanni looked isolated, Julien Simon, the only team-mate he had left on his side closed the gap onto Gallopin. The addition of the places was tight between Rohan Dennis and Tejay van Garderen but they finished in that order, 30th and 34th respectively, so the Australian kept the lead at half way into the 67th Critérium du Dauphiné. 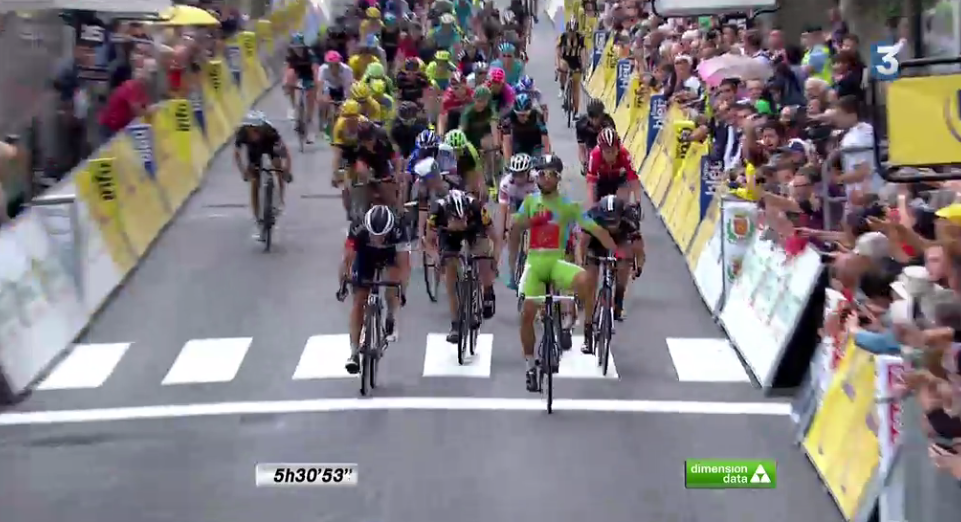