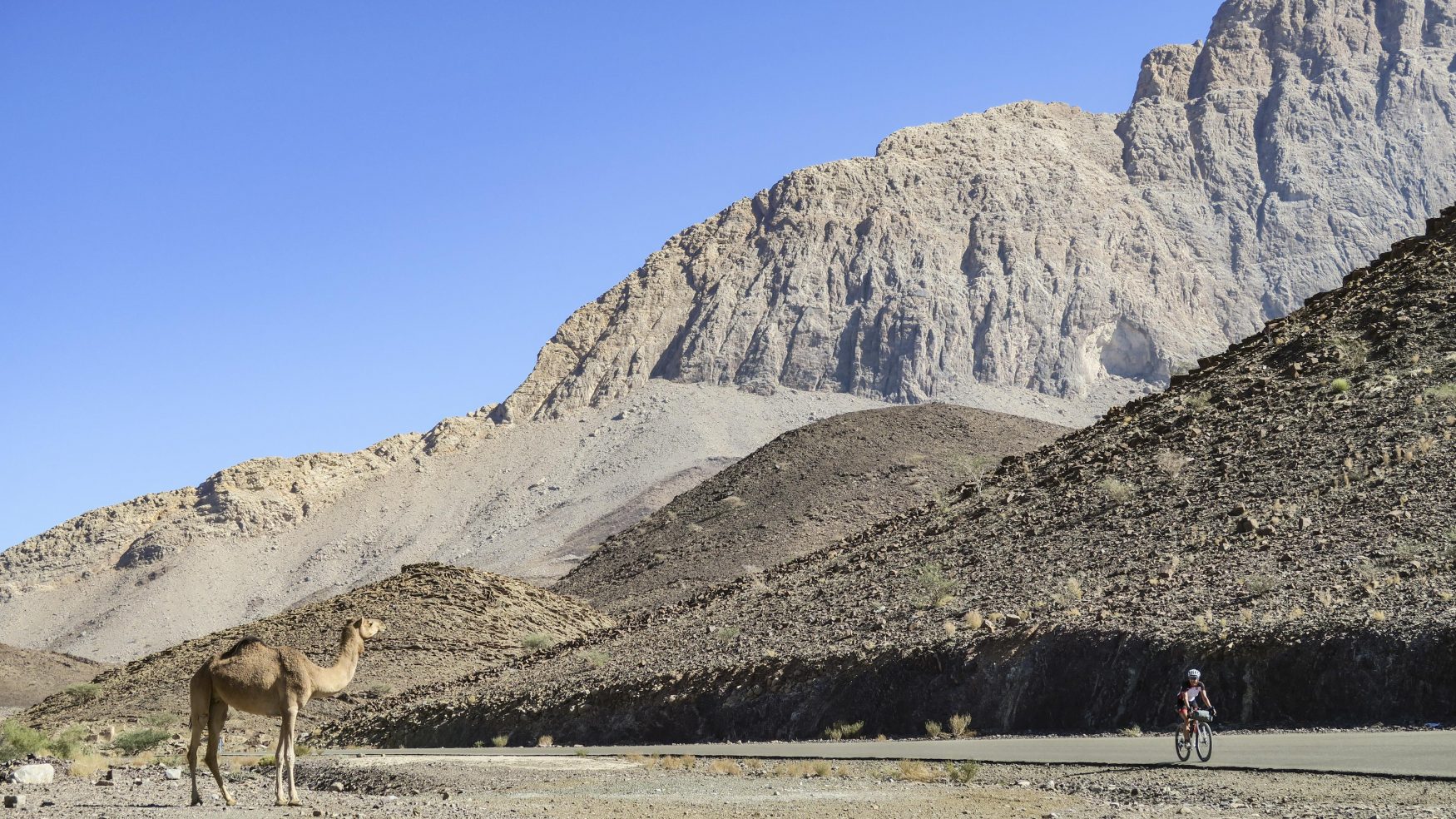 This adventure was supposed to be another girls’ trip with my trusted cycling buddy Kimi, until she injured her knee skiing. Searching for a last-minute replacement I had to field questions like:

“Will you wear a scarf? Will you cover up on the bike? Will we be allowed to share a room if we are not married? Are women allowed to drive?”Easy to persuade, my work colleague Neil was keen for a new adventure, and to snap some photos. Back on track again…

Located on the south eastern end of the Arabian Peninsula, with the United Arab Emirates, Saudi Arabia and Yemen as its neighbours, it is no surprise that the Sultanate of Oman is often overlooked as a travel destination. Put aside any preconceptions of the region, and you will find a tranquil, peaceful country, a true treasure chest of adventure, hospitality and scenery – a jewel of the Middle East. A short (6hr) direct flight from most major European cities to the capital Muscat, makes Oman the perfect winter escape.

The Al Hajar Mountains lie to the North West. Some 70km from the coast, Jebel Shams is Oman’s highest mountain, peaking at an imposing 3002m. The area is popular with Omanis in the summer months, looking to escape the brutal heat of the lowlands. Ideal conditions for cycling fall within the winter months though (Dec/Jan).

Working out the perfect 3-day trip that would allow us to travel light, while taking in the highlights and providing maximum variety, proved trickier than anticipated. Though the area features plenty of villages to fill up on water and food, accommodation is seriously limited outside the major business centres and away from the (very few) tourist hubs.

Researching route options on Google Earth exhaustively, I felt more like an astronaut than a cyclist – but after several nights of pouring over my PC, we were finally ready to embark on our 3-day adventure: “Ground control to Major Tom….take your protein pills and put your helmet on…”

Still dark, we drove to Murri, a tiny village tucked into the mountains just off Route 10 between Rustaq and Ibris, to strategically park the rental car for our return 3 days later.This was going to be our biggest day, and with somewhat unreliable estimates on just how much climbing and what terrain was to be expected, a dawn start made sure we had a buffer – which turned out to be a good call. Shortly after rolling out of Murri, the terrain changed to a narrow wadi with lots of short, sharp climbs that didn’t feature on the profile, making for slow progress. Was Google, which notoriously overstates the climbing metres, accurate after all?

As the wadi widened and the sun started peaking over the mountains, we approached a small town and a large tar road with almost no traffic, other than a few construction vehicles. Our GPS log drew a straight line over the former winding track as the road carved through the mountain side – a telling clue as to the rate of development in Oman. The country continues to invest billions of US$ into road infrastructure – and the rate at which they are going, I recommend that you visit Oman rather sooner than later, while there are still gravel roads!

En route, we passed the beehive tombs of Al Ayn, dramatically lined up atop a rocky ridge, with Jebel Misht as the backdrop. The stone structures date back to 2000-3000 BC and the whole area holds UNESCO World Heritage status.

Just when we got used to the smooth riding, making good time, my cunning Google Earth short-cut turned upwards onto a 4×4 track with a loose steep descent. Oh the irony, that Neil cut his tire on a piece of glass between all the sharp rocks – that morning we had decided that carrying a spare tire for three days would be overkill, so it had remained behind in the car. Out came the tubeless plugging kit instead, which would (with some daily re-plugging) see us through to the end of the trip.

With the light waning and the final 18km and 1300m ascent up the Jebel Shams Road ahead, we wisely declined a coffee invitation of a friendly local who was intrigued with our tire fixing efforts. Initially disappointed that the first 10km of the climb are now tarred, we soon were to thank our lucky stars – this rivals European iconic climbs like Ventoux and Alp d’Huez. If it wasn’t for the final 8km stretch of gravel, it would make for a spectacular hilltop finish at the Tour of Oman – but it’s probably just a matter of time.

After lots of grimacing and zig-zagging across the (thankfully) wide road, we eventually made it to the top just before sunset. Wanting to catch the last rays, we rode on to the closest viewing point of the Grand Canyon of Arabia – Wadi Ghul, dropping a 1000m into a stunning abyss. Also dropping dramatically were the temperatures, and by the time we finally reached our accommodation we were frozen solid. The incredibly hospitable staff at Sama Heights couldn’t believe anyone would actually cycle up this mountain. Highly impressed, they promptly upgraded our accommodation. A scrumptious buffet dinner in the cosy hotel restaurant made us feel on top of the world… oh wait, we were – at least on top of Oman.

We spent the morning exploring the magnificent view points along the rim of the canyon. The ‘balcony trail’ is popular with hikers, but don’t attempt this on a bike, with luggage, unless you are Danny MacAskill or suicidal J.

After the sun pushed temperatures back into the double digits, we claimed our reward for the previous day’s efforts – the descent towards Al Hamra. There were noises coming from our disk brakes that I’d never heard before. Neil assured me it would go away if I just braked less (huuuhh?) and that it’s normal if they run very hot. We used it as an excuse to stop for more photos.

Al Hamra is one of Oman’s oldest towns, with wonderfully green palm trees and rows of traditional mud-brick houses.  It’s also the perfect spot to refuel before tackling the next climb, from 700m altitude right back up onto the ridge to the Sharfat al Alamayn viewpoint at 2000m. The road to the top is tarred and offers a pleasant gradient, compared to the previous day’s ascent. At the top however, this all changes. Out next section of ‘road’ is graded as a 4WD route only, plummeting at some scary gradients to the traditional mountain oasis of Hatt and into Wadi Bani Awf.

Just as we began descending we met a German cyclist, walking up towards us. Encouraging him with ‘awesome, you almost made it’, he told us that he had attempted the descent, but turned around after one kilometre realising his bike wasn’t up to the task… Ever the techy, Neil just raised his eyebrows at carbon rims, calliper brakes, skinny tires and laughably inadequate gear ratios. Very un-German preparation!

Even basic research reveals grave warnings about travelling by 4×4 here: “the route passes through remote, rugged country and you should take the necessary precautions (spare tire, jack, water, warm clothing, walking shoes and basic provisions). Check weather conditions before you leave and do not attempt the journey during or after rains.” What was he thinking?!

In mountain biking I was often told ‘get your ass behind your saddle’ when descending steep sections – not that easy when carrying a saddle pack filled with gear… On the one hand, we just wanted to blast down, adrenaline pumping, white knuckles. But this section is an absolute geological wonder, awe inspiring – we felt like we were in a scene from Star Wars. Around every corner there was yet another view that made us stop (generally with a long skid) to take in this astonishing scenery. Once again we rolled into camp with only the last rays of daylight. Nestled deep into the folds of the mountains, Bait Bimah Travel Lodge offers very basic accommodation with shared bathrooms, but is immaculately clean. Settling into the cosy tea area, we reflected on another magnificent day, savouring this special and remote place, sharing stories with a handful of other travellers, hikers and climbers.

The next morning, we backtracked a few kilometres to visit Bilad Sayt – an idyllic village tucked into a side gorge. If you can (just cycle faster than us J), I recommend visiting during the afternoon – as the light should be better for photos.

The final day was meant to be easy – at least that’s what the profile suggested, so we decided to take another quick side trip to the lower entry into Snake Canyon, with its steep, towering walls. But halfway there, one look at the descent (knowing we’d have to come up again, which would probably take a good hour and involve walking) we decided it wiser to press on with our journey and re-join our route to Wadi Sahtan.

Just as well. We had underestimated the ‘little spike’ in the profile – only 2km long, but brutally steep. We pondered the road sign for Wadi Sahtan (with its variations of spelling – like many places in Oman…), as the road pointed towards heaven while putting us through hell.

Wadi Sahtan itself was everything and more that we could have hoped for. After the previous days’ desert and high mountain riding, we found ourselves in a narrow river bed with flowing water with Jebel Shams towering right above us. It seemed as if we couldn’t escape the lore of this mountain.

Popping out of the wadi, we were abruptly back in civilization, on yet another oversized tarred road (for such light traffic). However the scenery was no less spectacular. At this point, we came close to hitting the wall – figuratively as well as literally. Following the main road, we missed our usual village shops, assuring ourselves ‘there’ll be another one soon’. Also, as fast as new roads are built, new neighbourhoods spring up – massive plots and large houses dot the desert landscape and our original plotted GPS tracks often indicated a route directly through the middle of an Omani person’s brand new house, always surrounded by a big wall.

It didn’t help that during the afternoon almost everything is closed. Between 12h00-16h00 (when temperatures are around 45 degrees during summer months) there’s not a person in sight. Before we knew it we were back on lonesome gravel tracks, skirting the foot of the mountain range – the vast contrasts never ceased to amaze.

With the short daylight hours, once again we were racing the sunset back to our rental car in Murri, to get us back to Muscat for a sumptuous dinner. While guzzling down our well-earned four-course meals, we reflected on what were (and what surely will remain) three of the most remarkable days of cycling in our lives.