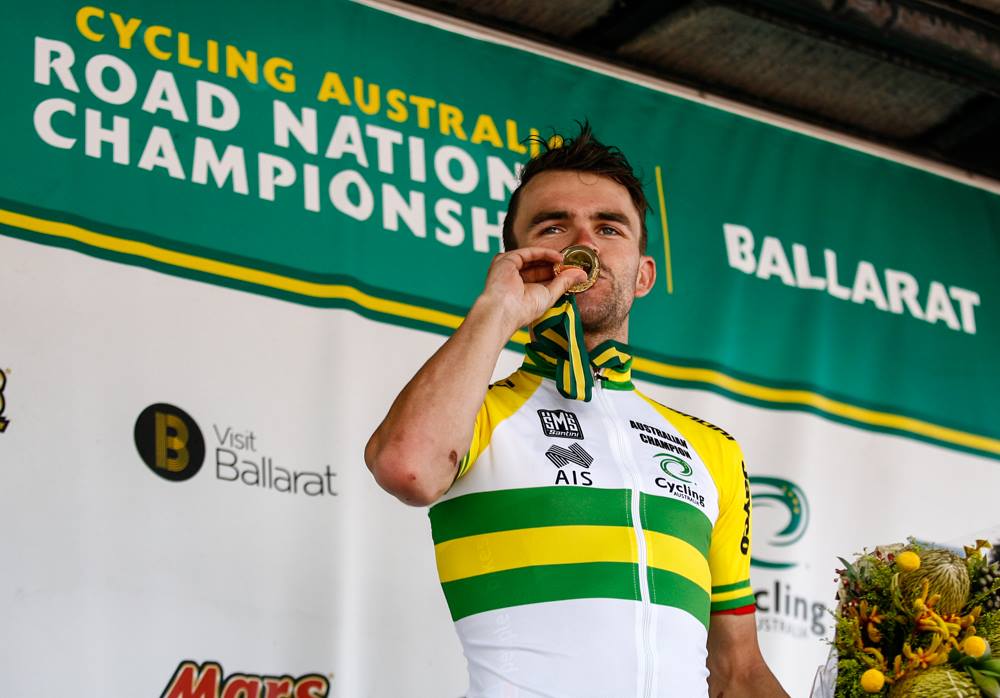 10 Jan 2016
By Campionissimo - In LATEST ARTICLES, THE GREAT RACE

Part of a strong 21-rider break that formed on the opening lap Bobridge won the hearts of the Buninyong faithful with an attack that was reminiscent of the panache shown by the great Eddy Merckx.

“That was my greatest ever ride,” said a satisfied Bobridge. “I don’t think it’s sunk in yet really but to be honest I think 90km or 100km solo is next level I guess,” said Bobridge. In saying that this is the kind of course that when you do have that nine minute advantage those guys are still climbing and you’re descending.”

The men’s race pace was on from the start with a strong 21-rider group forming on the opening lap consisting of key contenders such as Jack Bobridge (SA), Tim Roe (SA), Michael Hepburn (QLD), and Bernie Sulzberger (TAS).

In what would prove to be one of the decisive moves of the race Bobridge and Bernard Sulzberger attacked from the 21-rider break and with the duo working together they had quickly built a lead of 40 seconds, with the peloton now over eight minutes behind. As what remained of the break sensed the danger in the move of the experienced Bobridge and Bernard Sulzberger, riders set off in an attempt to bridge.

Unhappy with the pace, Bobridge made the decisive move of the race and dropped Sulzberger on the climb on the 10th lap, creating a one-minute advantage by the end of the lap.

A combination of the heat and the pressure being applied by Bobridge pushed the gap to 10 minutes with the riders that remained warned they would be pulled from the race if the gap continued to grow.

With the danger evident and Bobridge showing no signs of slowing, Orica-GreenEDGE put seven riders on the front in an attempt to keep their hope of a fourth national title alive.

As numbers in the peloton began to dwindle and riders had no team support left they set off on their own with time trial champion Rohan Dennis (SA) and former time trial and criterium champion Cameron Meyer (WA) the major animators.

Meyer and Dennis, who like Bobridge are former world champions on the track, joined forces bringing the gap down to six minutes and 25 seconds as they started the final two laps as a heavily reduced nine-rider peloton was still over eight minutes behind.

It was one of the toughest races Meyer has ever experienced. “That was one of the most torturous national titles ever, as well as it being in that sort of heat. It was a strange race, up and down.

“As soon as I heard the situation of that big group, I’m thinking ‘geez, they’re giving him a bit too much gap’. You let Jack Bobridge go out like that and It’s going to be a hard chase.”

Meyer was confident he could reel Bobridge in, but it wasn’t to be. “I was thinking that surely he’s going to blow at one point! Sometime his legs are going to give up, but I think it was only in the last lap. All our legs were gone as well. He thoroughly deserved it and I’m happy to be on the podium.”

“I’ve been fourth here twice and had a fifth (place). I was part of Jack’s win, I was part of my brothers win, Luke Durbridge’s win, Simon Gerrans win and I just wanted to get on the podium.”

“For me to get on the podium, it just shows all of the hard work I’ve done. I can go into the next races confident and have another crack.”

Heading in to the final lap the win for Jack Bobridge had well and truly been sealed with a four minute 40 second advantage on Meyer with a surging Pat Lane (VIC) and Dennis a further minute behind.

“Obviously Rohan was in fantastic condition after what he did to us the other day. I was actually going to follow either [Simon] Gerrans or Caleb [Ewan] today. In the back of my mind I thought Richie or Rohan would probably be too strong for me to try and go with them at the finish.”

“When I saw that big group go at the start, 20 guys that had a lot of teams represented, I put myself there and I guess I got away with Bernie [Sulzberger] and he was umming and ahhing whether to stay there or not. At that point in time if I was to go back I’ve spent too much energy already so I’m not going to win the bike race anyway.”

Meyer crossed the line two minutes and 52 seconds behind to claim silver, with Lane a minute further back for bronze.

It was a big day for Pat Lane who conquered World Tour riders to claim bronze. “I’m absolutely stoked. The team put a fair bit of faith in me, and confidence. I’m really happy I could get a podium result for them.”

“I’ve got a great support base and I think that rubs off. I’ve improved a lot since last year and come back to a good level.

”Everyone is getting good results and you see that and you really believe that with the support we’ve got, you can do it yourself. It’s a really good atmosphere within the team.”

Nathan Haas (ACT) claimed the sprint for fourth over one minute behind Lane in a race that saw only 15 of the 127 started complete the grueling course.

Spratt, who claimed the title in 2012, showed her speed and tactics in the closing stages of the race, jumping early and distancing Corset in the final few hundred metres to claim a second green and gold jersey.

In a three up sprint just meters behind for bronze, ORICA-AIS’ Rachel Neylan (NSW) showed her experience to climb on to the podium for the second year in a row.

“The first one was probably a little bit more unexpected, this time I came in knowing that my form was really good,” said Spratt of her second national title.

“Having Sarah Roy out there in that early break was great for us,” she explained. “It was a great situation and it meant we could not panic, sit in there and relax and certainly had the other teams wondering what we were going to do. Once we started making those moves it really meant business.

“Getting across to Sarah was great, she was cramping, she was absolutely done but she just said, “What can I do, What do I do?” she just gave me every last bit of energy she had and I knew that it was up to me to finish it off.

It was a relaxed pace from the start with the peloton remaining together for the opening two of 10 laps. The first attack came from Justine Barrow (VIC) who was able to build an advantage of 30 seconds before being absorbed by the bunch as the pace increased.

Heading in to six laps to go, New South Wales pair Sarah Roy and Louisa Lobigs formed what would be the main move of the day and quickly built up a lead of one minute. The gap gradually extended to just under three minutes at the half way point of the race and continued to hold at that level.

As the race entered the final 25 kilometers the action really kicked off, with Corset and Spratt attacking heading into the penultimate lap.

As the chasers crossed the finish line with two laps remaining the advantage of Roy and Lobigs was down to one minute and ten seconds on the two chasers, with former criterium champion Kimberley Wells bridging across, and under two minutes to the peloton.

Roy and Lobigs’ time out front under the hot sun started to take its toll, with Spratt, Corset and Wells joining them in the lead. Starting the final lap the five riders held a touch and go advantage of 42 seconds on a much-reduced peloton.

On reaching the final climb Spratt and Corset took the opportunity to distance the faster finishers and continue on solo. With the remaining riders caught a flurry of attacks set off from the peloton with three former road race medallists Katrin Garfoot, Rachel Neylan and Lauren Kitchen taking one last opportunity to go across.

With Spratt having teammates in the move behind, Corset was forced to do much of the work at the front with Spratt reluctant to contribute as the chasers closed in.

“I think we didn’t have too much communication in the final laps, once I was away. I just spoke to Sarah and told her that I was confident that I could finish it off for the team so she certainly knew that,” Spratt explained.

“I know Ruth’s actually strong sprinter so I had to be really really smart in the way I won that sprint.

“It’s just numerical advantage I knew I had Green Edge behind me if it did come back together so I could play that card a little bit but I was feeling really strong out there and I know in a really hard tough race I can actually sprint really well.”

Entering the final kilometre the visibly closing gap was down to just 16 seconds with the three frantically chasing to make it across.

Coming from second wheel Spratt opened her sprint, taking an immediate advantage and holding it to the line to claim gold.

“Ruth is quite punchy so that was my aim to make it a bit more of a drag race so I could just keep getting faster and faster and I think, getting the jump on her was what allowed me to win the sprint.”

Behind Neylan claimed the bronze medal outsprinting Katrin Garfoot (QLD) and Lauren Kitchen (NSW).
It was an emotional result for bronze medallist Neylan whose father passed away late last year.

“I’ve had to dig really deep to be able to stay away from my family and going through looking someone so close to you is such a big process in your life.

“I think someone from up above was looking out for me today. It’s been a big adjustment process but today it’s been so special. This ones for dad.”

The battle for the first ever under 23 women’s road race jersey played out in the main peloton with Jenelle Crooks (QLD) edging 2016 criterium national champion Jessica Mundy (SA) with Ellen Skerritt (QLD) rounding out the podium.