Cycling the “Dark Divide” in Search of Sasquatch 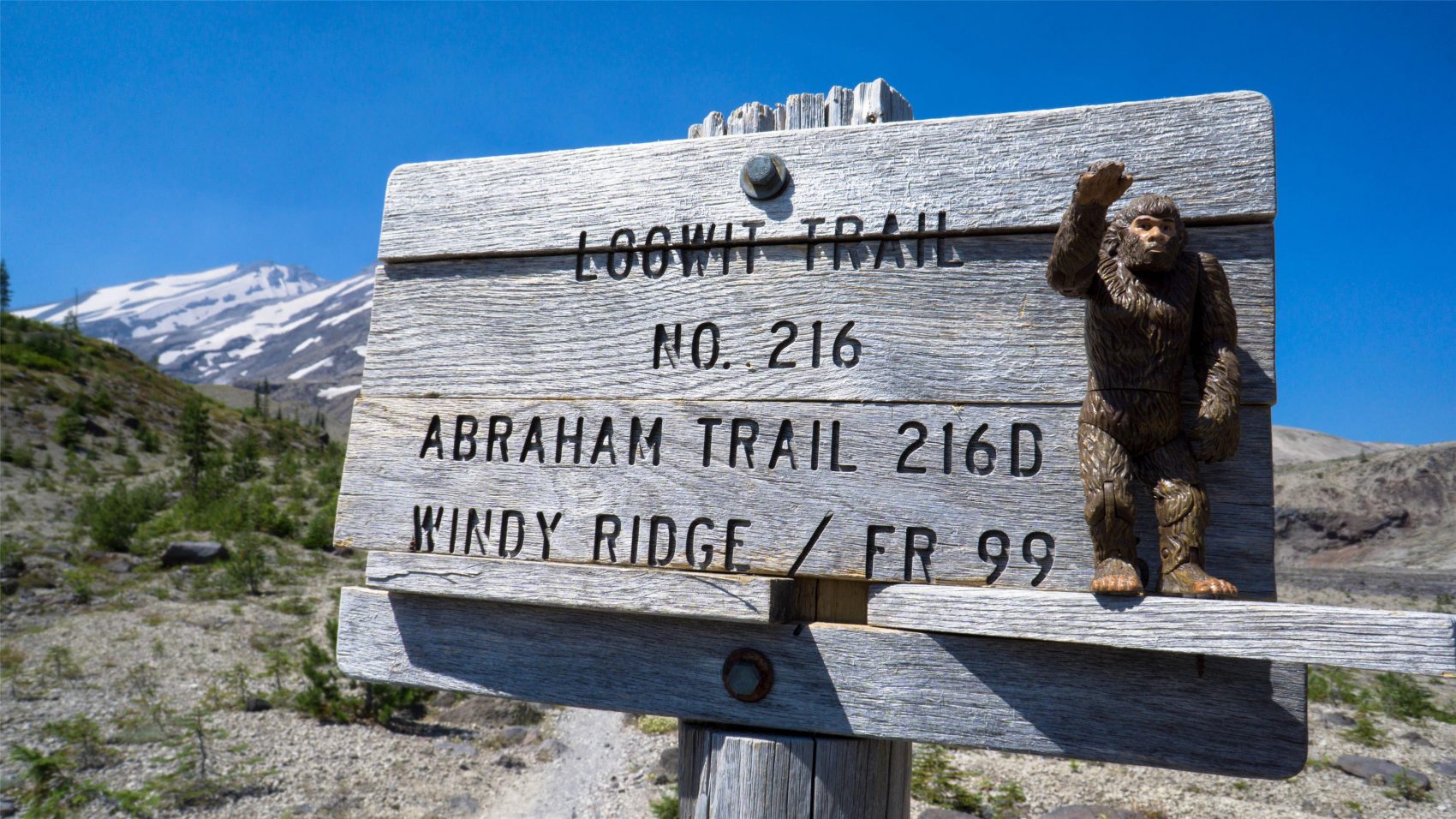 Imagine a Tolkien-like place where primordial volcanoes crumble into lush, carpeted forests. Where thick ribbons of bearded moss unfurl off ancient stands of evergreen that brawl for space in the sky. Slivers of frothy cataracts carve deep canyons, punctuated with sky hungry spires, teeming with abundant wildlife and rumored mythical creatures. Now what if I told you this place exists, and is explorable by bike. Welcome to the Dark Divide.

The Dark Divide; the region couldn’t be more properly named. An epithet after gold prospector, John Dark, the remote isosceles triangle is flanked by Rainier to the north, Adams to the east and Mount St. Helens to the west. Save for a few remote highways … the fabled canopy of old growth is quietly regarded as one of Washington’s largest roadless areas. To top it off, the region is haunted with lore, including the highest concentration of alleged Sasquatch sightings in the US.

From folklore to paranormal to cataclysmic, the region ransacks your adjectives. It’s utterly wild …  a fitting place to release your dragons. We brought our bikes into the heart of the Dark Divide to sample the best of it all. And if we found Sasquatch? So be it; we’d tell that story too.

Let’s start with Squatchin’… not unlike bikepacking, it requires a fatal attraction to the slim chance. You gotta stack the odds in your favor. And if I’ve learned nothing else while hunched over trainer, binge watching Bigfoot documentaries all winter long, it’s that pedaling into the Dark Divide shouldn’t be taken lightly. Wouldn’t be prudent. My partner (Chris Minson…a physiologist) and I (an illustrator) are men of logic and reason. Before we launched into the sticks, we took a detour down the hallowed halls of …  hang with me … science.

Just so happens Idaho has its own specialist in the matters of Sasquatch. Dr. Jeffrey Meldrum is a professor of anatomy and anthropology at Idaho State University. An expert in bipedal gait, Meldrum has a degree from Stony Brook and appointments from Duke and Northwestern. He’s one of the few academics (dare I say the only academic?) who lists cryptozoology behind his credentials. Stashed away in his office at ISU is a stack of some 200 casts of Bigfoot impressions. He’s that into Bigfoot.

Studiously working to bring credibility to the pursuit, Meldrum navigates a fine line between sceptics, crackpots and science. I figured who better to point us in the right direction to hone our Squatchin’ skills. Sniffing that we were coming at it somewhere sideways, he Heismaned my request for specifics and instead encouraged me “to adopt the role of a “citizen scientist … document and collect worthwhile data in the field…” Meldrum then sold me his Sasquatch Field Guide for $7.95 plus shipping.

Feeling sufficiently trained in mind, body and spirit, we grouped where every credible Sasquatch expedition starts; logically, in the basement of my parent’s house, ready to depart for the Dark Divide.

To understand why Sasquatch in the Dark Divide, let’s go back to the beginning  – well, the modern beginning. Mount Saint Helens has dozens of stories documenting encounters with hairy-like, wild apemen on her flanks. But none are as famous as Ape Canyon. You couldn’t make this stuff up. June of 1924, reputedly after a week of hearing shrill squeals, whelps and loud echoing knocks in the valley (and let’s be honest, probably a few bottles of whiskey), five gritty miners holed up in their backcountry log cabin found themselves under siege by described hairy “mountain devils.” Rocks were lobbed, the door was rushed, an arm even reached through a hole in the wall tussling with an axe. The men spent the restless night wagging a shotgun through the cabin wall, defending their position. As the night broke into dawn, one of the men, Fred Beck, allegedly shot and killed one of the wooly creatures, watching it fall into the canyon. The name Ape Canyon was born.

With the truck and itinerary left at the Pine Creek Information Center, we pedaled north up a hummock of forest to the Ape Canyon trailhead. A steady diet of vertical k’s on gravel-turned-loam brought us to the exposed canyon rim, where Beck fell his mountain devil. The tip of Ape Canyon clawed prophetically at the trail, and precipitously disappeared 400 feet beneath our wheels.

Ape Canyon’s topography was severely impacted by the 1980 eruption. What was once green was now stripped buck naked down to rock. Cresting the lunar ridge, the trail finally broke into sky, revealing the martian landscape of the Plains of Abraham. For a region so closely restricted (only hikers can enter the blast zone proper and only then via the designated trail … and the caveat that you’ve gotta cross the 10-mile zone in a single push — camping is prohibited in the blast zone), Mount Saint Helens yields unbelievable access for cyclists. We followed a thin ribbon of trail that evaporated across the pumice.

Skirting off the east shoulder of Saint Helens, we first rolled … then plummeted … down Windy Ridge. The trail so steep … the ground so loose … I had to belay the descent with hands on the hoods, throttling each step with a controlled slide until it spilled out onto the road below.

Unlike the hustle and bustle on south side, the Windy Ridge trailhead on the north had that eerie, ‘Walking Dead,’ sensibility to it. Being a Saturday, it should have been packed. Instead, we found the lot empty, the road cracked … weeds sprung up from ruptured asphalt. Bleached timber laid combed back over the land like matches stacked in a box. Silent … desolate … creepy.

We rolled down forest road 99 where we were eventually flagged down by a hiker at Spirit Lake. Tom Brandenburg was a geologist evaluating the road conditions. “Old man winter was tough on the us last year…” shared Brandenburg. The cataclysmic deforestation of the 1980 explosion still rendered the terrain unstable. Raw earth exposed, little has grown back to prevent mudflows from pouring over the road all winter long. “The road is closed to cars for at least another month. You should have the road to yourself!”

We gleefully carved liberal arcs, holding loose lines while descending 12 miles to Bear Meadows to catch the infamous Boundary Trail. Back in the day, the Boundary Trail was the principal route for rangers on horseback patrolling the ‘boundary’ between the then designated Rainier and Columbia National Forests. Nowadays patrolled by four-stroke motorcycles, the Boundary climbs and falls some 50+ miles across the Gifford Pinchot National Forest towards Mount Adams.

We slipped off the highway, rolling up and down the sleepy, loamy Boundary Trail as it crested and crashed over the spine of the forested ridge until we stumbled upon an abandoned hunter’s camp. We unloaded the bikes and got right to making camp. No signs of Bigfoot were found, but we enjoyed the peace and quiet with a cumulative biomass of insects that outweighed any 8-foot mountain devil this side of Saint Helens.

Ambition sometimes gets even the best of us. In our haste to make ground, we overshot our proposed trail the night before, an oversight only discovered after descending some class A B-roads. But the Dark Divide is a special place to get lost. Rather than retracing our steps to right our error, we scrubbed the maps for a silver lining and divined an exit strategy that would squeeze us through some motocross trails, more gravel and wrap with some reportedly first-class rollers along the Lewis River.

We rehydrated, snacked and then climbed out of Wright Meadow, where we stumbled into Shangri La. Miles from civilization, deep in the backcountry, a perfectly banked, single-lane, glassphalt road steadily poured out of the mountains for 10 miles. Whooping and hollering, we sliced our way down to the Lewis River.

The soft, muddy shoals of the Lewis River are known in some circles as prime Sasquatch stomping grounds. Not entirely satisfied with the good Dr. Meldrum’s advice, before we left I reached out to Finding Bigfoot analyst Cliff Barackman. Barackman is a self-described Bigfoot field researcher and footprint cast expert. Surely he could help focus our search skills. That rascal, he asked if we were riding Yeti’s and shared it would be “easier to cast bike tracks than find a Bigfoot print inside three days.”

With our time to spy Sasquatch running out, we pointed the bikes across the highway and rolled out onto the final thirteen-mile stretch: the Lewis Trail. Steep rollers steadily chipped away at our disposition, but was tempered by the mind-blowing views of the Lewis River. 12 miles in – nearly at the truck – we were lured into staying one more night by the perfect campground stocked with hand hewn benches and a stack of chopped fir, ready to burn. We kicked off the cleats, started a fire and enjoyed our final night in the haunted hallow by the river, recounting our short adventure.

Did we find Bigfoot? Not this time. But did we hear strange sounds in the bush? Did we smell foul, musky scents? Did a huge tree come crashing down in the middle of nowhere? Were we startled by burned out stumps lurking in the bush? Well …. yes, yes, yes and yes.

Driving out of Washington, the full moon flickered through the stale smoky haze hanging over the midnight desert. I flipped on the radio and to my surprise was an author chatting about his personal experiences with … of course … Bigfoot. Author Robert Michael Pyle said it best. Does Bigfoot exist? Maybe … maybe not. But isn’t it worth preserving the Dark Divide just in case? Now that’s a tough argument to counter.

HOW TO GET THERE

Find your way to Portland, Oregon, and take I-5 to Woodland Washington (exit 21). Follow the Lewis River Highway eastbound to Cougar, Washington. From Cougar, take the 503 spur east along the Yale and Swift reservoirs. The 503 turns to Forest Service road 90, the Pine Creek Information Center is just past milepost 15.

Use the Pine Creek Information center as your base. Park on the south side of the lot and let them know your plans. The center is open daily from 9-6; bathrooms are around the side.

No Northwest Forest Pass is necessary if you park outside the Monument.

The Dark Divide encompases 76,000 acres of crooked forest ridges. 60 miles of single track, 200+ of gravel … back of the baseball card stats, it bats 1000. We looped a 2+ day route from the Swift Reservoir, over Mount Saint Helens shoulder and descended via motocross routs to the east back to the car. Longer routes could be pursued.

No cabins or hotels here; this is “roughing it” country. We each brought a quilt to throw down over a small pad and slept at the million star hotel.

Down low, you can pretty much pull off the side of the road anywhere and dirtbag camp for the night. If you need space to spread and sort, a few formal accommodations are available to spread out before the ride.

May 18, 1980. I watched it from my backyard. A 5.1 magnitude earthquake fractured across the Cascades, shearing through the magma filled dome blistering off Mount Saint Helens’ north face. What followed was a hot steamy mess–the largest recorded landslide in modern history–sloughing off the north side of Mount Saint Helens and taking with it the top 1,300 feet. The sky went nuclear. Fallout followed shortly after. By the end of the dark day, over 150 square miles of forest were decimated. Not even a year later, the region was listed as a Monument.