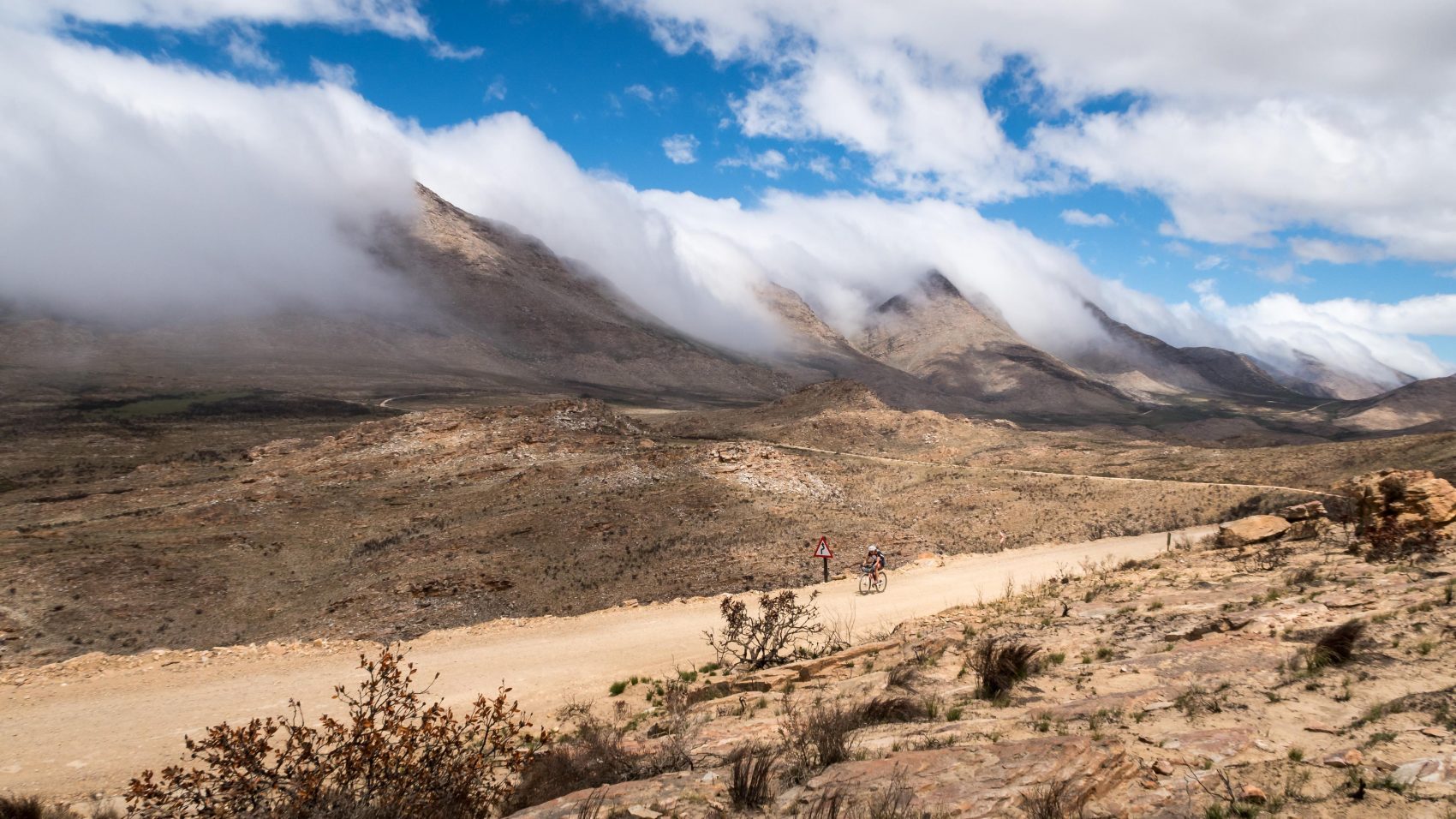 words and photography by Kati Csak

The Karoo is a semi-desert in South Africa, perfect for gravel riding. It is home to the Swartberg mountains, one the best exposed fold mountain chains in the world. Swartberg Pass, a spectacular gravel road, slices right through the magnificent geological formations, connecting the Groot Karoo in the north with the Klein Karoo in the south.

We chose the sleepy town of Prince Albert, right at the base of Swartberg Pass as the start & finish location for our circular 3-day trip. Exploring routes off the beaten path doesn’t always give you the option for luxury accommodation, so when the opportunity presents itself, take it! On this trip, we were certainly spoiled with choice, staying in quaint boutique hotels and guest houses, each with its own distinct character and excellent local cuisine.

After a good night’s rest in Prince Albert and a leisurely breakfast, we set off late morning (for SA cyclists anything after 9am is considered late. Swartberg Pass is a classic amongst motorbikers, but nevertheless, there is hardly any traffic. Opened in 1888, the pass was the last of 17 engineering masterpieces built by the famous road builder and engineer, Thomas Bain. As you ride along remind yourself that the dry-stone retaining walls supporting some of its picturesque hairpin bends, were built by hand with pickaxes, spades, sledgehammers, crowbars, wheelbarrows and gunpowder. They have lasted for over a century and in 1988 the pass was declared a national monument.

It’s about 20km to the top, climbing some 1000m to the summit at 1583 meters above sea level. The micro-climate showed off at its best, hot at the bottom, but the top covered in cold clouds.Descending the southern side, we reach the Klein Karoo, well known for its ostrich farming. The South African ostrich industry accounts for ¾ of the global ostrich market. First farmed for their feathers, they fell out of fashion in the early 1900 with the introduction of the open automobile. Since then meat production has taken over, which is popular for its low fat and cholesterol levels and accounts for more than 60% of the industry’s turnover. South Africa still sends 15 tons of ostrich feathers to Brazil each year for Carnival.

At the bottom of the pass, most people will turn left, to visit the Cango Caves and then continue to Oudtshoorn. Our trip was about exploring, so we turned right, but not without a welcome coffee break and snack at Kobus se Gat – try the roosterkoek (grilled bread with your choice of filling).The tar section that follows will help for the food to settle, before it’s back on gravel heading down Lategansvlei. If you keep your eyes open, you might spot some antelope and maybe even giraffe in the adjacent game reserves. It’s mainly downhill, with a few undulating hills. Once you cross the R62 – the main road through the Klein Karoo, it’s plain sailing to La Plume – a charming 1902 Victorian homestead. The luxurious boutique guest house is located on a working ostrich farm, combining old-world charm with modern comforts. For dinner, of course there is ostrich – ordering the fillet anything but medium-rare will make the chef cringe.

We tried for an early start, but got stuck at the generous breakfast buffet, which came in handy later as on today’s route there are no obvious refuel options until you are almost back home – MAKE SURE TO CARRY PLENTY OF WATER!!!

The gravel road runs south of the Gamkaberg Nature Reserve. Few maps show it as connecting all the way through to Rooiberg pass, but it’s all public access, despite having to go through quite a few gates.

The major ‘hurdle’ of the day is Rooiberg Pass at about the 70km mark. It’s a steady smooth climb. Descending on the other side gets a little rougher in a couple of places. For this trip riding tubeless is not a bad idea, so that you don’t have to worry about any of the large thorny bushes or catching a snake bike on the descend. Down in the valley it seemed that the universe felt at our slow pace we weren’t getting the full benefits of the aero-dynamics of the Exploro – so it sent us a blistering head wind.Rather dehydrated at this point, the last 30km felt a lot longer than they should have.

Rietfontein Ostrich Palace was the saving oasis for us – the historic buildings dating back to the feather boom years and now converted into upmarket accommodation. We headed straight for the pool – the perfect spot to relax after a hot day in the saddle, soaking up the stunning views with the Redstone Hills living up to their name. A delicious 4-course dinner is cooked by the owner herself. When in ostrich country, don’t shy away from having ostrich fillet for the second night in a row, and of course some of the local red wine with it to help rehydrate.

“Lets have an early start” once again got overruled by “lets have another coffee and a second and third helping at breakfast. After all – this was meant to be a well-balanced trip.

Back on the bike, the road winds through the Redstone Hill. Other than two short spikes, the climb back to the base of Swartberg was easier than expected, but maybe it was because we for once had a tail wind. With only 75km this was our shortest day, and you might as well look at is as being only 55km, as once you reach the top of Swartberg, it’s pretty much freewheeling all the way back to Prince Albert, interrupted only by our numerous photo stops.

Being a circular route, you can choose your start location depending where you are coming from: from Cape Town: Take the N1 north. Prince Albert is approx. 4 hours drive (393km). From George Airport: If you flying in from Johannesburg, the closest airport is George, in which case you should spend the first night at La Plume, approx. 1hr drive (77km) from George airport.

Tip: many travel guides will tell you to visit the Cango Caves or ride through Meiringspoort, but the first comes with hordes of tourists, the latter with plenty of traffic and a long section on tar. Knowing both routes, I definitely recommend riding Swartberg in both directions – it’s a highlight and offers vastly different views, especially if you enjoy going fast on the downhills and only get to soak in the scenery on the climbs.