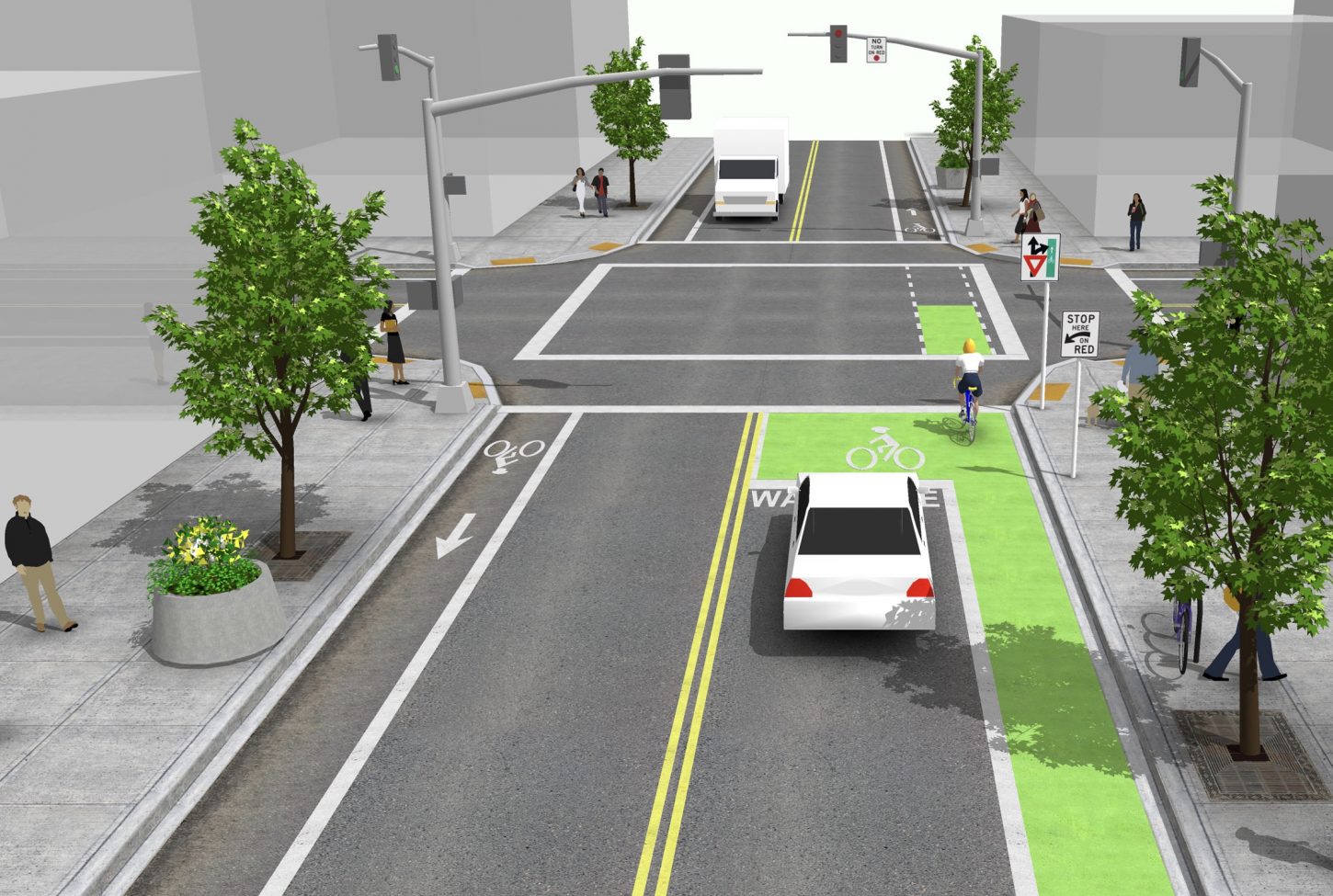 City streets and sidewalks in the United States have been engineered for decades to keep vehicle occupants and pedestrians safe. If streets include trees at all, they might be planted in small sidewalk pits, where, if constrained and with little water, they live only three to 10 years on average. Until recently, U.S. streets have also lacked cycle tracks – paths exclusively for bicycles between the road and the sidewalk, protected from cars by some type of barrier.

Today there is growing support for bicycling in many U.S. cities for both commuting and recreation. Research is also showing that urban trees provide many benefits, from absorbing air pollutants to cooling neighborhoods. As an academic who has focused on the bicycle for 37 years, I am interested in helping planners integrate cycle tracks and trees into busy streets.

In a study newly published in the journal Cities and spotlighted in a podcast from the Harvard T. H. Chan School of Public Health, I worked with colleagues from the University of Sao Paulo to learn whether pedestrians and bicyclists on five cycle tracks in the Boston area liked having trees, where they preferred the trees to be placed and whether they thought the trees provided any benefits. We found that they liked having trees, preferably between the cycle track and the street. Such additions could greatly improve street environments for all users.

Separating pedestrians and cyclists from cars

To assess views about cycle tracks and trees, we showed 836 pedestrians and bicyclists on five existing cycle tracks photomontages of the area they were using and asked them to rank whether they liked the images or not. The images included configurations such as a row of trees separating the cycle track from the street or trees in planters extending into the street between parked cars. We also asked how effectively they thought the trees a) blocked perceptions of traffic; b) lessened perceptions of pollution exposure; and c) made pedestrians and bicyclists feel cooler.

Respondents strongly preferred photomontages that included trees. The most popular options were to have trees and bushes, or just trees, between the cycle track and the street. This is different from current U.S. cycle tracks, which typically are separated from moving cars by white plastic delineator posts, low concrete islands or a row of parallel parked cars.

Though perception is not reality, respondents also stated that having trees and bushes between the cycle track and the street was the option that best blocked their view of traffic, lessened their feeling of being exposed to pollution and made them feel cooler.

Many city leaders are looking for ways to combat climate change, such as reducing the number of cars on the road. These goals should be factored into cycle track design. For example, highway engineers should ensure that cycle tracks are wide enough for bicyclists to travel with enough width to pass, including wide cargo bikes, bikes carrying children or newer three-wheeled electric bikes used by seniors.

Climate change is increasing stress on street trees, but better street design can help trees flourish. Planting trees in continuous earth strips, instead of isolated wells in the sidewalk, would enable their roots to trade nutrients, improving the trees’ chances of reaching maturity and ability to cool the street.

Drought weakens trees and makes them more likely to lose limbs or be uprooted. Street drainage systems could be redesigned to direct water to trees’ root systems. Hollow sidewalk benches could store water routed down from rooftops. If these benches had removable caps, public works departments could add antibacterial or anti-mosquito agents to the water. Gray water could also be piped to underground holding tanks to replenish water supplies for trees.

The central argument against adding cycle tracks with trees to urban streets asserts that cities need this space for parallel-parked cars. But cars do not have to be stored on the side of the road. They also can be stored vertically – for example, in garages, or stacked in mechanical racks on urban lots.

Parking garages could increase occupancy by selling deeded parking spaces to residents who live nearby. Those spaces could provide car owners with a benefit the street lacks: outlets for charging electric vehicles, which rarely are available to people who rent apartments.

Bus rapid transit proponents might suggest that the best use of street width is dedicated bus lanes, not cycle tracks or street trees. But all of these options can coexist. For example, a design could feature a sidewalk, then a cycle track, then street trees planted between the cycle track and the bus lane and in island bus stops. The trees would reduce heat island effects from the expansive hardscape of the bus lane, and bus riders would have a better view.

More urban trees could lead to more tree limbs knocking down power lines during storms. The ultimate solution to this problem could be burying power lines to protect them from high winds and ice storms. This costs money, but earlier solutions included only the conduit for the buried power lines. When digging trenches to bury power lines, a parallel trench could be dug to bury pipes that would supply water and nutrients to the trees. The trees would then grow to maturity, cooling the city and reducing the need for air conditioning.

Climate street guidelines for US cities

To steer U.S. cities toward this kind of greener streetscape, urban scholars and planning experts need to develop what I call climate street guidelines. Such standards would offer design guidance that focuses on providing physiological and psychological benefits to all street users.

Developers in the United States have been coaxed into green thinking through tax credits, expedited review and permitting, design/height bonuses, fee reductions and waivers, revolving loan funds and the U.S. Green Building Council’s Leadership in Energy and Environmental Design rating system. It is time to put equal effort into designing green streets for bicyclists, pedestrians, bus riders and residents who live on transit routes, as well as for drivers.