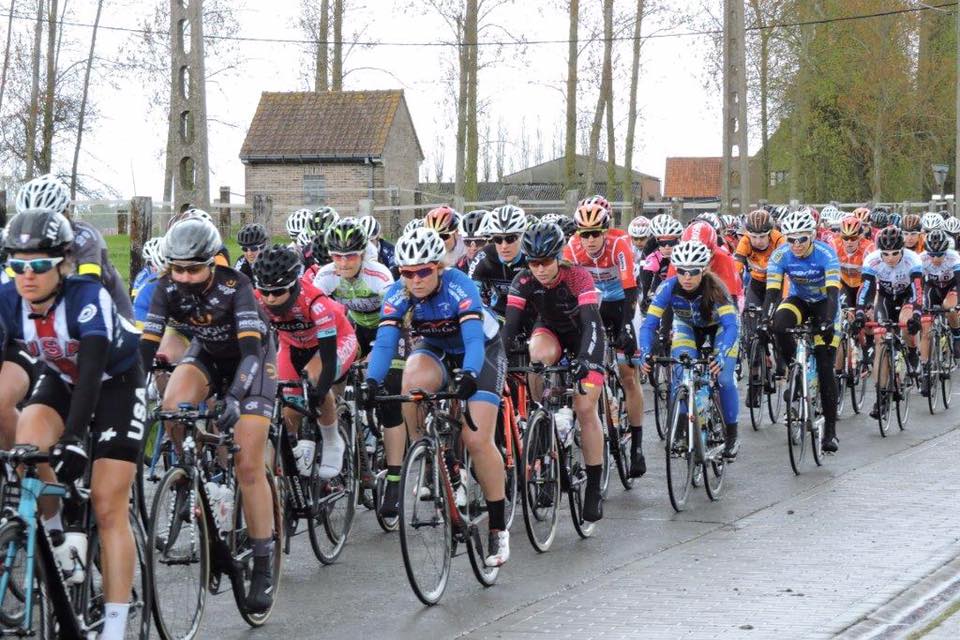 Christine Majerus (Boels-Dolmans) took a hard-fought win at the Dwars door de Westhoek on Sunday in Belgium. The Luxembourg champion won the 127km race ahead of Elena Cecchini (Canyon-SRAM) and Emma Johansson (Wiggle High5). Former world champion Marianne Vos crashed in the finale but recovered to finish 16 seconds down in Majerus in ninth place.

Majerus parlayed her tactical smarts and strong legs into her first road victory of the season, after claiming today’s Dwars door de Westhoek.

The Luxembourg champion – on the road, against the clock and in cyclocross – beat a group of nine in a technical sprint finish to deliver the team’s 15th road win of the season.

“I like working for my teammates,” said Majerus. “Realistically, I don’t have the chance to win Tour of Flanders right now. I could do a top 15, maybe a top 10, but that doesn’t bring the team much. I don’t think about it as working for a teammate or not working for a teammate. It’s just my job, and I do it. It works well. We’ve been winning a lot, and that brings me a lot of satisfaction.”

“Of course, you don’t train only to work,” Majerus added. “I’m happy that the few times I’ve gotten my chance this year, I can grab it. I have done that now three times, and every time I’ve finished on the podium – and today I won. I think it’s a good feeling for the team to know that if they give me a chance, I can use it well.”

Boels-Dolmans Cycling Team’s dominant spring has often come as a result of a numerical advantage. The Dutch-registered squad is regularly well-represented in the front group and knows how to turn its strength in numbers into victory.

“It was up to Rabobank during the race because they had the strongest team there,” Majerus explained. “They made the first split after 30 minutes or so. It was a huge group with around 30 riders. We had three – Demi [de Jong], Karol-Ann [Canuel] and me.”

Rabo-Liv continued to push the pace as the kilometers ticked down.

“There were three laps with a hill, so three times we raced up the hill,” noted Majerus. “Each time they tried to make it hard and split it over the hill. The last time we went on the hill it kind of worked. There were only 20 of us left.”

“Unfortunately Karol-Ann had a puncture just at the bottom of the climb,” Majerus added. “It was really the worst moment to have a puncture. For sure, she would have been there at the end otherwise, but the pace was high and it was too hard to come back.”

A front group of 20 riders, including Majerus and de Jong, set off for two times round the local circuit.

“Even before we came to the local lap, Rabo started to attack,” said Majerus. “At first we followed. We were two, and they were five. We were clearly outnumbered. I knew if they kept going like that, we would be in trouble because it’s not possible to follow everything.”

It became clear that the duo would need to place offense.

“The best thing to do at that point was to attack them,” Majerus explained. “Instead of five of them, maybe you’re with three of them, and that’s better.”

Majerus went on the attack in the first local lap and got into a break that included Rabo-Liv’s Kasia Niewiadom and Pauline-Ferrand Prevot. The Rabo-Live pair refused to work, which doomed any chance of cooperation in the group.

“They had Anna [van der Breggen] and Vos behind,” said Majerus. “That’s why they didn’t want to ride. I kept riding because I wanted to force Rabo to work from behind.”

De Jong countered the inevitable catch, and then Majerus struck again. A group of nine took shape. Both De Jong and Majerus had made the selection.

“We started working straightaway,” said Majerus. “Rabo had Marianne and Anna. We gained a little time gap on the main field.”

Majerus braced herself for late race attack. As expected, Van der Breggen and Vos both attempted to escape. Majerus was able to cover both moves.

“It came down to a sprint,” said Majerus. “It was a dangerous finish on cobblestone. It’s never easy to sprint on cobblestones. Marianne made a bit of a mistake in the sprint, and I was following her. Before she crashed, I could already see it coming. My bike was going from right to the left, and it was hard to stay in control. It was safer to move across the road.”

Majerus shifted across the road as Vos made contact with a barrier and hit the ground. Outsprinting Elena Cecchini (CANYON//SRAM) and Emma Johansson (Wiggle High5), Majerus was first across the line.

“It’s a shit way to win today, but I have to say, I’m seriously happy about the victory,” said Mejerus. “I felt strong today. We made the decisive move. We were outnumbered, but we still found our way.”

“I feel sorry for Marianne that she crashed, but I cannot change it,” Majerus added. “I’m happy she’s ok. Sometimes for winning you need to do no mistakes, and unfortunately for Vos, she made a mistake and I didn’t. It’s all part of the game.”