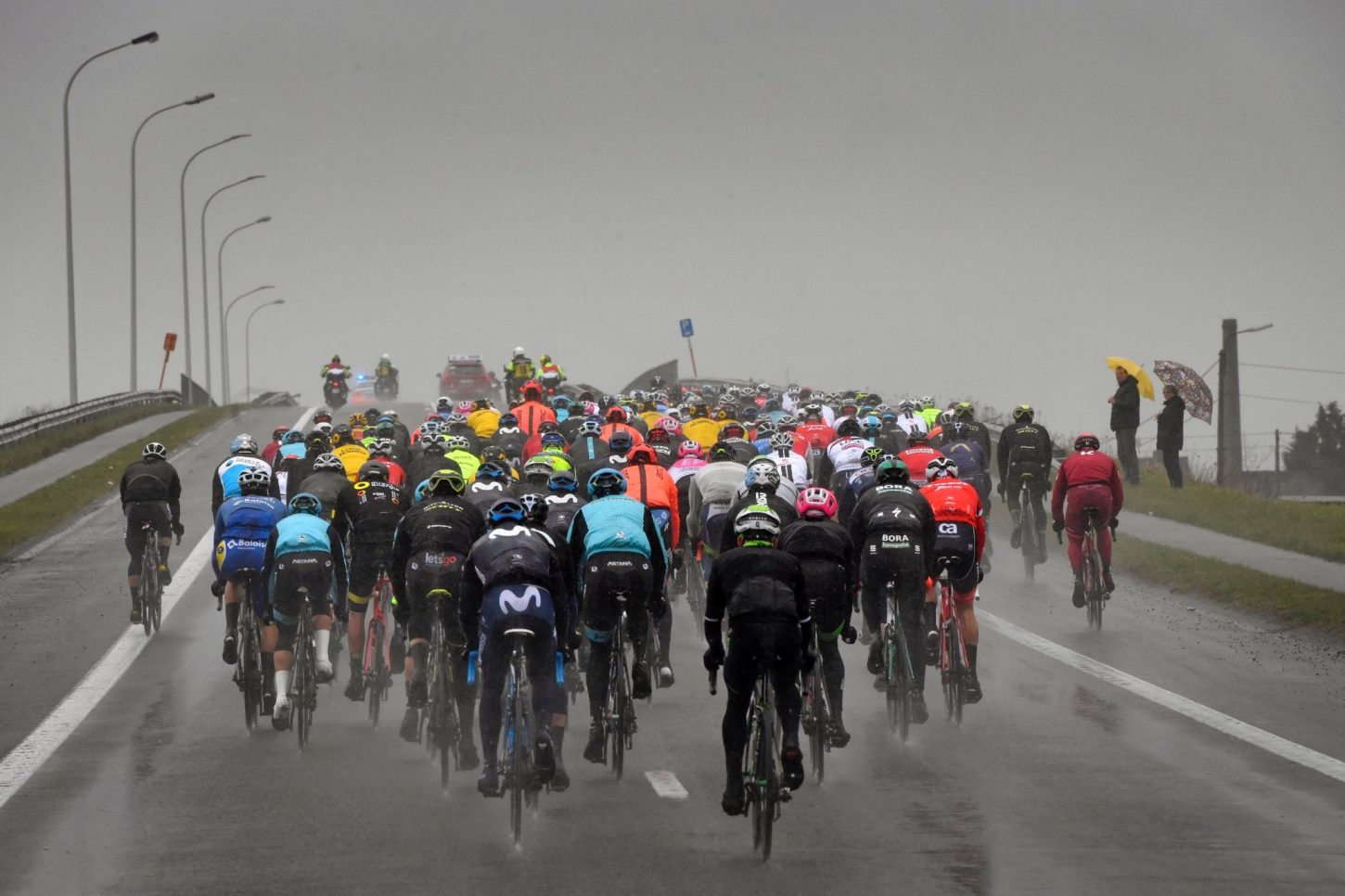 Lampaert was initially part of a small five-rider breakaway group that succeeded in escaping during the final 25 kilometers, before launching his winning move inside the final kilometer that proved insurmountable for his former breakaway companions to close down.

Indeed, just as the race was shaping up for a frenetic conclusion, Lampaert caught his rivals off-guard during the waning moments of today’s race, quickly opening up a sizable advantage as the chase failed to organize.

As a result, Lampaert could afford to sit up and celebrate crossing the finish, while Mike Teunissen (Team Sunweb) won the sprint for second pace ahead of Sep Vanmarcke (EF Education First-Drapac p/b Cannondale).

There were a flurry of attacks during the first two hours of racing that failed to produce a result.

However, with 90 kilometers to go, Luke Rowe (Team Sky) succeeded in riding clear along the climb of the Knokteberg, subsequently opening up a substantial gap of around 45 seconds.

From there, Rowe continued to extend his lead until the next ascent of the Kluisberg, where Astana took to the front and halved the Welsh rider’s advantage, later reeling him in over the top of the climb.

The peloton proceeded to remain en masse over the Knokteberg until the next climb of the Kortekeer, where Tony Martin (Katusha-Alpecin) broke clear for the next 5 kilometers before being caught during the approach of the Taaienberg.

Next came an attack from Quick-Step Floors’ Zdenek Stybar, while Greg Van Avermaet (BMC Racing) tried to follow the Czech rider to no avail.

Stybar quickly opened a 15-second gap, but the chasing group was a strong one and he was quickly caught by the combined efforts of a number of riders including Alejandro Valverde (Movistar), Luke Durbridge (Mitchleton-Scott) and Van Avermaet.

Between the top of the Taaienberg and the final ascent of the Kruisberg, the lead group had swelled to 30 riders, before Valverde and a group of 11 managed to ride clear.

While the group continued to work well together, a determined peloton under the auspices LottoNL-Jumbo succeeded in reducing their advantage to a mere 10 seconds.

It wasn’t long before the catch was made along the climb of the Knokteberg, where Benoot launched another attack to pull clear with Van Avermaet locked in his wheel.

From there, the duo opened up slight gap of around 10 seconds by the top of the climb, but again the gap was slowly reduced by the chase to where the two Belgian riders were eventually swept up on the Varentstraat section of cobbles with 25 kilometers to go.

Not long after, Vanmarcke went on the attack, powering his way across the cobbles with only Lampaert was able to follow at first before Mads Pedersen (Trek-Segafredo), Teunissen and finally Edvald Boasson Hagen (Dimension Data) made contact.

With Quick-Step monitoring the chase group, the quintet quickly built up a lead of over 40 seconds, as Van Avermaet tried in vain to mount a counter attack.

Sensing a lack of cohesiveness in the chase, Vanmarcke was the first to begin hostilities with a stinging attack during the final 5 kilometers. However, Lampaert was again keen to match his rival’s bold move, while the others quickly reacted as well.

Pedersen was the next to surge off the front, but his aggressions were quickly neutralized with just over 1,000 meters to go.

A momentary pause in the group prompted Lampaert to go on the attack with 850 meters remaining, which proved to be a winning move for the Belgian rider.