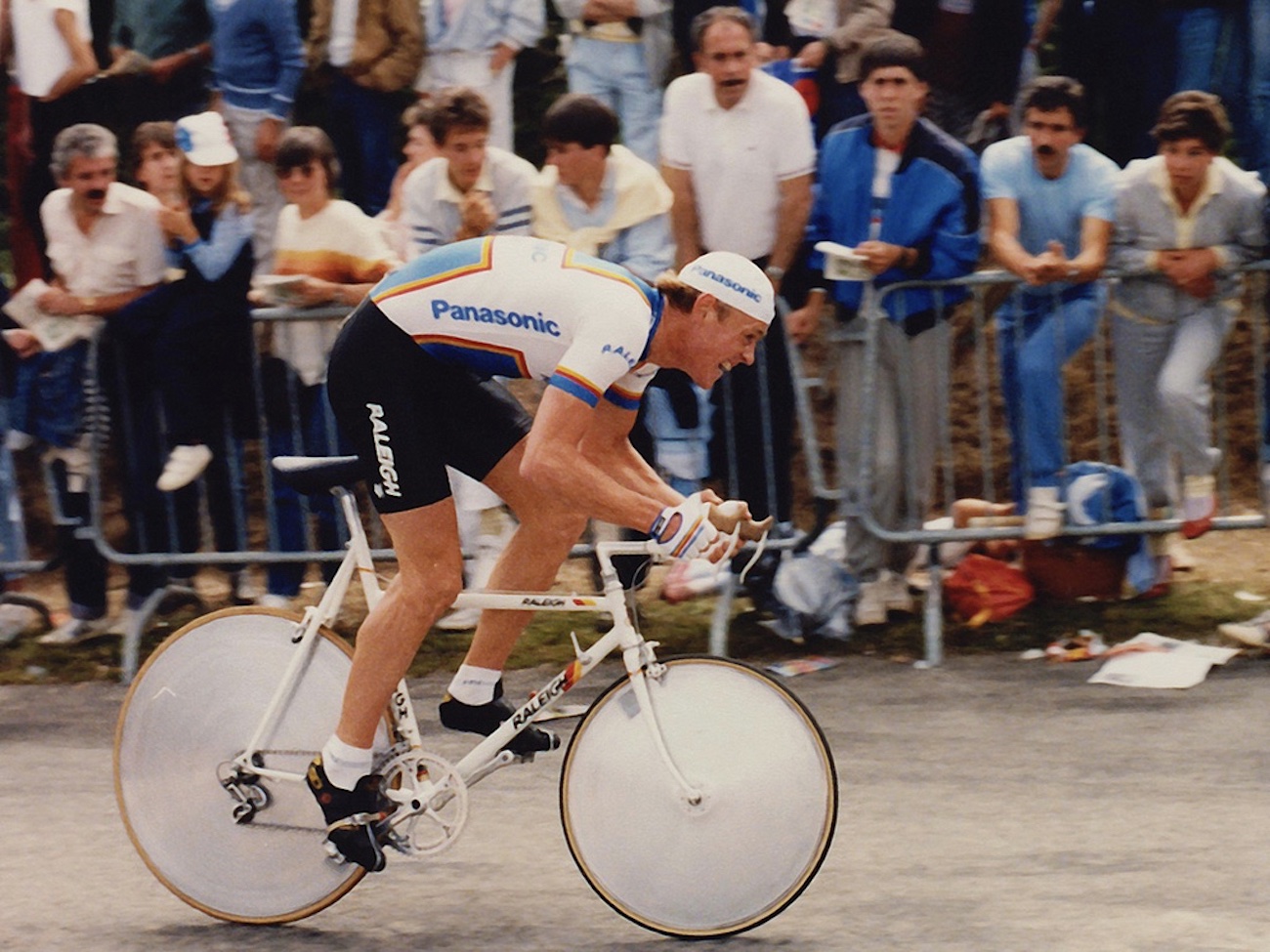 Happy birthday to Eric Vanderaerden, who was born on February 11, 1962 in Lummen, Belgium.

The Belgian rider is best known for his time-trialing and sprinting prowess in the Grand Tours, as well as his skills in the Monuments, winning the prologues in both the Vuelta a España and the Tour de France during his debut year in 1983, along with triumphs in the Tour of Flanders and Gent-Wevelgem in 1985 and the famed Paris–Roubaix Classic two years later.

It was during that year’s northern French Classic that a bitter rivalry with Sean Kelly unfolded, one that would last for years.

Cycling blogger Graham Healy recounts some of the acrimony that existed between the two riders.

One of the greatest sprint rivalries of the 1980s was that between Sean Kelly and Eric Vanderaerden which would see the pair clash numerous times during the decade.

Their rivalry first came to prominence in 1983. Early on in the season, 21 year-old Vanderaerden had clashed with Kelly causing the Irishman to crash at Paris-Nice. A few months later at the Tour de France where Vanderaerden was making his debut, he got himself in more trouble. On the third stage to Roubaix, he was involved in another crash which resulted in the French champion Marc Gomez being sent to hospital.

Kelly said of Vanderaerden afterwards in Winning magazine: “This guy does not show any respect for his fellow riders and so far is getting away with it. But he will only survive doing what he is doing for so long, he will get an answer soon. Something or somebody which makes him respect others.”

“I was very fortunate in Roubaix for I was just one place ahead of him when he caused that crash. If I had been one place behind him it might have been me and not Gomez in hospital. Others came down in that crash but fortunately escaped injury.”

Kelly was then asked what his reaction would have been if it had been him who had been brought down. “I know what I would have done. I would have got up and gone over to him and I would have broken something, probably his nose. I would not have hesitated for one second, he has got away with too much already and after Paris-Nice I would have had no option.”

“Of course I would have been up before the race officials for fighting but as it would have been a first offence I would have got away with a fine and a caution. Somebody must show this rider that there are certain things he cannot do and somebody will. It may not be one of the riders he brings down but somebody else who has decided that his messing can go on no longer.”

Two years later, the pair would cross swords again at the Tour de France. On the sixth stage to Reims, Vanderaerden crossed the line first ahead of Kelly, but both were later relegated for dangerous riding, and victory was awarded to the French rider, Francis Castaing. Kelly said afterwards, “Vanderaerden gave me a switch 300 meters before the line. He was taking me towards the barriers, so I pushed him off.”

Kelly sat up with a raised arm in protest and finished in fourth. Both had taken their hands off their bars and appeared to be punching each other as they switched across the road in the finishing straight. The photographer Graham Watson said about the finish, “Such was their speed, even with one hand on the bars, that they finished more than a length ahead of Castaing.”

Kelly said, “It’s not worth protesting about Vanderaerden because I would not get the victory.” Meanwhile the stage winner Castaing said, “This isn’t cycling, it’s war. Some riders will stop at nothing.”

The following evening Kelly reflected on the disqualification at his team hotel, and he was quite pragmatic about the incident, “Our contracts are based on the publicity we get, a finish like that and a disqualification generate more publicity than winning a race. There is no sense in getting too upset about it.”

It wasn’t only at the Tour de France where the pair were fierce rivals. They would also fight for the wins at classics like the Tour of Flanders, Paris-Roubaix and Milan-San Remo during that period.

In Grand Tour events, Vanderaerden had a strong showing during his debut Tour de France, beating the legendary Bernard Hinault in a time trial stage.

After 1988 however, Vanderaerden’s career began to decline rapidly, wherein he failed to win a major race save for the Three Days of De Panne (which he won on three occasions) and some random stage victories in the Tirreno-Adriatico, Etoile de Bessèges and the Vuelta a España.

In the meantime, Vanderaerden suffered a lot of near-misses in such high profile races as Scheldeprijs, Le Samyn, Milan–San Remo, Omloop Het Volk, E3 Prijs Vlaandere and Gent–Wevelgem where he managed to finish second or third on the podium.

Many critics viewed Vanderaerden’s waning performance as the result of the high expectations the Belgian public had placed on him as a hopeful successor to their luminary champion – Eddy Merckx.

Vanderaerden retired from competition in 1996 after that season’s Scheldeprijs, where he finished third.

During the ensuing years, Vanderaerden led a few semi-professional racing teams and also became the assistant-manager of the Belgo-Italian pro team.

He later became the directeur sportif of the DFL-Cyclingnews-Litespeed team in 2006, with his son Michael Vanderaerden joining the squad in 2007 before it was disbanded in 2009.

Every so often he can be spotted at the start of one of the Spring Classics, where he’s treated as a race dignitary.