Eurobike Outlines Trends That Will Shape the Show’s Future 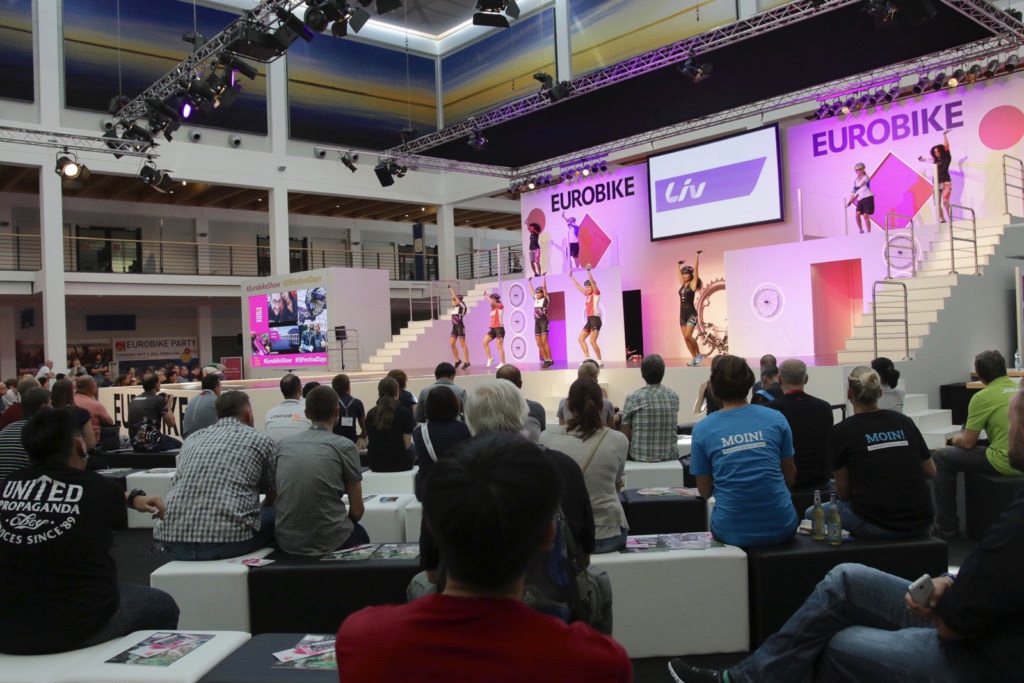 02 May 2017
By Gianni Pericolo - In FEATURED ARTICLES, LATEST ARTICLES, VELOPATHIC

The world’s leading trade shows stand out because they envision and anticipate developments in a given industry. For over 25 years, the Eurobike has been a barometer of trends, the showplace for innovation and a seismograph of the cycling world of tomorrow. Since 1991, from the early development of the mountain bike segment to mobility 4.0 solutions, the Eurobike has been presenting the products, themes and market changes that shape the future of the industry.

Digitalization, connectivity, urbanization, environmentalism, health and mobility are the societal megatrends of the future and their influence on the bike industry is correspondingly large. “Twenty years ago, at the Eurobike you could see where the development of the mountain bike was heading; in the last decade, you could see the potential that the electrified bicycle held. The Eurobike 2017 is where the next phase of the highly dynamic global bicycle market will be launched,” says Klaus Wellmann, CEO of Messe Friedrichshafen. Eurobike head Stefan Reisinger adds: “Long-established manufacturers are losing relevance and at the same time new players are forcing their way into the market, a market whose dynamism is increasingly being unleashed around products and services related to e-mobility. New and strong players are getting into the game, especially in the areas of drive systems, energy supplies and connectivity. At the same time, digitalization is bringing about changes in consumer behavior with virtually unlimited information possibilities and 24/7 availability. Traditional bicycles are losing market share, whether we like it or not, and the future belongs above all to e-bikes. This shift away from pure racing and competition bikes toward e-performance and mobility bikes offers all market actors – no matter whether they are OEM or component manufacturers, bicycle brands, importers or specialty retailers – great opportunities as well as risk.”

The world has changed since the Eurobike opened its doors for the first time over 25 years ago. The Eurobike is the yardstick that measures the speed at which the bicycle market is changing – 20 years ago, hardly any trekking bike manufacturers were spotted at the Eurobike, 10 years ago the first e-bikes at Lake Constance were viewed with gentle bemusement and today the industry is talking about why brand x or y is no (longer) exhibiting in Friedrichshafen. The Internet, which at most was known among scientific circles when the Eurobike first premiered, is now decisively shaping the way and manner in which people communicate and conduct business. The market structures of the bicycle industry have also changed in many ways since then. At the first Eurobike in 1991, bicycles were primarily sports and leisure equipment. In the last 10 years – emanating from the Eurobike – the resounding success of e-bikes and pedelecs have led to rapid developments in the bicycle market. The popularity of mountain bikes, racing bikes and so on may remain unbroken, but for some time now the bicycle has become a form of transportation whose contribution to solving traffic and climate problems is recognized and supported by policymakers and society. The triumphant advance of e-bike technology as also made a contribution to that – the bicycle has now become a vehicle.

At the same time, market structures have changed. The bicycle market is still characterized by a very fragmented landscape of suppliers and dealers and in Germany, brick-and-mortar retailers’ share of overall sales remains at a very high, unchanged level. However, a closer look reveals that among the bike manufacturers of today, there are significantly more internationally structured companies than before. A process of concentration has taken place in bike retail as well, especially since the turn of the century. At the same time, the typical bike retailer in Germany generates significantly higher revenues over a larger sales floor area than ten or twenty-five years ago.

These developments have brought with them a change in the market environment for the Eurobike industry trade show. In the estimations of many market players, the Eurobike, as the industry’s most important international event, continues to be highly relevant for the bicycle market. But the roles and functions of the show have become more diverse against the background of the changes in the bike market. The earlier, easy to understand set of relationships at an industry trade show, which could be simply described as “exhibitors meet retailers and media,” has become markedly more complex.

The Hamburg-based bike manufacturer Stevens has been an exhibitor at the Eurobike since the beginning. Volker Dohrmann, who is responsible for product and brand management at Stevens, has lived through the changes at the show. “Everything at the show is bigger, more complex, more professional, more mature, more styled. But the relationships to new groups of people and communicators have also deepened and become more differentiated. Industry associations, politicians, new media, web and real time reporting, new classes of vehicles with motors and a growing dependence of the industry on this exceptionally positive electro-trend are enriching the scene. There are new target groups and an evolved, more mature image of the bicycle.”

On the other hand, Robert Bosch GmbH is a relatively new supplier on the bike market and with its e-bike drives has already risen to establish itself as the market leader in this segment since it entered the market in 2010. Even without a decades old tradition as a Eurobike exhibitor, those in the e-bike division of the electronics concern are well aware of the value of the industry trade show at Lake Constance. “For Bosch eBike Systems, the Eurobike remains the most important industry meeting of the year and is an ideal platform to draw attention to product innovations. For us, personal contacts, networking and cultivating relationships with our regular customers are paramount. To live up to these demands, the Eurobike must also continue to actively exchange views with the main players in the industry and take specific needs into account. We are convinced that, in this way, the Eurobike will continue to retain its position as the bicycle industry’s leading international trade show,” says Tamara Winograd, who directs marketing and communications at the company’s e-bike division.

One point that often takes center stage in discussions with market actors about the future and role of trade shows in general, and the Eurobike specifically, is the placing of orders by dealers at trade shows. There is a reason why this point is often the subject of controversial debate, especially with exhibitors – after all, a full order book after three or four days of a show is the simplest and fastest kind of cost-benefit analysis for exhibitors.

But today, for a bike retailer to make important decisions about what selection they will offer directly at a Eurobike stand is more the exception than the rule. On the one hand, that may have something to do with the industry’s altered order cycles, but especially it is because of the financial implications that purchasing now has in many bike stores. Retailers whose annual order volumes reach seven figures do not make the corresponding purchasing decisions without carefully planning their range.

Nevertheless, industry trade shows continue to be very important as far as purchasing decisions by bike retailers are concerned. At least that’s what Dirk Sexauer, executive director is responsible for marketing, among other things, at the industry association VSF, says: “The ordering practices of retailers at trade shows are very diverse, but trade show visits continue to play a very large role in purchasing decisions. For retailers, participation in industry trade shows is the best way to get a feel for trends in the market and to determine whether the brands currently in their range are still competitive.”

Hans Holzinger, Managing Director for Germany at bike supplier Scott, has a very similar view: “For us, the Eurobike was actually never a trade show at which direct orders were paramount. Instead, it was much more about showing our existing and potential customers how we understand ourselves as a brand.” Especially against the background of an increasingly digital world, trade shows are becoming even more relevant, in the view of the Scott manager. “The new forms of communication make a lot of things in business easier. But I believe that the more digital communications become, the more important it is that there are places where the industry really comes together. For us, that place is very clearly the Eurobike. This is where we meet all of the players in the market who are important to us.” Against this background, Holzinger considers the decision of some market actors to no longer participate in trade shows as exhibitors and instead to focus on their own in-house shows and events to be “short sighted.”

The future of the leading trade show

“In a dynamic market like the bicycle industry, relevance as the industry’s leading event is not a status that you can sit back and take for granted,” says Stefan Reisinger, who is the head of the business area at Messe Friedrichshafen responsible for the Eurobike, as well as other events. Throughout the history of the Eurobike, an important success factor was the fact that some at Messe Friedrichshafen have always had their finger on the pulse of the market and market participants’ needs. The decision of Messe Friedrichshafen to hold the Eurobike as a pure B2B trade show starting in 2018 must be seen in this light. “That was a decision that we didn’t make lightly,” Reisinger explains.

It was only natural that the new Eurobike concept has not just been met with agreement. The interests and perspectives of the various manufacturers, brands, retailers and media are too different, as are the perspectives of actors from different geographic regions or with business operations of starkly different sizes. Previous evolutions of the Eurobike, such as from a pure mountain biking event to a business trade show, or more recently the focus on e-bikes, were often hotly debated in the industry but today, looking back, are regarded as correct, farsighted and pioneering. The fact that digitalization and the changes in information behavior that go along with it are also not sparing the bicycle industry, and the fact that the Eurobike is in a constant competition for “relevance”, reinforce the necessity of a strategic evolution.

Volker Dohrmann from Stevens agrees with that assessment: “The fundamental change can be seen in the current way in which the show is embedded in the information landscape. In the past, the Eurobike had something of a monopoly in this regard – you came to Lake Constance to see the latest innovations. Today, the Eurobike is in competition with manufacturer previews and in-house trade shows. Everything is earlier, faster, more active, more communicative. Thus, it is logical to stage the show in July, so as to develop a lead again. Certainly, this step ahead and the elimination of the pubic days are not without risk for the Eurobike. But with the earlier date, the show is giving suppliers back part of the purpose of the early Eurobike: the first public presentation of the new collection and the related exchange of views with retail partners about planning for the season.”