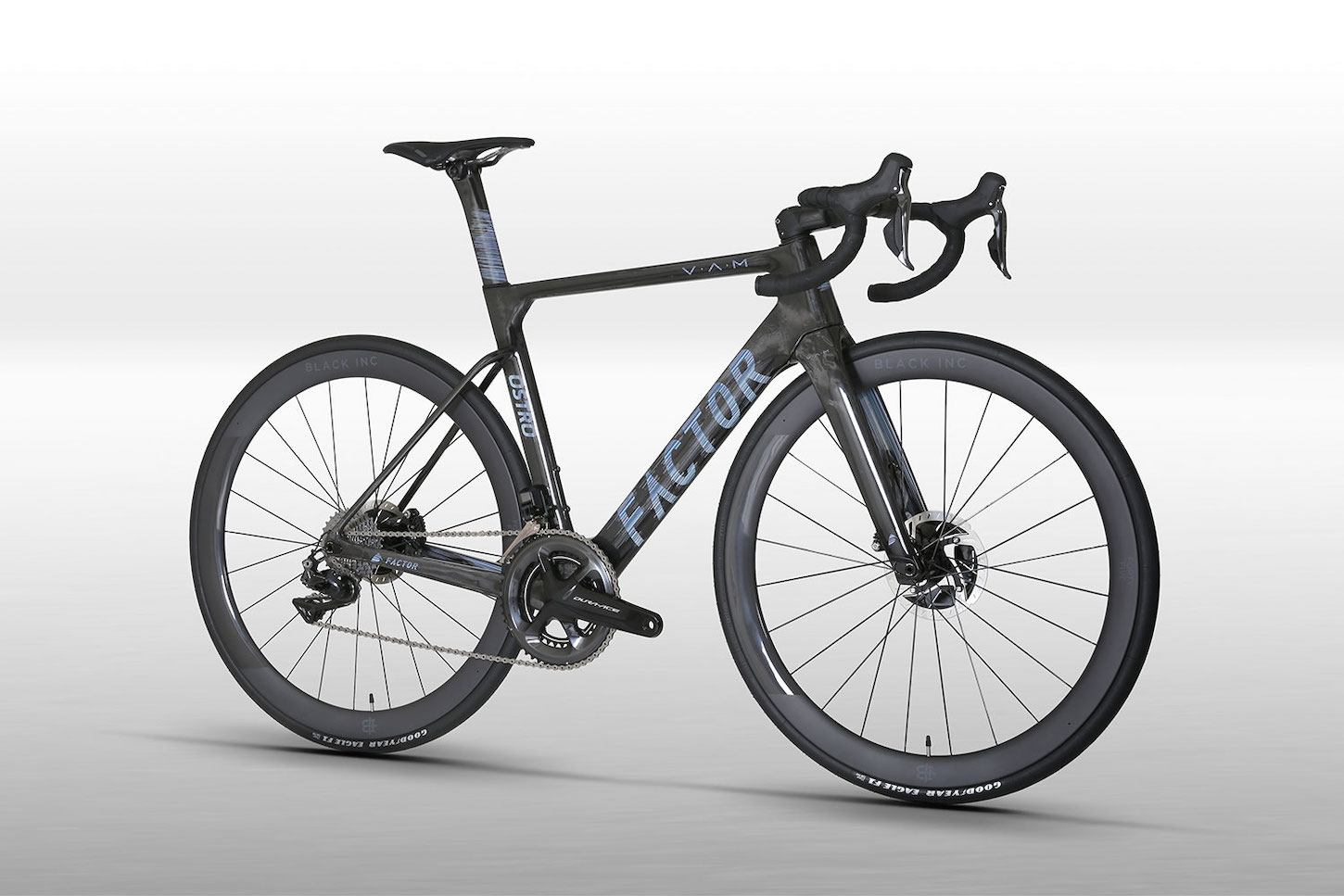 Factor has debuted its latest road bike called the Ostro, which blends the British brand’s 02 and ONE models to create an all-in-one bike that’s as much at home in the mountains as it is in the Classics.

“The Ostro concept was born from my long experience working with pro teams and riders, especially at Paris-Roubaix,” said Factor’s Director of Engineering Graham Shrive.

“Every year there would be a couple of riders who wanted to use their aero bikes to get that advantage, no matter how poorly suited they were to the cobbles. Plus, of course, pros have always wanted an aero bike with no weight penalty, or a super light bike with no drag penalty in the valleys, as the climbers might see it. Instead of battling to get them on a bike made for the cobbles, we decided to build them what they wanted, and it turns out to be a hell of a bike.”

Relying heavily on NACA (National Advisory Committee for Aeronautics) research, Factor says every element of the Ostro is optimized for aerodynamic efficiency such as tube shapes and profiles that are horizontally oriented in line with airflow, as well as truncated trailing edges that are squared-off rather than tapered.

“The critical element to the performance of a truncated airfoil is the tight radius at the transition or cut point, but this is challenging to manufacture in carbon fiber,” says Factor. “Owning our factory allows Factor to use a more expensive and time-consuming process to achieve the optimum shape without passing on that cost to consumers.”

“In designing the Ostro, Factor considered every aspect of the frame and applied the optimum aero profile, with particular regard to the transitions between frame sections (eg down tube to seat tube, fork and head tube to down tube) and to performance across a full range of effective wind angles,” adds Factor.

Additionally, the Ostro’s fork features “Reversing Flow Energizing Channel”, which Factor describes as “both the channel and the fork’s wide stance address the aerodynamic challenge of incoming airflow meeting the ‘reversing flow’ of air carried by the wheel and tyre moving forwards through the fork. This reversed flow stagnates behind the fork and disturbs airflow around the outside of the fork onto the down tube.”

“To solve this, Factor designed a converging nozzle into the fork crown to accelerate the reversed flow out of this area, significantly reducing the pressure changes met by the relatively clean air traveling over the outside of the head tube and fork legs, and thereby improving laminar flow and cutting overall drag.

“Additionally, by significantly increasing the width of the fork legs, the fork legs and the wheel rim are each able to operate in airflow that is undisturbed by the other, allowing the aero profiles to function at optimum efficiency.”

According to Factor, the fork is optimized for 25mm tires, although there’s enough clearance to accommodate 32mm tires provided the rim has a 21mm internal width.

“Fully internal cabling brings further gains and [we have] achieved this while maintaining a 1 1⁄8in top headset bearing for optimized frontal area, whereas many other brands increase the head tube size to accommodate internal cabling, cancelling out the benefits,” says Factor. The bike is also compatible with separate handlebars and stems, with cabling entering below the stem.

Factor claims the Ostro tips the scales at 780g for a size 54cm, courtesy of TeXtreme, Toray and Nippon Graphite pitch-based carbon fiber, which is quite impressive for any frame let alone an aero one.

“It achieves its remarkable lightness in three ways,” says Factor. “The tube profiles were carefully developed to balance aerodynamics against weight. The down tube, for example, has almost exactly the same cross-section as that of the O2 VAM.”

“Also shared are the exceptionally high grades of carbon fiber material used and the industry-leading manufacturing techniques employed to get the very best from them, all made possible because Factor owns its factory and can pass considerable efficiencies to the customer.”

The Ostro’s geometry is identical to that of Factor’s existing O2 and O2 VAM.

“This is the optimum racing geometry for confident handling and that is unchanged by this bike’s broader role,” says Factor. “Consistent geometry makes it easy for our pro riders to switch bikes and for our customers to choose based on the riding that they do.”

The new Ostro frameset is available for pre-order directly from Factor, which sells for $5500 and includes the brand’s seatpost, integrated Black Inc. bar and stem, along with CeramicSpeed’s bottom bracket and headset bearings.