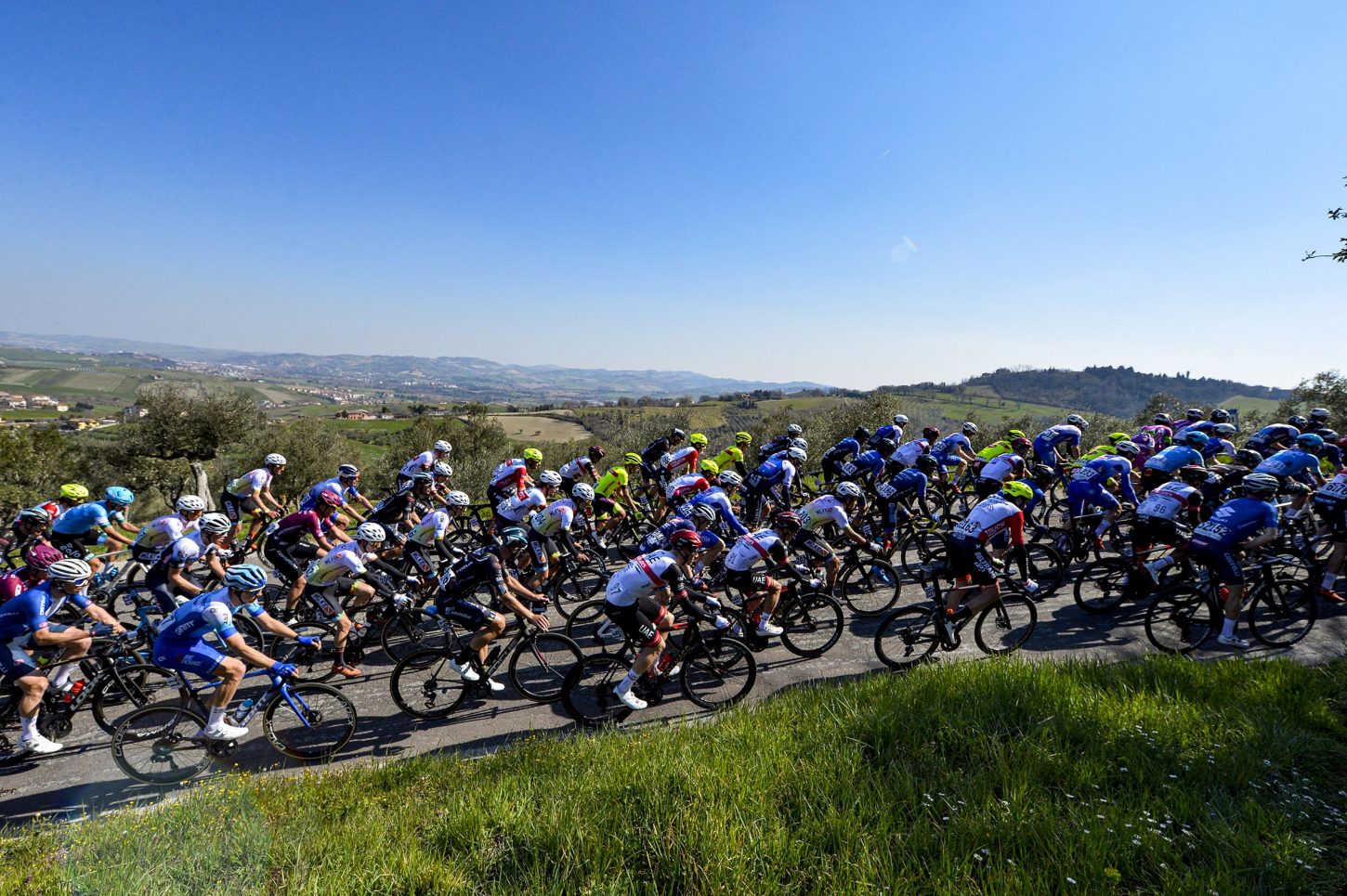 Enric Mas (Movistar) stormed to victory in the Giro dell’Emilia today, dropping two-time Tour de France champion Tadej Pogačar (UAE Team Emirates) in the closing moments of the race, after the Spanish rider attacked along the final ascent of the iconic San Luca climb to triumph in Bologna.

With 9 kilometers to go, Mas broke free from the peloton alongside Pogačar in a two-pronged move. However, the duo was later joined by Domenico Pozzovivo (Intermarché-Wanty-Gobert Matériaux), Rigoberto Urán (EF Education-EasyPost) and Mas’s teammate Alejandro Valverde.

With 2 kilometers remaining, Mas commenced his winning move, quickly opening up a 10-second gap over the group along the final, uphill drag. Both Pogačar and Pozzovivo tried to follow, but could only watch as the Movistar rider soloed to victory.

From there, the breakaway group’s advantage stretched out to just over seven minutes after 50 kilometers of racing, but the escapees’ time was reduced considerably over Cà Bortolani.

With three minutes between break and peloton as the riders hit the Medelana,  Guarnieri and Meens were the first men to drop back from the leaders, eventually leaving just Bouchar and Goossens out front after  Pluimers lost contact.

The first lap of the hilly closing circuit only saw the peloton close in further, with Goossens later finding himself alone out front with 30 kilometers to go.

Meanwhile, attacks started to fly from the peloton on the second lap as Tao Geoghegan Hart (Ineos Grenadiers), Alessandro De Marchi (Israel-Premier Tech), and Pierre Latour (TotalEnergies) jumped away to join Goossens up front on the descent from San Luca. The quartet held a small gap of 15 seconds heading into lap three, but behind them UAE Team Emirates were charging along in pursuit.

At 20 kilometers remaining, the group was brought back along the third of five ascents of the San Luca, leaving UAE to control the race into the final laps as Diego Ulissi and Davide Formolo pushed a high pace ahead of Pogačar.

The two riders kept plugging along, until their control was broken by a move by Lorenzo Fortunato (Eolo-Kometa) with 10 kilometers to go.

His acceleration subsequently roused big favorites into action, with Pogačar reacting along with Movistar’s Enric Mas and Domenico Pozzovivo of Intermarché-Wanty-Gobert. Over the top, however, it would be Mas and Pogačar who led the way over the top, the Spaniard looking to put his rival into a bit of difficulty with a jump towards the summit.

A seven-strong group of chasers, made up of Formolo, Pozzovivo, Fortunato, Mas’ teammate Alejandro Valverde, plus Rigoberto Urán (EF Education-EasyPost), Rudy Molard (Groupama-FDJ), and Ruben Fernández (Cofidis) trailed at 15 seconds, leaving a likely two-man battle for victory the next time around.

It was Urán who led the moves from behind on the descent, the Colombian leading Valverde and Pozzovivo across to the two leaders in time for the final test up San Luca. Mas was the first to strike from the lead group, jumping 2 kilometers out after Valverde had set it up for his teammate.

Mas’ move was met with no immediate reply behind, even from the usually unflappable Pogačar. The Slovenian rider, accompanied by Pozzovivo, was the closest chaser behind, however. Further back, Fortunato was making a move to get across to Valverde and Urán.

Mas pushed on into the final kilometer alone, while neither Pogačar nor Pozzovivo could mount a rearguard challenge to the 27-year-old.