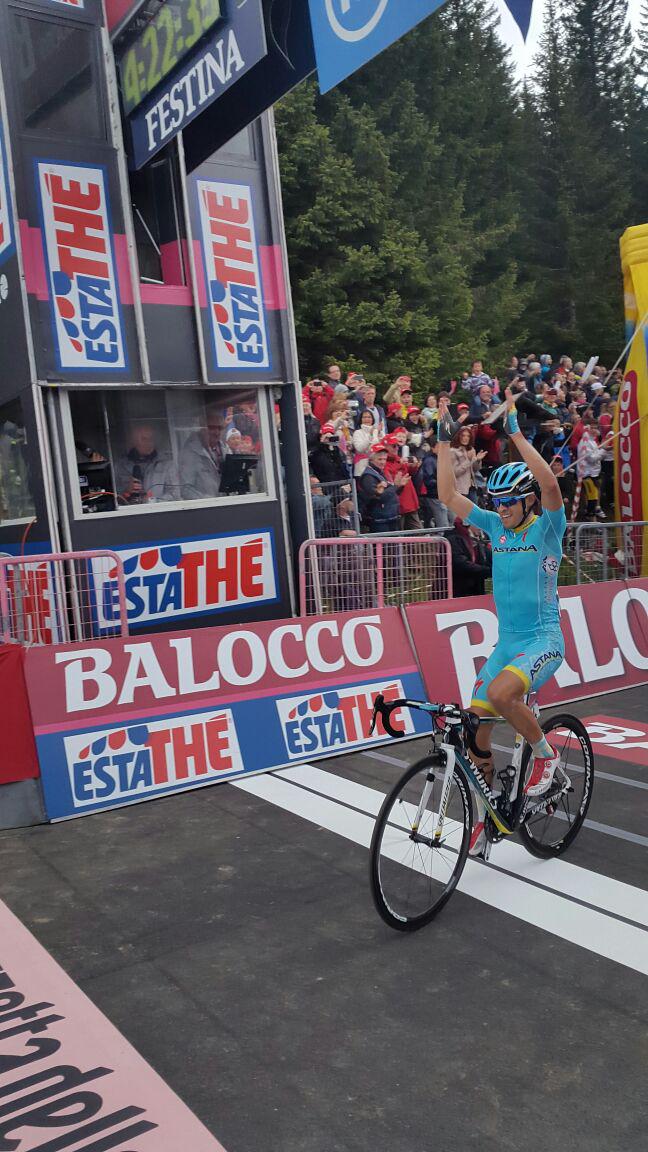 Mikel Landa claimed stage 15 of this year’s Giro d’Italia, after his Astana team made a concerted effort to dethrone Alberto Contador from the race lead today.

Indeed, Landa and his teammate, Fabio Aru, tried everything to dispatch the Tinkoff-Saxo rider during today’s mountainous 165 kilometer stage from Marostica to the climb of the Madonna di Campiglio, however, a resilient Contador not only managed to stay onboard with this rivals, but in the course of doing so, succeeded in picking up some bonus seconds as well.

“We have a very good team in the climbs and today it was the best part of the Giro,” said Landa at the finish. “Obviously we wanted to finish with Aru in the best place that we can but it was difficult. We have the second place with him and we will still try to win the Giro, playing with the superiority of the team.”

With 3 kilometers remaining, Landa attacked, but Contador was able to respond immediately while Aru proceeded to lose contact.

However, Aru was able to make his way back to the front, and even attempted his own short-lived attack during there final 2 kilometers.

With the trio back to together, the leaders subsequently slowed down and switched their focus to one another rather than setting a pace. Meanwhile, this allowed Yury Trofimov (Katusha) to catch back up and quickly pass them.

For a few moments it appeared as though the Russian rider might clinch the victory, but Landa responded with another attack just before the final 1 kilometer banner, catching and passing Trofimov some 500 meters later, and holding on for the win.

Contador out-sprinted Aru for third, capping off a day in which, despite being isolated earlier on, he never looked in trouble. Michael Rodgers was the only domestique to still be with him at the top of the penultimate Passo Daone climb, and he then was distanced on the descent after being caught up in a crash.

Eventually a group of ten riders came together to form the day’s breakaway group.

Still,, the group never allowed to remain too far outside of the peloton’s clutches, as they were all caught before the lower slopes of the final climb.