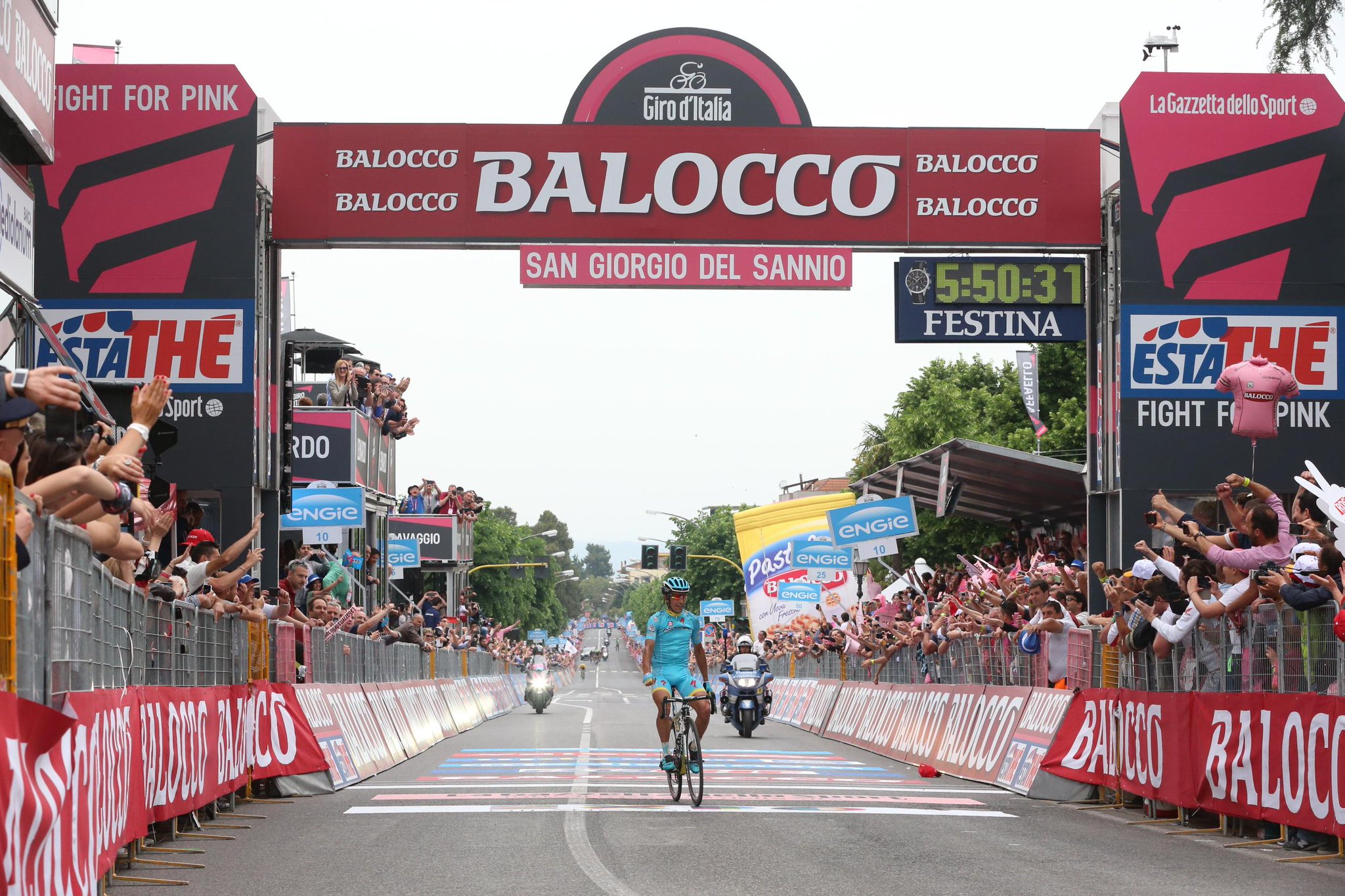 Paolo Tiralongo (Astana) claimed stage 9 of this year’s Giro d’Italia today, after launching a late attack from the day’s breakaway, to commence a solo victory in San Giorgio Del Sannio, ahead of Stephen Kruijswijk (LottoNL-Jumbo) and Simon Geschke (Giant-Alpecin).

“We’ve been riding great all week, and we wanted to win a stage,” said Tiralongo. “We’ve been close, and today was my chance. I attacked at the right moment, and had the legs to finish it off.

“This is a great way to finish the week. Now I will work to help Aru in this Giro.”

“Right now it looks like it won’t be easy to take the pink jersey away from Contador,” Tiralongo said after the stage. “He’s a real champion, but there is still time.”

“For us, it is important to concentrate on Fabio Aru. I was in the break group to support him, and then saw that it could work out for me.”

Contador was happy to have defended his lead, and called it “the most unusual stage I have ever experienced.”

From there, the breakaway group went on to establish a lead of 4:30 over the peloton, as they tackled the first climb of the day – the Monte Termino.

As the breakaway group crested the climb, they had succeeded in extending their lead to 5:53 – giving Moinard the virtual leader’s jersey, while Geschke was the first rider over the top, followed by Betancur and Tiralongo.

As the race reached the second climb of the day, the breakaway group’s advantage fell considerably, while Sergio Paulinho emerged from the peloton to make his way to within a minute of the lead group.

In the meantime, Hesjedal won the first sprint of the day, ahead of Moinard and Herrada.

Shortly thereafter, Colbrelli was the first rider to fall off pace with the breakaway, only to be joined Belkov, while Paulinho was also unable to keep up his pace, and subsequently fell back into the peloton.

As the race tackled the category 1 climb of the Colle Molella, what remained of the breakaway group, was holding onto a 2:06 advantage, with Geschke as the first rider over the summit, followed by Betancur and Kruijswijk.

Back in the peloton, Astana could longer contain their enthusiasm, and set Dario Cataldo on the attack during the descent. But, an equally determined Tinkoff-Saxo, along with race leader Alberto Contador, countered his move – quickly bringing the Italian rider back into the fold.

Back up front, Slagter was the next rider to try and ride clear, earning the second intermediate sprint points of the day, along with a three second time bonus for himself as well.

A motorcycle crashed along the descent, briefly gave pause to the peloton, as they slowed past the accident.

Meanwhile, Slagter did not wait for his companions after the sprint and kept going – building up a slight lead for himself.

At that point, the peloton had fallen back to five minutes inside the final 50 kilometers.

As the race reached the 40 kilometer mark, Tiralongo decided to attack, and was quickly joined by Herrada. However, their time in front of the peloton was short-lived, as the duo was soon reeled back in.

Elissonde was the next rider to try his luck during the final 15 kilometers, only to see Tiralongo once again emerge from the peloton and shoot right past him. But, just like his previous attempt, he soon found himself back in the clutches of the peloton.

However, an undeterred Tiralongo attacked but again, this time on the ascent of the Passo Serra.

Back in the peloton, the chase was now left up to Contador and a handful Astana and Sky riders.

From there, Aru decided to make his move, taking Contador, Porte and Landa with him.

At that point, the breakaway group was still clinging to a 2:46 lead. However, riders were fall off the pace left and right, as the fiercely determined quartet began picking them off one-by-one.

Heading into the final 5 kilometers, Slagter and Tiralongo were still holding onto a 1:35 lead. But, at that point, Slagter was unable to keep pace with his companion – leaving the Astana rider out on his own.

From there, Tiralongo went to a solo victory, crossing the line by almost half a minute over his closest rival. 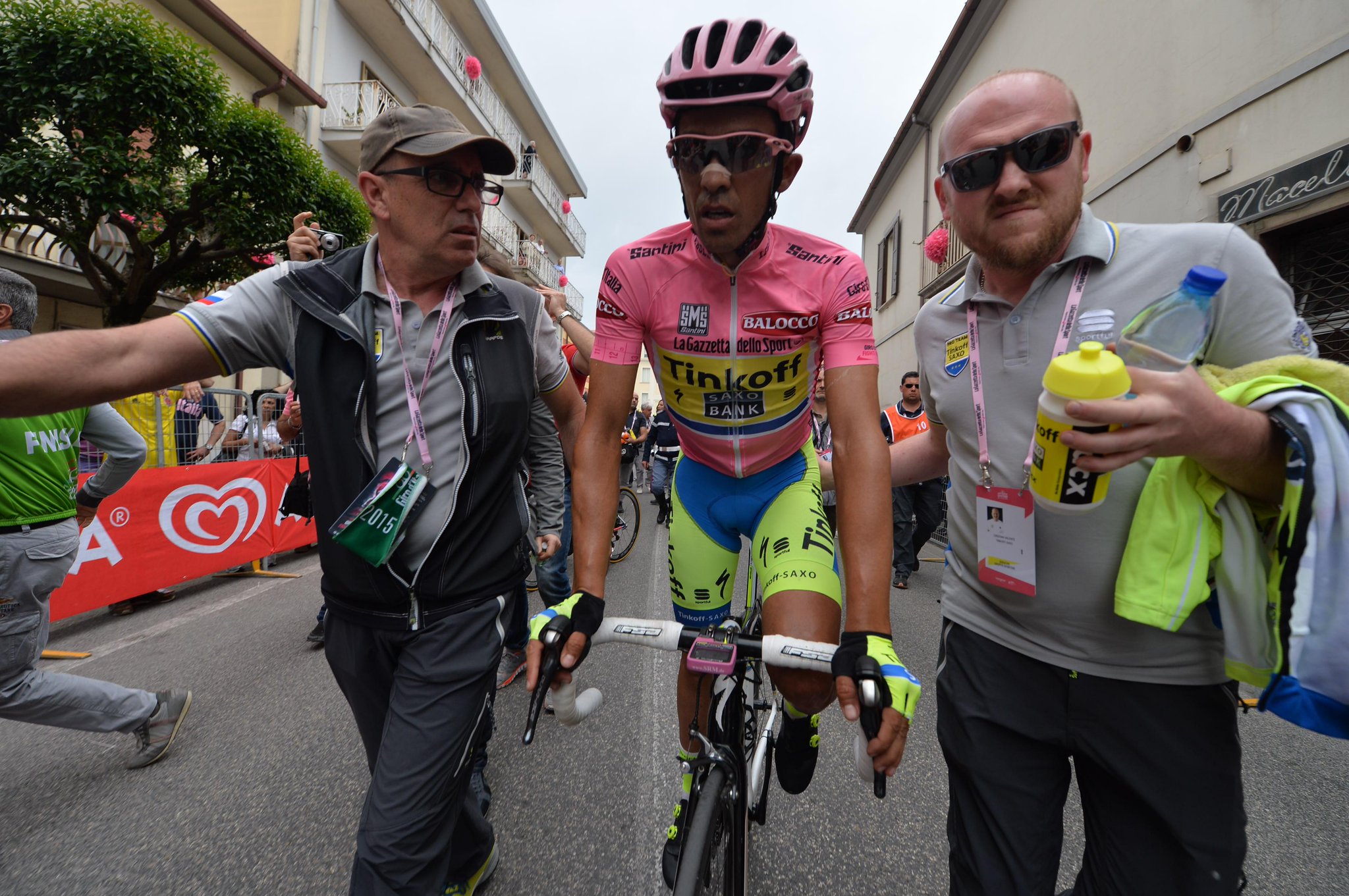