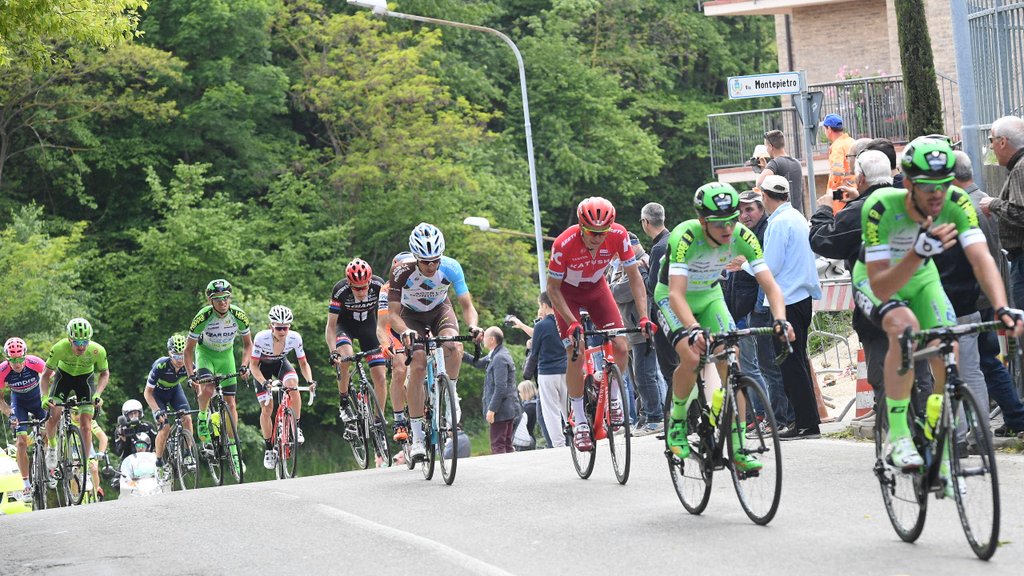 The Italian neo-pro Giulio Ciccone (Bardiani-CSF) took a surprising victory in stage 10 the Giro d’Italia today, after crossing the finish in a solo affair nearly a minute ahead of his closest rivals, Ivan Rovny (Tinkoff) and Darwin Atapuma (BMC Racing).

“I could never have imagined winning a stage here because it is my first year as a professional, it comes as a big surprise,” said the young Ciccone. “This is a fantastic victory, and thanks to everyone, and to my whole team.”

“Today is the best day of my life,” he said. “The emotions are massive. It’s a feeling I can’t describe – I don’t have the words. I would like to thank everyone in my team on what is a really huge day”, Ciccone added.

“Why not? he replied when asked if he’d hunt for another victory. “We will all try again. We are here for stage wins and we won’t be happy with just one win. We won’t rest on our laurels; we’ll continue to fight.”

Ciccone was part of a trio of riders containing Rovny and Atapuma, who were all that remained from the day’s breakaway, after the group began to splinter along the final climb of the Pian del Falco.

Ciccone would later distance his two rivals along the descent, and steadily increase his lead along the final climb to Sestola – to clinch a solo victory.

Meanwhile, back in the peloton, a battle ensued for the maglia rosa, with Gianluca Brambilla (Etix-QuickStep) sacrificing himself to assist his teammate, Bob Jungels, fend-off and challenges from Andrey Amador (Movistar), to takeover the race lead.

“It’s unbelievable,” Jungels said of his teammate’s sacrifice. “Cycling hasn’t seen this many times – this was very special.

“It shows the spirit of this team. We are a great group of friends. Two days ago I was happy for him that he kept the jersey in the time trial and now he worked for me and he’s happy I’ve got it. It’s an amazing team.”

Jungels now leads the race by 26 seconds over Amador, with fellow Movistar rider Alejandro Valverde moving up to third after a slight split in the closing metres saw him gain four seconds on Vincenzo Nibali (Astana) and Steven Kruijswijk (LottoNL-Jumbo), who had both started the day ahead of the Spanish rider.