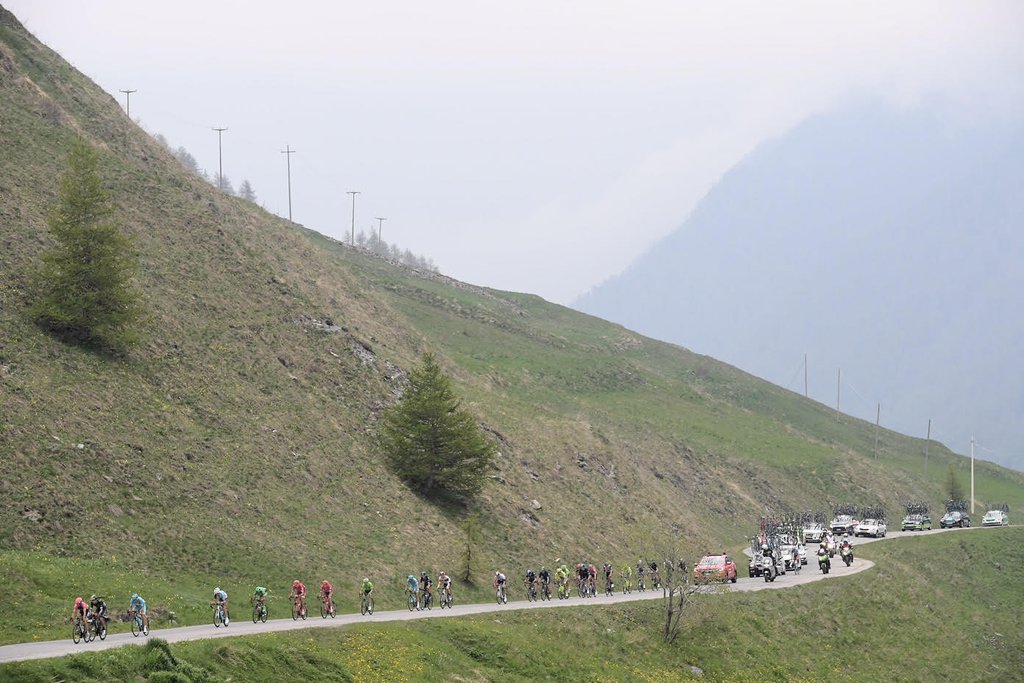 27 May 2016
By Gianni Pericolo - In THE GREAT RACE, Uncategorized

Vincenzo Nibali (Astana) claimed an emotional solo victory in today’s stage 19 of the Giro d’Italia, after commencing a late attack that saw the Italian rider seize the stage honors by almost a minute ahead of his closest rival, Mikel Nieve (Team Sky).

Meanwhile, race leader, Steven Kruijswijk (LottoNL-Jumbo), crash heavily along the descent of the Colle Dell’Agnello, costing him valuable time to Esteban Chaves (Orica-GreenEdge), who capitalized on the Dutch rider’s misfortune to takeover the maglia rosa.

Kruijswijk finally got a new bike from his team car, and rejoined the race. But, the LottoNL-Jumbo rider was left to struggle along the final climb of the day, while his rivals, Nibali, Chaves and Nieve forged ahead.

A 28-rider breakaway group finally got away after 70 kilometers of racing, with Astana’s Michele Scaroni claiming the first summit victory on the penultimate climb of the day.

Back in the main field, Chaves commenced an attack towards the summit, with only Kruijswijk and Nibali able to follow his move.

However, the group later came back together along the decent.

Tragedy would later strike Kruijswijk, as the race leader lost control along the snowy descent, subsequently crashing into a drift.

Ilnur Zakarin (Katusha) was another GC contender to suffer on the descent, after going off the edge of the road which resulted in a broken collarbone and his abandonment from the race.

With a damaged bike and his team car quite a ways back, there was nothing the Dutch rider could do but try and catch Nibali and Chaves with a malfunctioning drivetrain, while his rivals proceeded to open a 30 second gap.

As the Nibali group hit the final climb, Scarponi and the rest of the remaining breakaway group were caught, with the Italian rider turning to assist his fellow Astana rider get away on the final climb.

Maxime Monfort (Lotto-Soudal), who was the only rider left out front from the breakaway group, was caught and passed by Chaves and Nibali as they got away from Valverde, Majka and Rigoberto Uran (Cannondale).

The leaders then quickly went on to establish a one minute advantage over the group, with Team Sky’s Mikel Nieve jumping into the mix.

An isolated Kruijswijk looked to be suffering on the Category 1 climb to Risoul and began to steadily conceding time to the leaders ahead.

With 5 kilometers to go on the final climb, Chaves began to fade as well, when Nibali attacked.

However, Chaves was ultimately able to mitigate the damages set forth by Nibali, and eventually cross the finish just two seconds behind Nieve.

As a result, Chaves now leads the Giro d’Italia with a 40 second margin over Nibali.