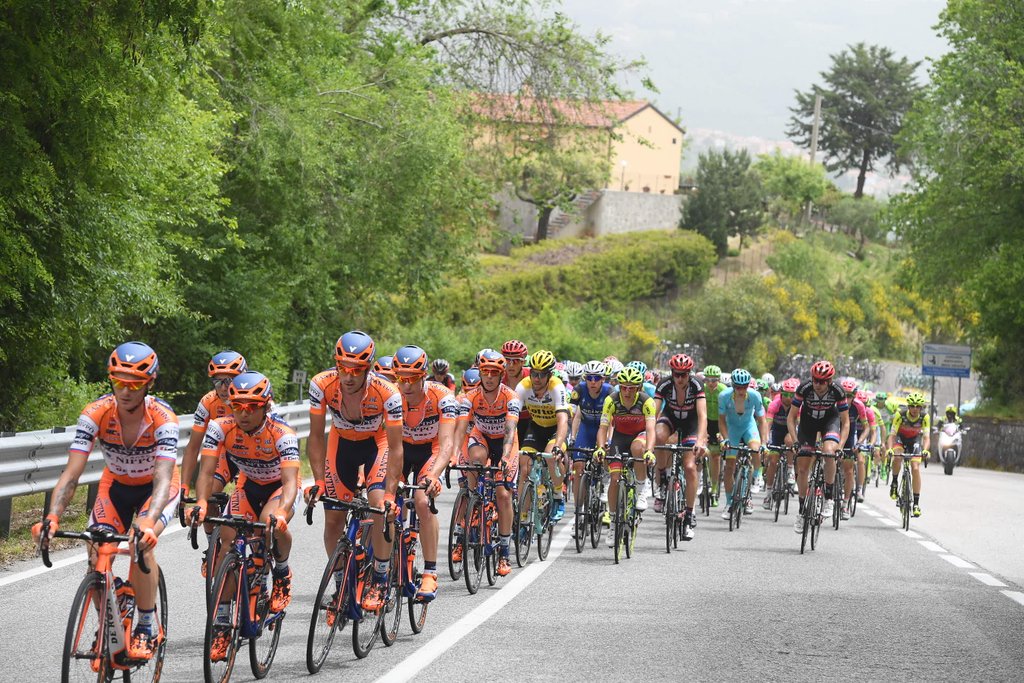 Andre Greipel claimed stage 5 of the Giro d’Italia today, after winning a tough uphill sprint in Benevento by a wide margin, to open up his account in this year’s Italian Grand Tour.

The Lotto-Soudal powerhouse launched an early surge for the finish along the punchy flagstone ramp, spotting a gap and never looking back as he roared to the fourth Giro stage victory of his career.

“I went too early but I thought I’d give it a go – I saw the gap and I just went for it,” said Greipel, who joins Kittel and Rudi Altig as the leading German stage winners on the Giro with four wins apiece. “I had good legs today so even if my team is a fantastic part of it I still did a great sprint today,” Greipel added.

Meanwhile, Arnaud Demare (FDJ) won the distant battle for second place ahead of Sonny Colbrelli (Bardiani-CSF) after the red jersey and pre-stage favorite Marcel Kittel (Etixx-QuickStep) was dropped on the challenging finish circuit at the end of the 233-kilometer stage from Praia a Mare.

Additionally, Bob Jungels (Giant-Alpecin) took fourth place and slashed his deficit to race leader Tom Dumoulin (Giant-Alpecin) by four seconds thanks to a split on the front of the pack. However, Dumoulin still managed to retain his hold on the maglia rosa, keeping a 16 second lead over Jungels.

Greipel now trails compatriot Erik Zabel by two wins in the list of Germany’s all-time leading stage winners on Grand Tours. The succession of uncategorized climbs ahead of a demanding 6.6km finishing circuit that featured both cobbles and uneven polished flagstones proved too much for Greipel’s countryman, Kittel.

The Etixx-QuickStep rider won the opening two road stages in the Netherlands but has struggled to show his mettle on the undulating terrain of southern Italy. Kittel, however, retained the red points jersey ahead of the race’s first summit finish on Thursday, while Italian veteran Damiano Cunego (Nippo-Vini Fantini) doubled his lead in the blue mountains classification after taking maximum points on the only categorized climb of the day, 35 kilometers after the start.

With Cunego having secured the points, his Nippo-Vini Fantini team took their foot off the gas and a break was allowed to form. Four riders – Russians Alexander Foliforov (Gazprom) and Pavel Brutt (Tinkoff), Italian Daniel Oss (BMC) and Spaniard Amets Txurruka (Orica-GreenEdge) – broke clear to build up a maximum lead of eight minutes as the race left Calabria and made its way toward Campania.

Oss took the spoils over both intermediate sprints before losing his front wheel on a tight bend and crashing into a fence. The Italian was able to fight back into the break but the gap steadily came down thanks primarily to the work of Greipel’s Lotto Soudal team.

The leading quartet hit the final cobbled section for the first time with just a 10 second advantage, before being swallowed up by the peloton  with seven kilometers remaining.

By now Kittel had been dropped and Greipel was being ushered to the front by Roelandts.

Demare, Colbrelli, Sacha Modolo (Lampre-Merida), Moreno Hofland (LottoNL-Jumbo) and Caleb Ewan (Orica-GreenEdge) were jostling for positions as well, when Katusha’s Rein Taaramae hit the deck on the final tight bend before the uphill rise to the line.

Worthily thereafter, a slight lull followed, allowing Griepel seized on a golden opportunity as the road opened up in front of him.

From there, the German rider succeeded in powering his way through the gap and leave his rivals struggling in his wake.

As a result, Demare was forced to battle for second place against Colbrelli, Jungels and Hofland.

In the meantime, Ewan discovered that the Giro finishes are far harder than those of last year’s Vuelta – after only mustering a ninth place finish.

GC riders Ilnur Zakarin (Katusha) and Alejandro Valverde (Movistar) were placed at the back of the leading group and were able to steal four seconds back from their pink jersey rivals thanks to a split between the top fourteen riders and the rest of the main pack.

Spanish veteran Valverde is now just one second behind race favorite Vincenzo Nibali (Astana) in the overall standings and 27 seconds down on Dumoulin on the eve of the first summit finish of the race.