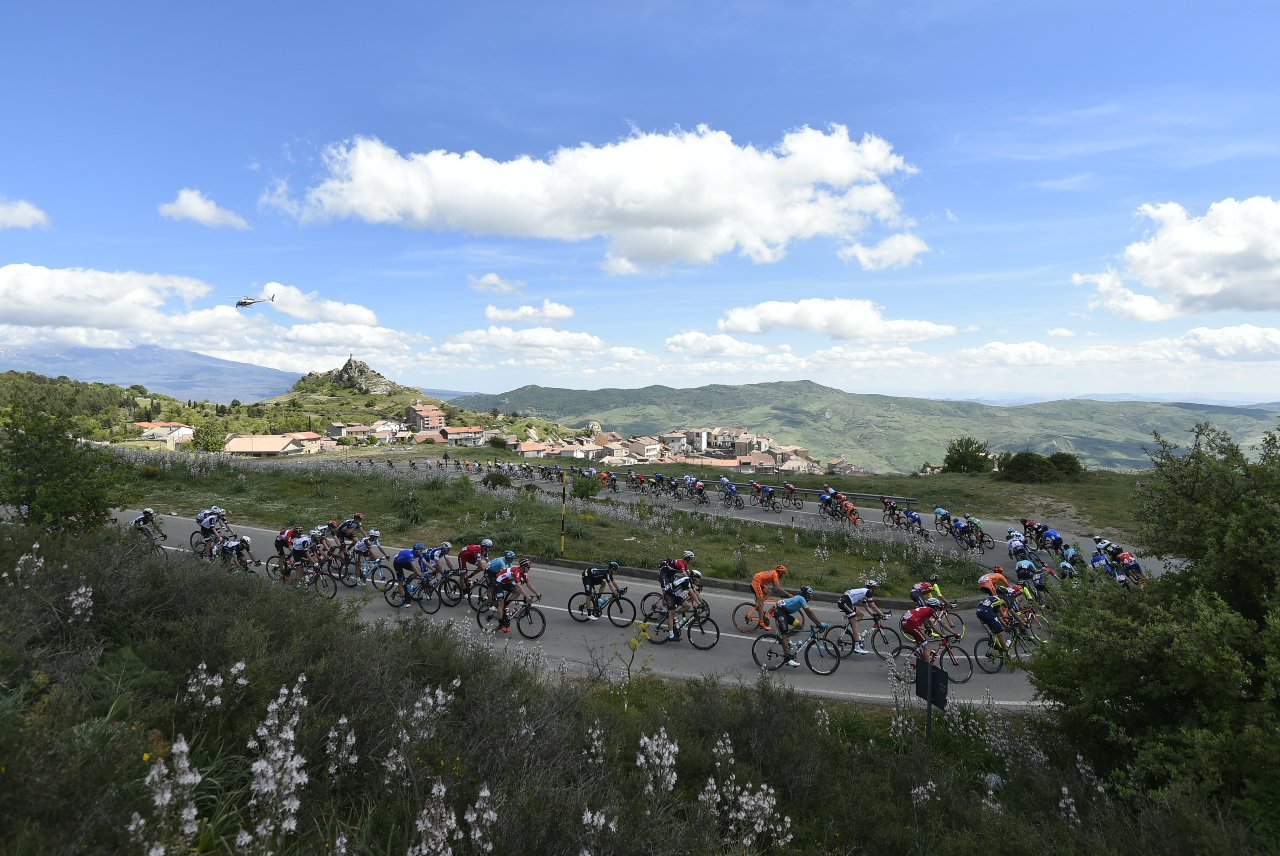 Polanc went on the attack with just two kilometers remaining, subsequently holding off a 179-rider strong peloton that tried to chase down the Slovenian rider in earnest.

Bob Jungels (QuickStep Floors) finished well enough to seize control of the maglia rosa, while his teammate and former race leader, Fernando Gaviria, slipped down in the overall standings.

From there, the group went on to quickly built up an advantage of more than eight minutes over the peloton.

However, after the second category climb of Portella, Alafaci lost contact with his breakaway companions, who’s lead at that point had dropped to around six minutes over the peloton.

Brutt was the next escapee to get dropped along a small climb before the start of Mount Etna, followed Janse van Rensburg – leaving Polanc to forge ahead alone.

Back in the peloton, a poorly-marked corner instigated a crash that saw a bunch of riders go down, with Fernando Gaviria (Quick-Step Floors) and several Katusha-Alpecin riders amongst the casualties.

However, with 16 kilometers to go, a recovered Gaviria, alongside his teammate, Jungels, finally rode clear of the peloton in pursuit of Polanc.

Paolo Tiralongo (Astana) was the first to attack from the peloton, having said that he would in memory of team-mate Michele Scarponi. But, his move was relatively short-lived, while the main field proceeded to regroup in pursuit of Polanc.

Pierre Rolland (Cannondale-Drapac) then made a move with 13 kilometers to go, quickly soloing away from the peloton.

At that point though, Polanc was still more than three minutes ahead, as the peloton failed to organize an effective chase effort.

Mikel Landa (Team Sky) suffered a badly-timed puncture with 11 kilometers to go, with a team-mate assisting in the absence of the team car. The wheel change took a while and the Spanish rider was left with some distance to catch up. Philip Deignan dropped back to pace him back up to the bunch, but with valuable energy expended.

As Polanc hit the steeper part of the Etna, despite showing obvious signs of exhaustion, he was still maintaining a lead of more than two minutes over the chase.

Back in the peloton, Ben Hermans (BMC Racing) decided to move up to the front of the group and increase the chase effort, which also served to reel in Rolland.

After a few short-lived moves from Nibali, Jesper Hansen (Astana) and Igor Anton (Dimension Data), Zakarin was the next rider to launch an attack.

Heading into the final kilometer, Polanc was still clinging to a 45-second lead over the peloton, as the UAE rider was seen putting everything he had left to power his way through the final section of the climb in order to stay outside of the grasp of Zakarin and seize the victory.