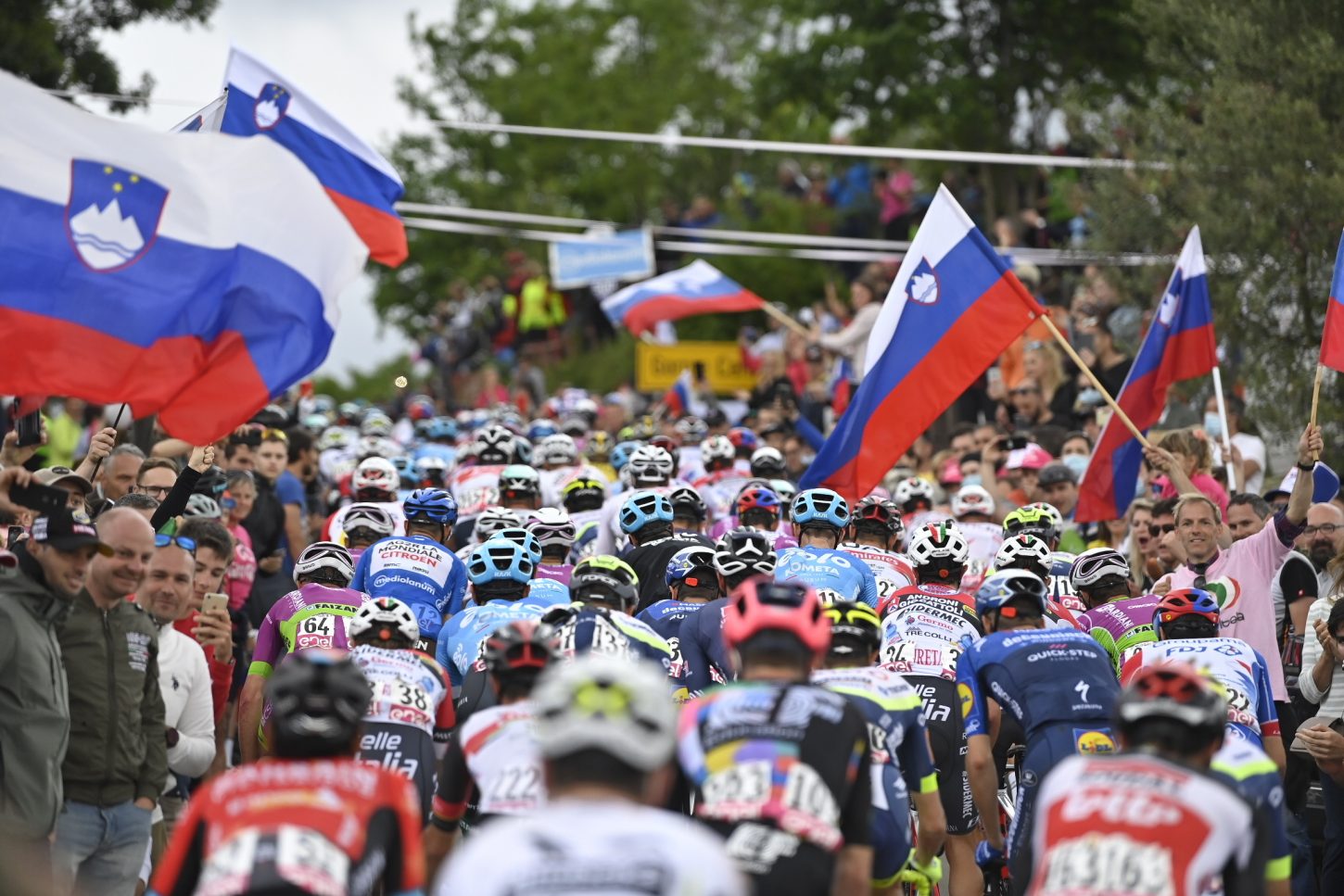 Campenaerts attacked out of a large breakaway of 15 riders, with only Oscar Riesebeek (Alpecin-Fenix) being able to mark his move.

From there, the duo engaged in a tactical battle towards the finish, with Campenaerts overhauling his rival to claim the sprint.

The race soon entered Slovenia, with revved-up spectators crowding the road and wafting a sea of white, blue and red as the Giro served a timely reminder of what sport has been missing these past 14 months.

Ominous clouds were gathering on the horizon as the main bunch sat behind Ineos Grenadiers, with Filippo Ganna and Salvatore Puccio rotating on the front as other teams showed little interest to drive on the pace.

And that was how it remained – 15 riders sharing the load on the front, the peloton calm behind – until the final circuit. Then the heavens opened and the attacks began.

Campenaerts, fully aware of the dangermen all around, dropped off the back before launching past his rivals with 22 kilometers remaining. Only Riesebeek and Torres could respond.

With Torres likely possessing the fastest finish, Campenaerts and Riesebeek racked up the pace again as their lead stretched to 30 seconds. On the final climb to Gornje Cerovo, as the Slovenians created an incredible gauntlet on the road in biblical rain, the Spaniard cracked.

Two remained. Campenaerts and Riesebeek made a series of moves to break the other – Rob Hatch wondering on Eurosport commentary whether they might be better off ditching their bikes and “swimming to the line” – but neither could get away.

Behind, a six-strong chase group containing Torres plus Mollema, Hermans, Arndt, Cataldo and Consonni were beginning to close the gap and with four kilometres remaining there was just 14 seconds at play, but the front duo worked together to keep their advantage, somehow marrying solo attacks with harmony.

It soon became clear the chase was forlorn, allowing the front two to slow and embark on a track-style finish in the final few hundred meters, watching each other intently. Riesebeek was the first to blink, pulling out of Campenaerts’ wheel and making a dart for the line, but the wily Belgian duly repeated the trick and had too much in the finale to take a memorable win in Gorizia.

Bernal and the peloton trundled home some 17 minutes later, the main group having safely navigated a slippery finale.

Almost 6,000m of climbing awaits them on Stage 16 as the Giro heads into the Dolomites, with fireworks expected in the battle for pink.