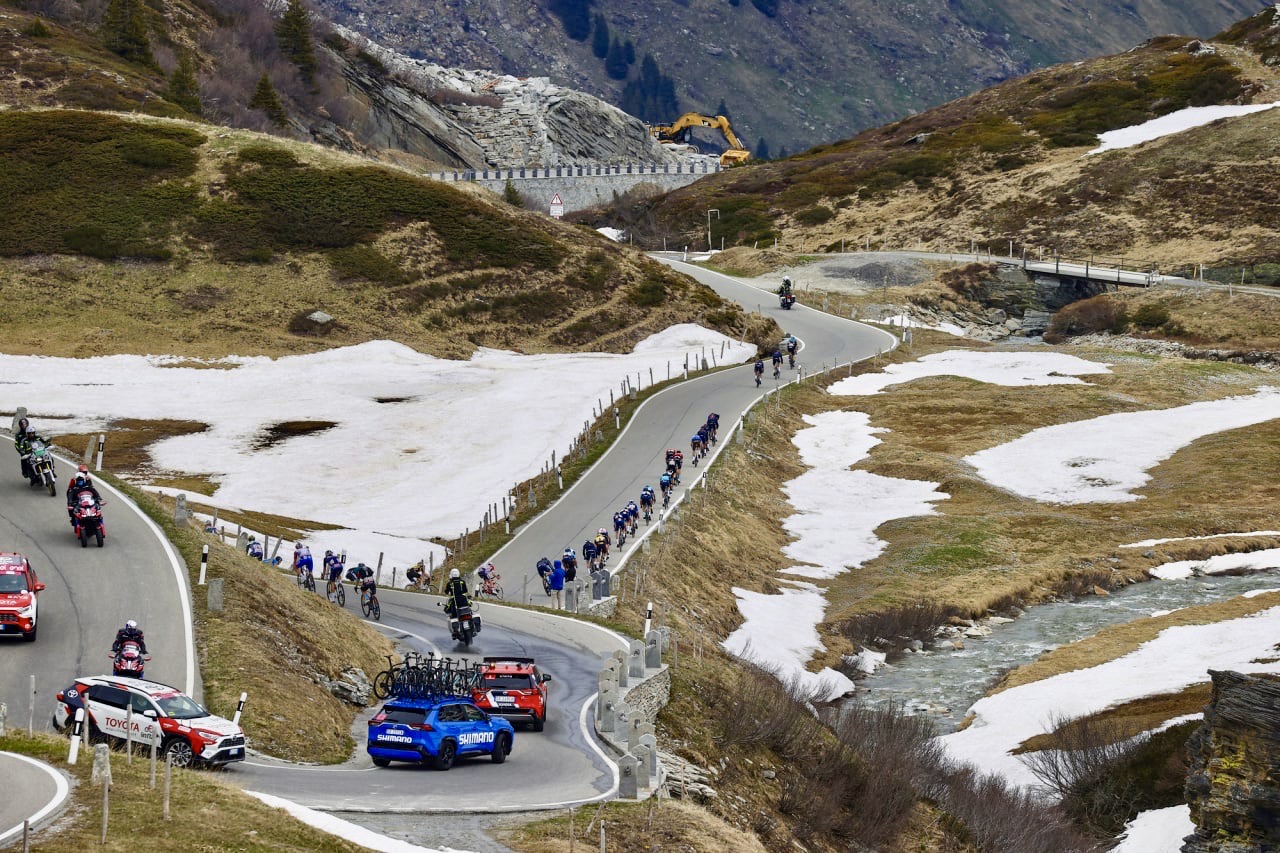 Damiano Caruso won stage 20 of the Giro d’Italia after a brave attack that saw him secure his second-place in the overall classification. Egan Bernal finished second on the stage, meaning that barring a disaster in tomorrow’s stage 21 time trial in Milan he will be wearing the maglia rosa on the final podium.

Simon Yates lost time after being distanced on the final climb, Bernal’s team-mate Daniel Martínez driving the pace to deliver his leader safely to the finish.

Caruso had moved off the front of the GC group on the descent of the first San Bernadino climb with around 50 kilometers to go alongside teammate Pello Bilbao, following a move by Team DSM to try and set up Romain Bardet

Bardet and Caruso were the last two escapees up the road until the Frenchman cracked, leaving Caruso to keep Bernal and the GC contenders at bay as he crossed the line to win his first-ever Giro stage and only the third victory of his professional career.

“I thought about a thousand things in the last meters before the finish line, all my sacrifices, my training, and all the work done by my teammates,” Caruso said.

“We rode in an exemplary way today, Pello Bilbao in particular did an incredible job and he played a fundamental role in this victory. Today I realized a dream, I think I am the happiest man in the world!”

The day began with a furious fight to get in a break, but the peloton controlled all these attempts until the first intermediate sprint – largely this was down to Bora-Hansgrohe trying to protect Peter Sagan’s ciclamino jersey.

It was an attacking move from Team DSM on the upper slopes of the Passo San Bernardino that finally spelled the end for the escapees. The hot pace set by DSM on the way up San Bernardino was matched by their impressive, aggressive descending, which allowed them to open up a gap back to Bernal.

They were joined by Caruso and his teammate Pello Bilbao, forming a strong fighting force that maintained their advantage all the way to the final climb, the Alpe Motta. When Bilbao pulled off exhausted, Caruso picked things up for himself and climbed the whole of Alpe Motta on the front himself. Bardet didn’t give the Italian a single turn on their way up the final ascent, and yet was still dropped with a handful of kilometres to go. Caruso, propelled on by the frenzied cheers of the tifosi, was strong enough to maintain a gap of 20 seconds, despite the valiant chasing effort of Dani Martinez. Martinez was third across the line at the summit.

Peter Sagan secured the victory in the ciclamino points jersey today, something of a formality it must be said after an imperious points performance from the Slovakian.

Geoffrey Bouchard couldn’t quite make it into the break, but enough of the day’s king of the mountains points were hoovered up by the attackers to preserve his position at the top of that classification.

“We knew how to manage the race again today. My teammates did a great job and Castroveijo managed things perfectly and did a great job. I have to thank them.”

“I was scared of losing. I’m full of different emotions. I had the legs and the team, but there was Caruso up front who was a GC rival. When he got 30 or 40 second, even if I felt good, I was worried I could suffer. It was easy to lose 1:30 and then have to fight in the final TT.”