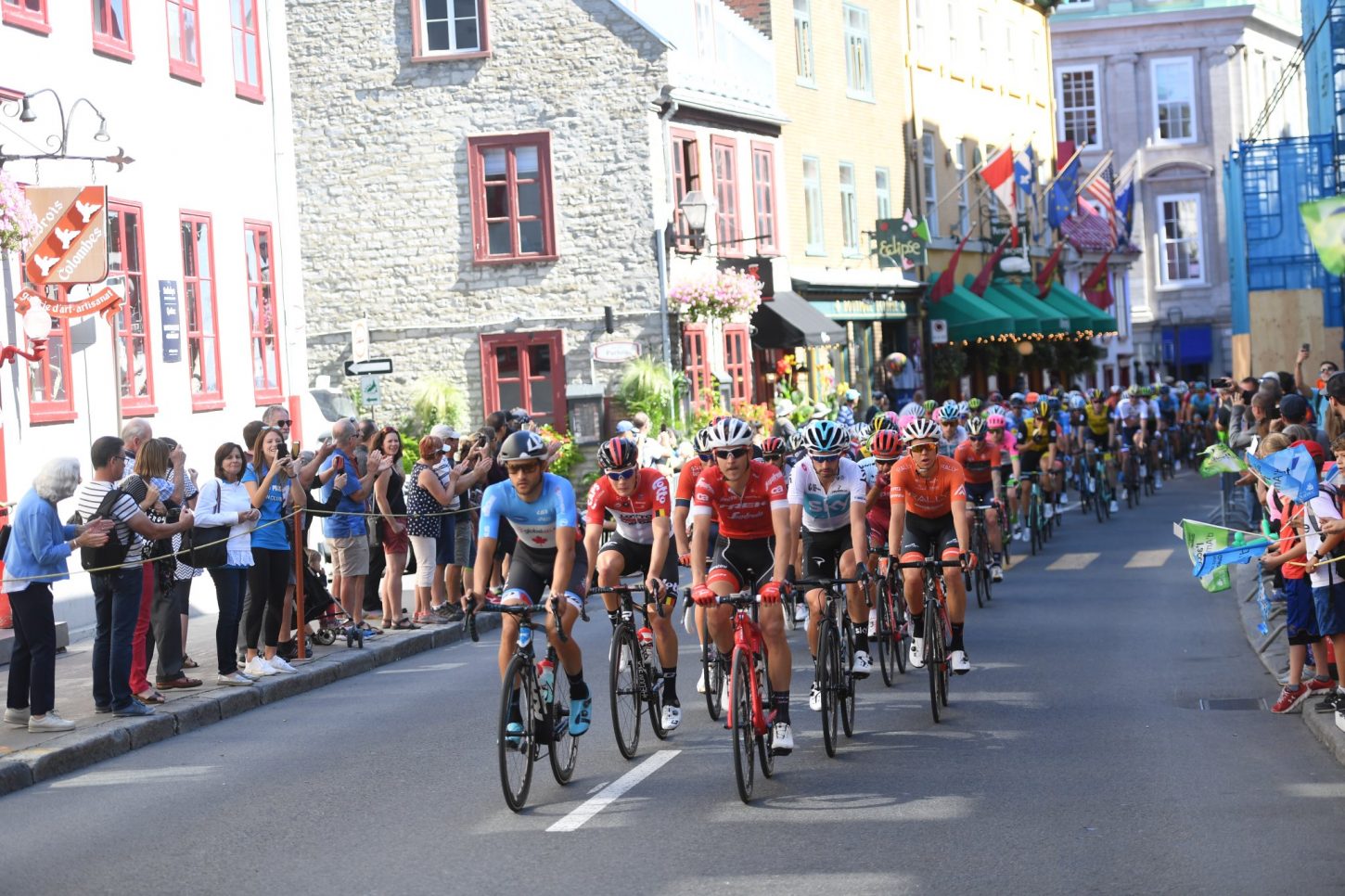 Matthews came out on top over a pair of Belgians, including 2016 Montrèal winner Greg van Avermaet (BMC Racing) and Jasper Steven (Trek-Segafredo) yesterday to claim the first of two Canadian WorldTour races in Québec this weekend.

The Australian rider, who is fresh off a stage win and a runner-up general classification standing at the Binck Bank Tour (UCI 2.UWT) and fourth at the Bretagne Classic (1.UWT) last month, claimed his 32nd pro victory at Grand Prix Cycliste de Québec (1.UWT) at the end of the 201.6-kilometer road race in Québec City.

Last year’s Tour de France points champion, who was forced to abandon this year’s Tour prior to the start of Stage 5 due illness.

“This is my first win in a classic,” said Matthews. “I’ve had wins on each of the Grand Tours and I won the green jersey on the Tour de France. But I had never won a one-day race at WorldTour level and I’m especially happy it took place in Québec as I love coming here every year. That’s the thing I thought about when I crossed the line.

“I’m the second Australian to win here after Simon Gerrans,” he continued. “He was one of my idols in cycling. It was one of my team’s goals today to race here the way he did in 2014 and I was capable to do that. He won’t be here next year unfortunately.”

For the 2016 Olympic champion, it was a bittersweet result after now finished second Québec City for the fourth time.

“I was twice second behind Peter Sagan, now I’m behind Michael Matthews,” said 33-year-old van Avermaet. “I’m on the podium again. That’s something. It’s a good result for me too. I launched the sprint with 200 meters to go.

“I like to do long sprints, but Michael was really strong. I was behind him and I could not do any better. But I’m glad with my form and I hope to do better in Montréal.”

The quintet quickly pushed their gap out to three minutes as they rounded the first lap, and then to six minutes before the 50-kilometre mark.

BMC did the lion’s share of the pace-setting to stop the breakaway from gaining any additional time, which would keep Van Avermaet in contention for the day’s win.

Three separate crashes happened on course with BMC’s Nathan Van Hooydonck doing down on the descent off of the Cote Gilmore 35 kilometres into the race. He was able to get back on his bike and resume his efforts at the front of the field. Movistar’s Nuno Bico wasn’t as fortunate after a dog ran into the peloton causing him to hit the ground and abandon the race.

A larger crash took down four riders: Ruben Plaza (Israel Cycling Academy), Joe Dombrowski (EF Education First-Drapac), Lachlan Morton and Tom-Jelte-Slagter (Dimension Data). All were able to resume racing with the exception of Plaza, who abandoned in the final laps.

The gap to the breakaway dropped to under four minutes when Sunweb took to the front of the race to assume the responsibilities with roughly 60km to go (five laps). Their advantage was cut down to one minute, however, with three laps to go as Michael Valgren led Astana in a heated chase to bring back the five men and reset the race in the closing laps.

The breakaway fell apart over the repeated climbs with Sagiv and British rider the last to hang on to a small lead. The pair were joined by Kennaugh, who bridge across on the penultimate lap.

Remi Cavagne (Quick-Step Floors) countered that move from the main field, joined by Baptiste Planckaert (Katusha-Alpecin) and Sebastian Reichenbach (Groupama-FDJ) but their efforts proved fruitless and they were brought back several kilometres later.

Kennaugh pushed hard over the punchy climbs, which proved to be too demanding for breakaway riders Britton and Sagiv, and the pair sat up and drifted back into the field after a long day out front.

BMC Racing pushed the speeds near maximum ahead of the main field, catching the six chase riders with seven kilometres to go, while Kennaugh desperately tried to hang onto his mere 20-second lead.

He pushed over every small rise and sat tucked onto his top-tube on every descent, but only a handful of seconds separated him from the field in the last kilometer. He was eventually caught within 400 meters to go, just as the bunch kick ignited.