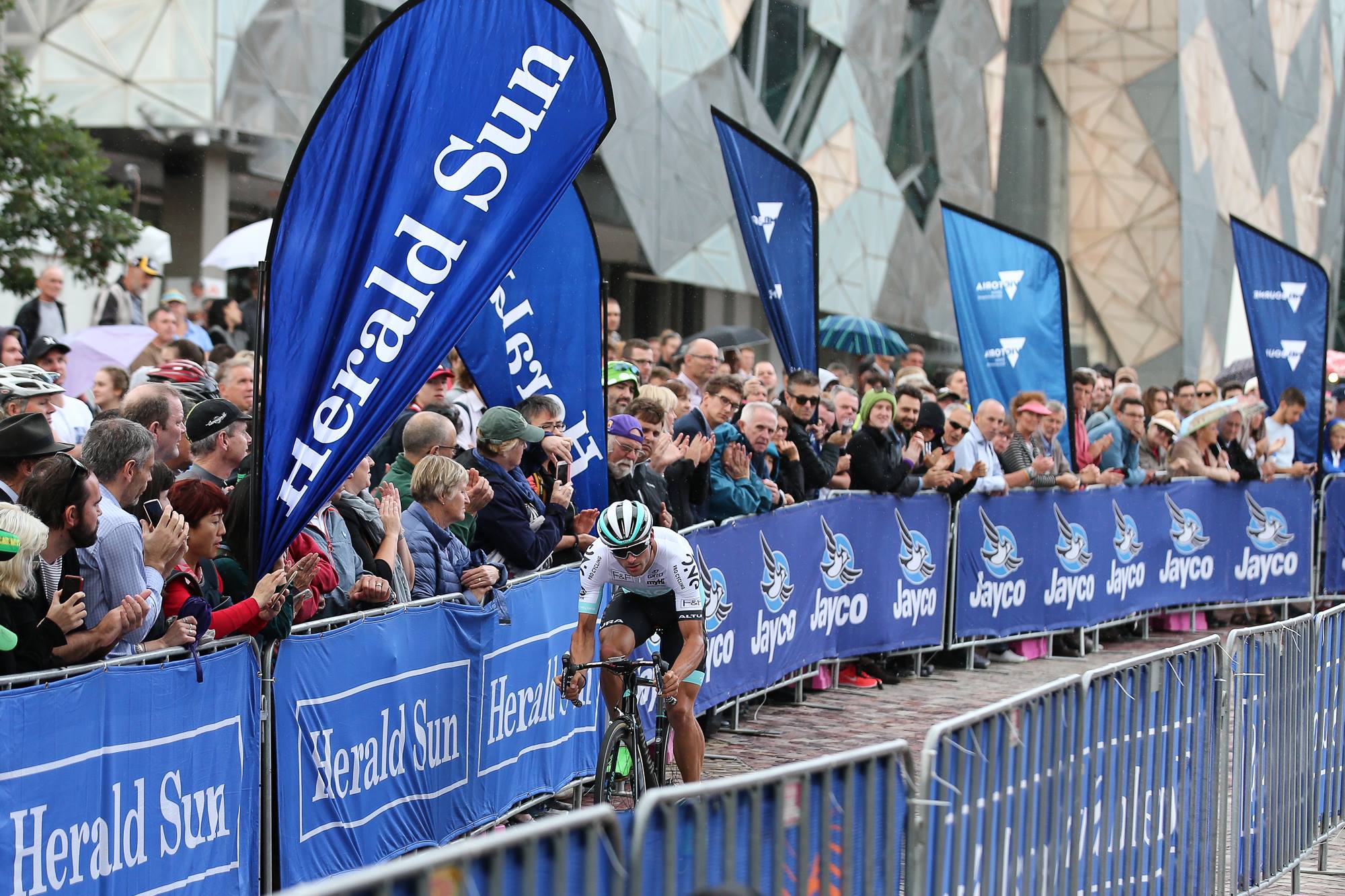 Drapac Professional Cycling’s Will Clarke rode to an impressive back-to-back victories at the Jayco Herald Sun Tour’s Prologue in the Melbourne CBD. Clarke repeated his victory from last year’s prologue and will once again wear the yellow leader’s jersey for Thursday’s first stage at Healesville.

Clarke, from Tasmania and a powerful prologue specialist, admitted that given Ewan had pushed him all the way in 2015, that the sprinter was the only rider he truly feared.

“It was a nervous wait for me actually, starting 40-45 minutes before him [Ewan]. I thought he’s good in the corners and he very fast. The course suits him as well.”

The time was a new course record, with Clarke bettering his 2015 time by just under a second.

Ewan felt that he had ridden similarly to last year.

“I left it all out there and I still came up short,” said the 21-year-old having seven race wins to his name so far in 2016. “I was pretty confident with my form and how it was going so I knew I was going to do a good ride – obviously I wasn’t good enough to win.

“Will was super-strong today, as he was last year and he does really well in these short time trials,” Ewan continued. “It was always going to be hard to beat him.”

All eyes were on the fortunes of two-time Tour de France winner, Chris Froome (Team Sky) who left the start house in Federation Square to raucous applause. While a longer race against the clock is closer to his liking, Froome still got to the line in a time of 2:42.10, eight seconds in arrears of Clarke and in 26th place.

Froome said the Prologue was a great way to begin his race, just his second appearance at the Jayco Herald Sun Tour.

“It was definitely a bit of a lung opener,” he said. “Just under three minutes – it’s a short, intense little sprint.

“It was a good ride by Will there to repeat that and win by one second, it was impressive.”

With the first climbs of the 63rd Jayco Herald Sun Tour greeting the peloton tomorrow, Froome admitted he would be a lot more comfortable.

“I’m looking forward to that and hopefully the road goes uphill a bit more,” he said. “The main objective today was just to stay upright. I think the racing is still going to be decided over these next few days and undoubtedly on Arthurs Seat at the end, that’s going to be the big day.”

Clarke for one, is anticipating some action from Team Sky, with a battle for the General Classification set to begin in earnest. The Tasmanian uncertain of what the Healesville stage will bring.

“It would be nice to hang on to the jersey for a day or two but we have to see how the race plays out. With such a short prologue the time gaps aren’t huge so it’s not like I’m 10, 20 seconds up on anyone,” he said.

“Whoever wins tomorrow has got a good chance of pulling on the leader’s jersey. Maybe we need to send a few guys up the road and defend our interests that way.

Clarke admitted that Sky was likely to go on the offensive.