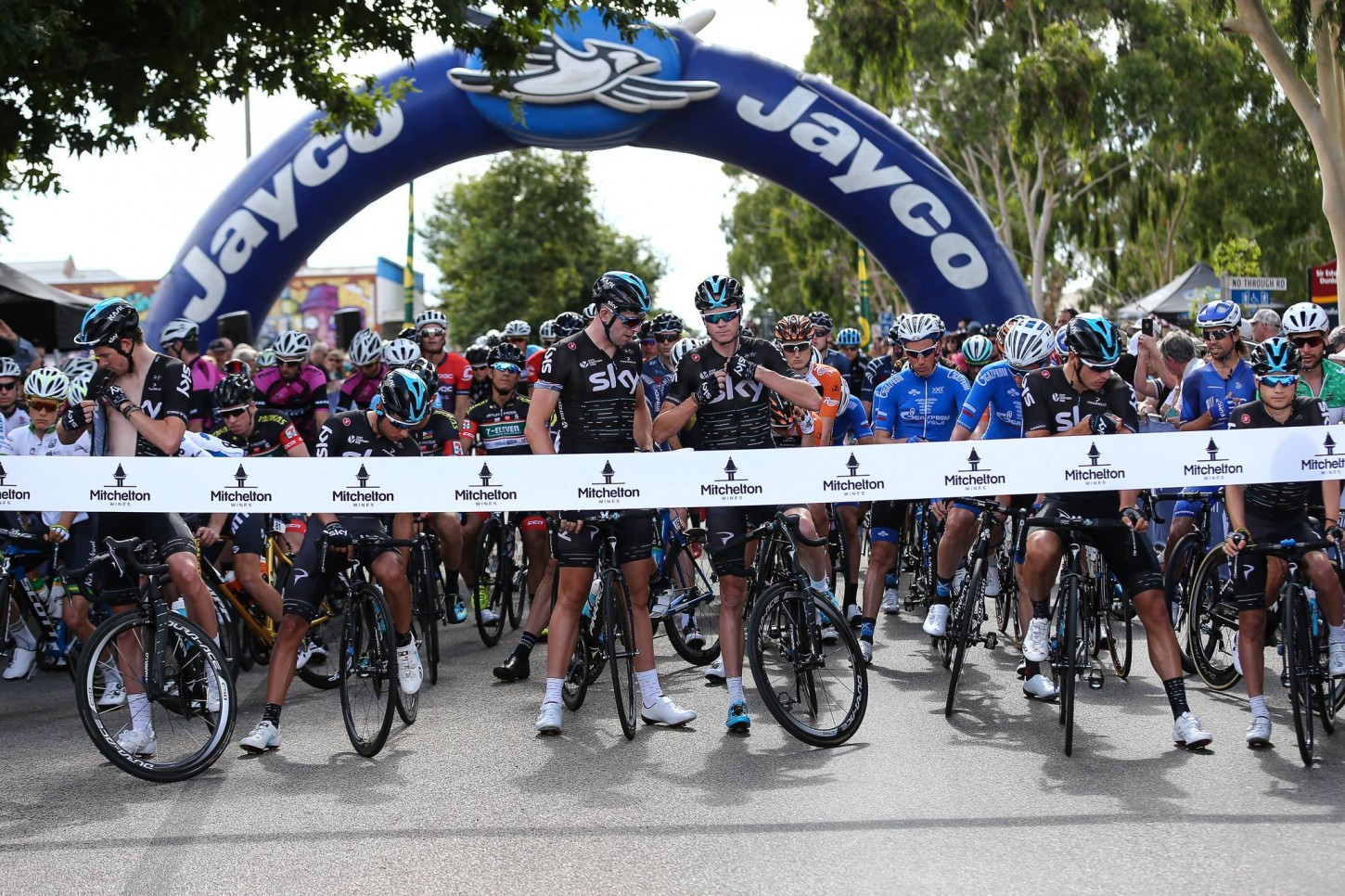 American rider Travis McCabe made himself right at home in the heat of the Australian summer, confidently driving the UnitedHealthcare Blue Train to victory on Stage 3 of the Jayco Herald Sun Tour.

McCabe navigated his way through the crash-marred final kilometers to finish close to two bike lengths ahead of Mitch Docker (ORICA-Scott) and Leigh Howard (Aqua Blue Sport) with a group of just 16 riders contesting the win at Mitchelton Winery.

Overall leader Damien Howson (ORICA-Scott) was spared from having his advantaged diminish after he was caught behind the crashes, with the commissaires awarding bunch time. Howson maintains his 38 second lead over Jai Hindley (KordaMentha Australian National Team) with Kenny Elissonde (Team Sky) a further 15 seconds back.

The UnitedHealthcare sprinter had targeted the stage and had finished in the top 10 at the Prologue on Wednesday night. Adding to the pressure was the fact that the team came away with a sprint victory at the 2016 Jayco Herald Sun Tour and UnitedHealthcare was keen to double down.

“Mitch attacked at 200 meters to go and I just knew I had the legs and so I went as soon as he did and held it to the line with a fairly decent gap so I’m really happy,” said McCabe, who is in his first year with the team and so was pleased to deliver a win so early in the season.

Nervousness in the peloton in the final kilometers, ahead of the technical finale, contributed to the two crashes that occurred inside the last five kilometers. The incidents also ruled out some of the pre-stage contenders even being in with a chance of attempting the win, including Danny van Poppel (Team Sky) and Brenton Jones (JLT Condor).

“The crash was unfortunate,” McCabe admitted. “It came down to a sprint but a lot of guys weren’t really there for it because of that crash. It would have been nice to see how my legs hold up against the true sprinters.”

The 27-year-old, who said that today’s win was on par with his victory at last year’s Tour of Utah, paid tribute to the efforts of his team for their navigation over the latter part of the 167.7km stage.

“It was about staying safe and out of trouble,” McCabe explained. “You are so close to everyone and everyone’s head butting and everyone’s fighting. I think the heat and that little climb took a lot of energy out of the legs. I think guys weren’t fully aware of what they were doing and caused the crash. Once I made it out of that and I came into that [final] corner third wheel behind Mitch Docker I knew I had a really good chance of winning.”

For Howson, it was a second straight day of high-stress racing after his mechanical nearly put an end to his stint in the yellow jersey on Friday.

“It was another nervous day,” he said. “The sprinters had their chance today and everyone was fighting and jostling for position in that final five kilometers. It made for some dangerous, exciting racing but I’m happy to get through unscathed.”

A final selection for the day’s breakaway took over 25km of racing to settle, after an early attempt of 16 riders including Howson and Chris Froome (Team Sky) failed to content the peloton.

Meijers took both KOM primes on offer but was unable to make a dent in the classification lead of Ben Hill (Attaque Team Gusto). Likewise for the sprint primes, with none of the breakaway riders in contention to challenge the 10-point lead of Jake Kauffman (NSWIS).

After 113km of racing, the nine riders in the breakaway were given their maximum amount of rope by the peloton, with a gap of just over four-and-a-half-minutes. That gave Brutt the virtual leadership of the yellow jersey, starting the day 3min44sec behind Howson but soon after, the peloton decided enough was enough and began to reel the group in.

Cross winds buffeted the peloton with 30km remaining, with some riders struggling to hold on. Soon after, the breakaway’s game was up with Team Sky and JLT Condor leading the chase. With the race back together, and the technical finish looming, a touch of wheels brought down swathes of riders. Craig Evers (7 Eleven – Sava RBP) was taken to hospital for a suspected broken collarbone while many riders suffered grazing.

Howson will have to battle to stay in yellow at the end of tomorrow’s finale at Kinglake. It’s a battle that he’s ready for with the chance for his name to join the likes of Tour de France winners Brad Wiggins and Froome.

“I’ve seen that honor rolls and it’s an extensive list of quality bike riders,” Howson said. “I can’t jump ahead of myself. I still have an epic day tomorrow to conquer and after that hopefully it’s champagne showers all around and I’ll be very happy to join that list.”