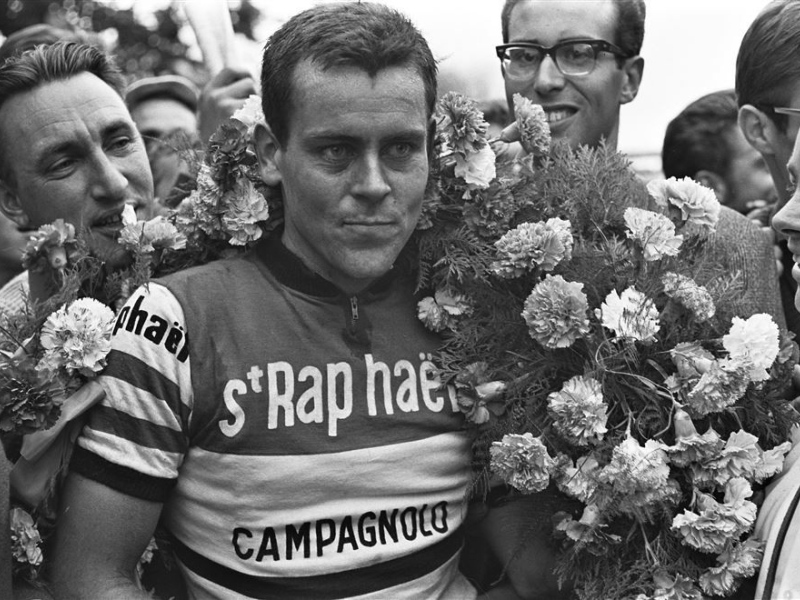 The Dutch rider first caught the attention of the cycling world in 1957 as a 20-year-old amateur when he took two stages in the Olympia’s Tour as well as winning the Omloop van de Kempen. The following year he turned professional with the Dutch Magneet-Vredestein team, with which he stayed for two season. In 1960 he moved to the Helyett, which had Jacques Anquetil as leader. He rode for five years with Anquetil at Helyett and then at St-Raphaël.

In 1960 he rode his first Tour de France, abandoning after stage 14 and saying the Tour was not for him.

1962 was De Roo’s best year as a professional. He won the Gerrit Schulte Trophy as Dutch cyclist of the year after winning Paris–Tours, the Giro di Lombardia and Bordeaux–Paris. De Roo’s Autumn Double of Paris–Tours and the Giro di Lombardia in the same year is a rare achievement as the races are different in style and topography. In winning the 1962 Paris–Tours, De Roo was awarded the Ruban Jaune for setting a record speed for a professional race of 44.903kmh over 267 km. In 1962 De Roo also won the Super Prestige Pernod International, a season-long competition to find the best rider in the classics and top stage races.

De Roo did not go to the 1962 world championship after a disagreement over expenses with the Dutch cycling federation.

De Roo repeated the Autumn Double in 1963. In 1964 he was Dutch road race champion and then returned to the Tour de France after a three-year hiatus to win the stage between Montpellier and Perpignan. In 1965 De Roo left Anquetil’s team and signed a two-year contract with the Dutch Televizier squad, which included Gerben Karstens. 1965 saw victory in the Tour of Flanders when he escaped with Ward Sels on the Valkenberg and then won the sprint. Another stage win came at that year’s Tour de France, into Bordeaux. 1966 saw victory at the Omloop “Het Volk”; he won another stage in the Tour de France on his birthday (between Montpellier and Aubenas) and a stage in the Vuelta a España between Madrid and Calatayud.

De Roo spent the last two years of his career (1967 and 1968) with Willem II-Gazelle, riding in the company of Rik van Looy and Peter Post in the last days of their careers. He rode the 1967 Tour de France as part of the Dutch national team and finished 76th. Jo de Roo retired at the end of 1968 at 31. His last victory was on 25 June 1968 in Zomergem.