Joaquim Rodriguez to Retire at the End of the 2016 Season 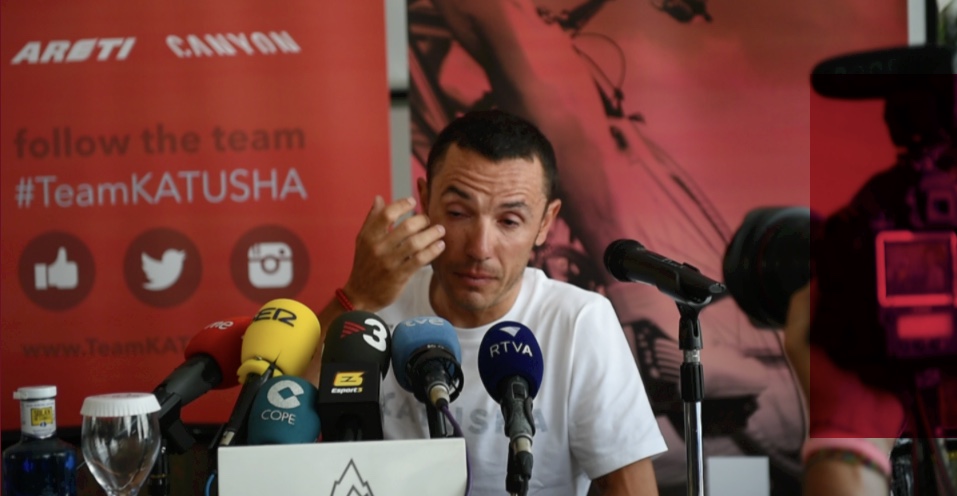 Joaquim Rodriguez announced today, that he will be retiring from racing at the end of the 2016 season.

“I’d like to announce that this is my last year of competition,” an emotional Rodriguez said, before pausing to steady himself. “I’d like to stop while I’m still at a good level. I love this sport and I wouldn’t change a thing about these years I’ve spent as a professional. I’d like to thank my family and everybody who has supported me during my career.”

However, the Spanish rider has not yet indicated which race will be his final, but he did confirmed his participation in both next month’s Rio Olympic Games and the Vuelta a Espana.

“I will give my maximum like I did my whole career. I would be happy to finish my Tour career in top ten, but of course I still dream of another overall podium in Paris: the support I got yesterday on the Pyrenean roads helps me to go on,” he said. “For the moment I have no idea what my last race will be. In theory, Rio and the Vuelta a Espana are still on my program.”

Rodriguez has been one of the most consistent riders of the decade, as evidenced by his podium finishes in each of the three Grand Tours, as well as numerous victories in stages races and One Day Classics.

However, a Giro, Tour or Vuelta triumph has always evaded him.

A third place finish in the 2013 Tour de France was but another unfulfilled dream for Rodriguez, followed by another disappointment that season when he was out-sprinted by Rui Costa at the World Championships in Florence –  a defeat he said would stay with him for ever.

“I have so many memories. I think of my super year 2012 with Il Lombardia in the pouring rain but also I think of my silver medal at the 2013 World Championships. Not to have won there still hurts but that’s cycling,” Rodriguez said today,  adding that Alejandro Valverde and Michele Bartoli were the riders who had most impressed him over the course of his career.

Rodriguez turned professional in 2001, later earning the nickname of ‘Purito’ – ‘Little Cigar’ while riding for the ONCE team.

After three years with ONCE, which included a stage win at Paris-Nice in 2003, and two seasons at Saunier-Duval, he joined Caisse d’Epargne in 2006.

After winning the Spanish title in 2007 and placing 6th at the 2008 Vuelta a España, Rodriguez enjoyed a break-out year in 2009, after finishing  second at Liège-Bastogne-Liège and winning a bronze medal at the World Championships in Mendrisio.

Rodriguez would later sign with Katusha in 2010, and go on to experience a zenith in his career, wherein the Catalan rider racked up an impressive list of palmares that included victories in the One-Day Classics, week-long stage races, along with stage wins and podium finishes in all three Grand Tours.

At the end of 2016 Team KATUSHA’s leader Joaquim Rodriguez retires from professional cycling after a successful 17 years at the highest level. During the first rest day of the 2016 Tour de France an emotional Rodriguez announced his retirement at a press meeting in the presence of his family and friends in his home town Andorra La Vella.

– 2016 will be my last season as a professional rider. I still enjoy this sport so much but I am 37 years old. One day I will have to stop anyway and I prefer to do this when I am still riding at a high level. I spoke about this already last year with my family. 2016 is a special year with the Tour de France coming to my Andorra. There are also the Olympic Games in Rio on a course that suits me very well. The most important reason to stop however is my family. They deserve to have me more with them. They always supported me. Now it’s my turn to support them, – said Joaquim Rodriguez.

Rodriguez, last year’s number two on the UCI ranking, is currently fifth in the Tour de France GC and he is still motivated to perform well in his last season.

– I will give my maximum like I did my whole career. I would be happy to finish my Tour career in top ten, but of course I still dream of another Overall podium in Paris. The support I got yesterday on the Pyrenees roads helps me to go on till my last day in cycling. For the moment I have no idea what will be my last race. In theory Rio and Tour of Spain are still on my program, – continued Joaquim Rodriguez.

In 2015 Rodriguez finished second overall in the Vuelta, one of his many Grand Tour podium places (3rd in Tour de France, 2nd in Tour of Italy, 2nd and 3rd in Tour of Spain). Purito Rodriguez ended the season three times (2010, 2012, 2013) as number one on the UCI WorldTour ranking. He has Flèche Wallonne, Giro di Lombardia (twice), a national Spanish Championship, Tour of Catalunya (twice), Tour of the Basque Country and Setmana Catalana on his palmares as well as stage wins in Tour (3), Giro (2) and Vuelta (9).

– I have so many memories. Now I think of my super year 2012 with Il Lombardia in the pouring rain but also I think of my silver medal at the 2013 World Championships. Not to have won there still hurts but that’s cycling. In those 17 years I lived so many things in cycling. The sport of 2016 has nothing to do anymore with cycling in 2000 when I started. I saw so many things and so many good riders, from Johan Museeuw to Nairo Quintana. The two riders who impressed me the most in my career however were Michele Bartoli and Alejandro Valverde. 17 years at the highest level is a lot. I had my best years with Team KATUSHA. They knew about my decision of today and were always on my side. I will never forget that. And… 2016 is not over yet, – concluded Joaquim Rodriguez.