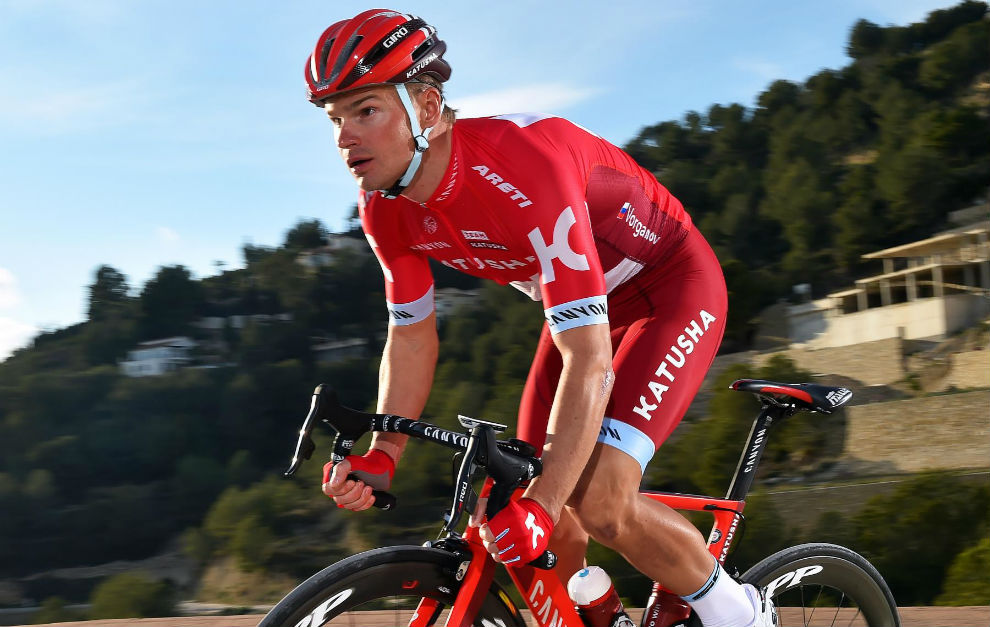 The UCI announced today, that Eduard Vorganov has been provisionally suspended for an anti-doping rule violation, after the Katusha rider  tested positive for the drug Meldonium in an out-of-competition test on January 14, 2016.

As a result of today’s ruling, Kathush is now subject to the UCI’s revised Anti-Doping Rules, which states that a team found in violation of said rules twice within a 12-month period, can face a possible 15-45 day suspension.

The drug Meldonium, which is manufactured in Latvia, was recently added to the World Anti-Doping Agency’s (WADA) list of prohibited substances, after researchers concluded, “Meldonium demonstrates an increase in endurance performance of athletes, improved rehabilitation after exercise, protection against stress, and enhanced activations of central nervous system (CNS) functions.”

In the event that the UCI’s Disciplinary Commission decides to mete out punishment to Katusha, the Russian team will likely be excluded from many of the important early season races, such as the Tour of Qatar, Tour of Oman, Ruta del Sol, and Vuelta Murcia.

Both the UCI and Katusha have issued statements on the matter.

The Union Cycliste Internationale (UCI) announces today that it has notified Russian rider Eduard Vorganov of an Adverse Analytical Finding (AAF) of Meldonium (*) in a sample collected during an out-of-competition control on 14 January 2016.

In accordance with the UCI Anti-Doping Rules (UCI ADR), the rider has been provisionally suspended until the adjudication of the affair.

This constitutes the second AAF for a member of the UCI WorldTeam Katusha (**) within a twelve month period. Therefore, as per article 7.12.1 UCI ADR (***), the UCI will refer the matter to the Disciplinary Commission which will render a decision in the coming days.

(*) Meldonium is classified as S.4.5.3 “Hormone and Metabolic Modulators” and has been added on the Prohibited List on 1 January 2016.

(**) On 10 July 2015, UCI WorldTeam Katusha rider Luca Paolini was notified of an AAF for cocaine in a sample collected during an in-competition control on 7 July 2015. Disciplinary proceedings are ongoing before the UCI Anti-Doping Tribunal.

We understand that the adverse analytical finding concerns the substance Meldonium (also known as Mildronate) which was placed on the prohibited list only on 1 Jan 2016. Team KATUSHA confirms that this substance has never been used by the Team in any form and was not provided to the rider by the team.

In accordance with Team KATUSHA’s zero tolerance policy, Eduard Vorganov has been suspended from all team activities, effective immediately. In the event that Eduard Vorganov took this product on his own initiative, Team KATUSHA will conduct an investigation as such conduct is in breach of the Team’s strict medical and anti-doping internal rules.*

With that said, Eduard Vorganov awaits the results of his B sample, and Team KATUSHA respects and will adhere to the process of the anti-doping authorities and will not comment further at this time.

Team KATUSHA would like to emphasize that it takes all possible measures in order to avoid anti-doping rule violations within its team and is fully committed to fight doping. Team KATUSHA is obviously extremely disappointed that a situation like this could occur despite these measures.

*No medicine, medical substance and/or natural, nutritional or homeopathic (or equivalent) supplement may be purchased, kept, advised or taken by any Team Member, and no treatment can be carried out other than directed by the Team Doctors, unless otherwise approved by the Head Doctor. (art. 10.B.1, 2016 Team Manual)

Any medicine purchased should be compulsory attested by a regular medical prescription written on the headed paper of the doctor who has prescribed the relevant medication. (art. 10.B.2, 2016 Team Manual