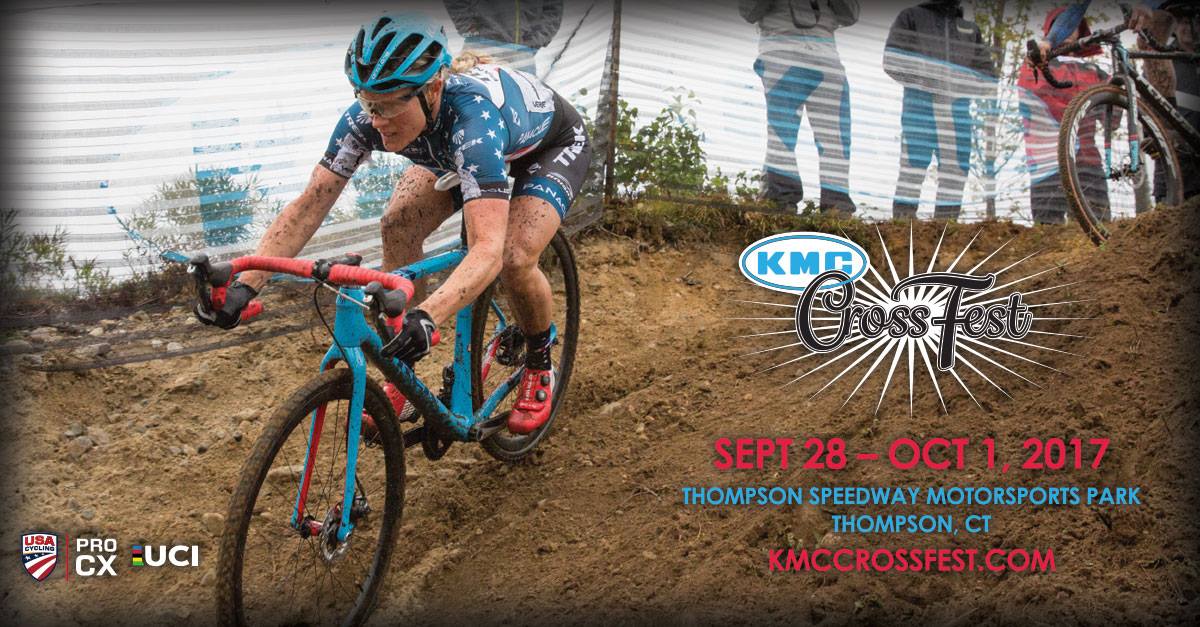 Organizers for the KMC Cross Fest, announced that this year’s event will be extended to four days.

“Our new home in Thompson is perfectly suited to create a demo event for both dealers and consumers. We have a closed road circuit, miles of gravel roads, and a network of nearby mountain bike trails,” said Richard Fries, co-founder of the event, which was held in Providence, Rhode Island, until 2016, when it moved to the Thompson Speedway. “Just like Laguna Seca, this venue is built to host large events. We have classrooms, a bar, restaurants and banquet facilities capable of hosting multiple clinics and demos.”

While UCI-sanctioned cyclocross races will remain the focus of the event, additional family friendly and non-racing activities will be available, including an expo, the Paddock Party, a new mountain bike Gran Fondo, and the Eddy Merckx New England Gran Fondo, which will take place on September 30, and will feature a mix of dirt roads and twisty, rolling, paved New England terrain.

more from the KMC Cross Fest…

Organizers of the ninth Annual KMC Cross Fest will expand the event to four days to feature an exclusive dealer-media event on Thursday, Sept. 28 and will kick off racing on Thursday evening under the lights. Long considered one of the nation’s premier UCI cyclocross races, amateur and elite categories will compete Sept. 29-Oct. 1.

Located within an hour’s drive of Boston, Springfield, Worcester, Hartford and Providence, Thompson is positioned in Connecticut’s “Quiet Corner” near the border with Rhode Island and Massachusetts.

“The best thing we have in Thompson is a strong, long-term partnership with the track management,” said Patrick Goguen, competition director and course designer. Goguen pointed out the track staff studied videos from Circuit Zolder in Belgium, which has hosted world championships in both road and cyclocross. “They are eager to host events of the same caliber (as Zolder) at Thompson and we are confident that we can make KMC equally as prestigious.”

While the UCI cyclocross competition will remain the premier focus of the event, additional family friendly and non-racing activities will be available for riders and spectators alike. With venue features such as camping, Thompson Speedway lends itself to a more festival like feel with additional evening activities, a massive expo, the Paddock Party, a new mountain bike Gran Fondo, and the Eddy Merckx New England Gran Fondo.

Moving one day earlier in the Cross Fest lineup, the Eddy Merckx New England Gran Fondo (formerly Gran Fondo New England) will be Saturday, Sept. 30 and will feature a mix of dirt roads and twisty, rolling, paved New England terrain. Riders can choose from a number of different routes, all of which will return in time for a post-ride meal prior to the start of the elite races.

Eddy Merckx Cycles is excited to to forge a new partnership with the organizers of the KMC Cross Fest on the first annual Eddy Merckx Cycles New England Gran Fondo. “The course, time of year and nature of the event ties in perfectly with what we see to be a true Belgian style fondo,” said Brad Accettella, US director for Eddy Merckx Cycles. “Multiple route options with the perfect mix of gravel, pavement and climbing will give participants an epic day of riding to remember.”

“We are looking forward to making the day truly special for Merckx owners, with special starting location, and other opportunities,” said Heather Rizzi, Eddy Merckx Cycles national sales manager, adding, “I am looking forward to riding myself!”