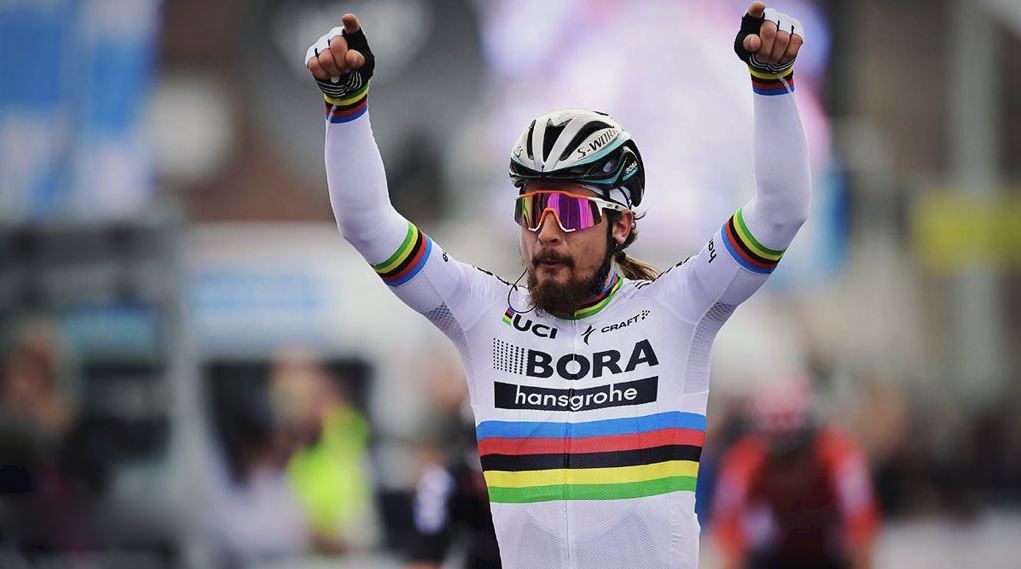 From there, the escapees went on to establish an advantage of around six minutes over the peloton.

However, as the breakaway group reached the Oude Kwaremont with 84 kilometers of racing still left, their gap had been reduced by two minutes.

Back in the peloton, an attack from Zdenek Stybar (Quick-Step Floors), Tiesj Benoot, and Stefan Küng (BMC Racing) sparked some reaction in the chase group, subsequently opening up a slight gap for the trio.

But, the three rider were soon joined by the chase which at that point had swelled to around 15 riders, including defending champion Jasper Stuyven, Peter Sagan, Greg Van Avermaet, Ian Standard, Tony Martin, and four Quick-Step Floors riders looking to make amends for yesterday’s disappointment at Omloop Het Nieuwsblad.

Back up front, the original escapees were still clinging to an advantage of around two minutes, as they hit the climb of the Tiegemberg with 62 kilometers remaining.

While Quick-Step controlled the front of the elite group, the back of the group saw a nasty crash as Tony Martin clipped a parked car and hit the deck hard, suffering nasty injuries to his face, but still managing to somehow ride on.

By the time the race reached its final climb of the Nokereberg with 50 kilometers remaining, the gap to the leaders had shrunk to less than thirty seconds, and 18km later on the long flat road back to Kuurne the catch was made.

For a long time it had seemed like the peloton was out of contention, but hard work by Direct Energie and LottoNL-Jumbo had kept the gap at just 50 seconds, and by the time the front group crossed the finish line to start the first of two finishing circuits, it had fallen further to 27 seconds.

While some of the better sprinters in the front group might not have been too disappointed if the race came back together for a bunch sprint, Jasper Stuyven wasn’t one of them, and the defending champion attacked with 28 kilometers remaining.

Arnaud Démare (FDJ) was the first to react, but quickly sat up to leave the chase up to the BMC and Quick-Step riders, before a counter-attack came from Peter Sagan with Matteo Trentin locked on the world champion’s wheel.

Tiesj Benoot was the next man to jump across, making short work of crossing the gap, before Rowe also made it across to create a five-man group of Benoot, Rowe, Stuyven, Sagan, and Trentin up the road.

That flurry of activity meant that the gap back to the peloton jumped back up to more than a minute, meaning the winner would come from one of the handful of groups from the early move.

The lead group worked well together, taking even turns on the front to quickly open a gap of 30 seconds to the chasers, led by a trio of BMC riders, as they entered the final 15 kilometers finishing circuit.

Working well together, the lead group maintained their gap, continuing to cooperate as each rider reached down to tighten his shoes in preparation for the inevitable late attacks and final sprint.

With 1.5 kilometers to go the games began as Sagan weaved across the road with Trentin moving to the front. It looked like a mistake by the Italian rider, and so it proved.

Sagan was the first to launch his sprint with 250 meters to go, catching the rest of the peloton off guard and and quickly opening a significant gap.

From there, the World Champion breezed across the finish with one arm in the air to take his first victory of the season.

“I wanted to go for a normal sprint, but they started attacking after crossing the finish. After that, I was in the front in the breakaway and I was really glad the guys in the front worked very well,” Sagan said.