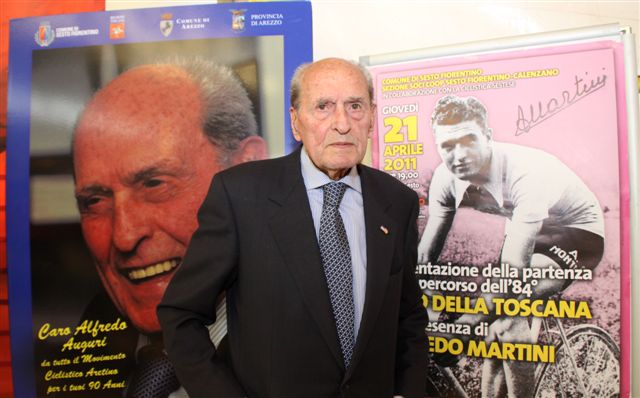 Martini won several races as a professional cyclist, however, his real contribution to the sport, was as a coach and as head Italy’s national team.

“People celebrate me as if I’ve won the races,” Martini said on his 90th birthday. “I’ve had the luck to work with great cyclists who knew how to apply themselves.”

Martini directed the Italy’s national team from 1975 to 1997, and saw his “Squadra Azzurra” win the “rainbow jersey” with the likes of such luminaries as Francesco Moser in Venezuela in 1997, Giuseppe Saronni in Great Britain in 1982, Moreno Argentin in the USA in 1986, Maurizio Fondriest in Belgium in 1988 and Gianni Bugno twice, Germany in 1991 and in Spain the following year.

“I couldn’t pick one as my favorite over the other; I’d be like trying to name your favorite child,” he said. “They all put on the blue national jersey and gave it their all. It was a pleasure to have such great champions to fight for the wins.”

Martini raced himself during the years of 1941 to 1958, wherein he won a stage in the Tour of Switzerland, the Giro dell’Appennino and Giro del Piemonte, and wore the Giro d’Italia leader’s jersey for one day – finishing third in the 1950 race behind Hugo Koblet and Gino Bartali.

“My eyes are filled with tears,” said current national team coach Davide Cassini on Twitter. “I would have given anything to see him in the Italian team car that was his for 23 years. Ciao Alfredo. I already miss you.”

“You couldn’t give worse news than this!” said Tour de France champion, Vincenzo Nibali. “Farewell Alfredo Martini, a great man. Your words will be missed!”

Martini suffered health problems over the last year, and had to skip the 2013 World Championships in Florence.

He leaves behind three grandchildren, two daughters, Silvia and Milvia, and wife Elda.