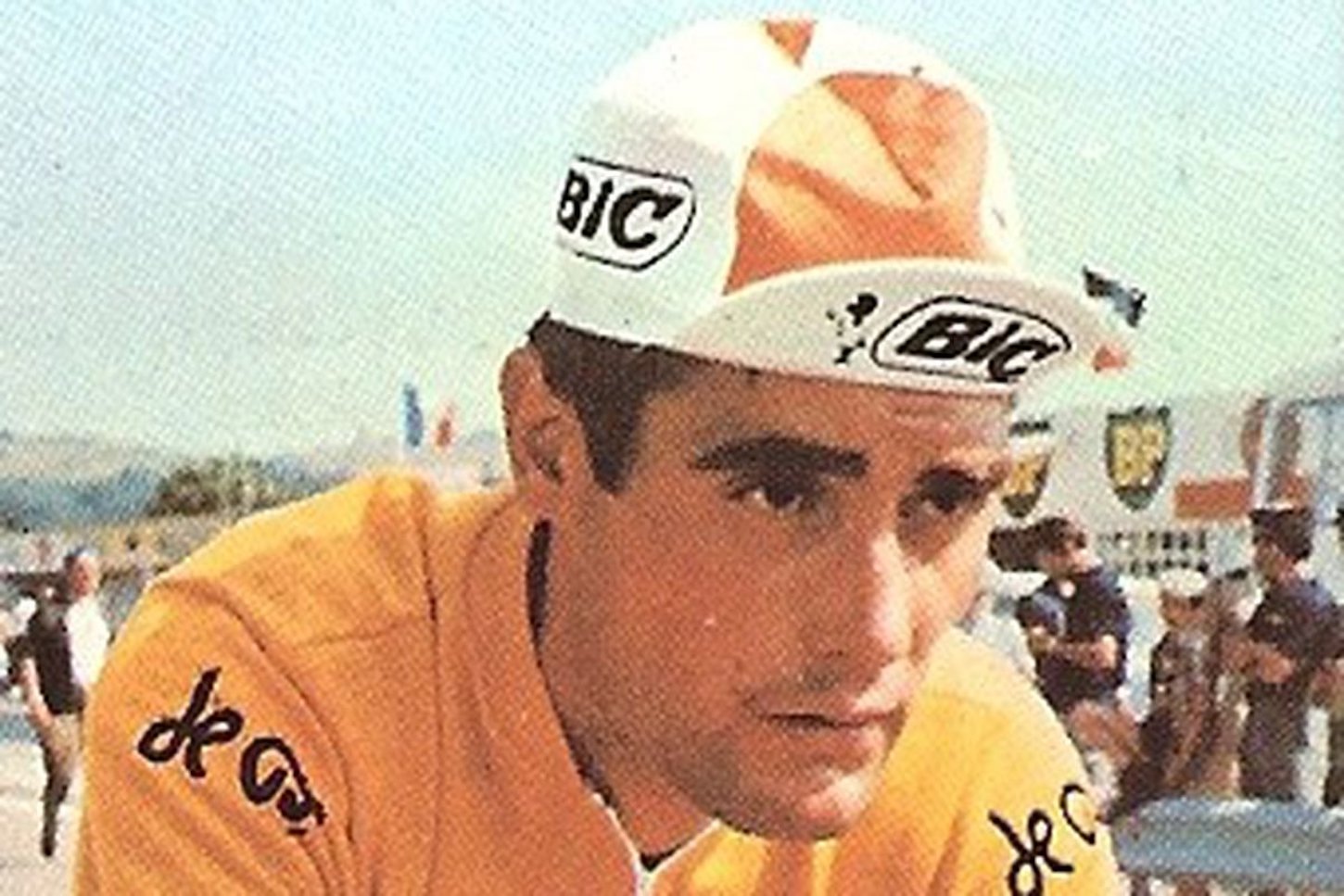 The Spanish rider is best remembered as being a supreme climber, one of the few capable of challenging cycling luminary Eddy Merckx in the mountains.

Perhaps, the only thing Ocaña had more of than great spirit was bad luck, wherein injury or illness often forced him on many occasions to abandon major races like the Tour de France.

However, Ocaña finally triumphed in the Tour de France in 1973, beating Bernard Thevenet of France and Jose Manuel Fuente of Spain.

Still, the cycling world was critical of his victory, since Merckx did not ride in that year’s French Grand Tour, instead choosing to race in the Vuelta a Espana and the Giro d’Italia, for which he won.

Prior to that, Ocaña won the 1970 Vuelta a Espana, fending-off challenges from Augustin Tamames of Spain and Herman Van Springel of Belgium.

Ocaña was born in Priego, Cuenca, Spain, but his family later moved to Mont-de-Marsan, France in 1957.

It was there that the young Ocaña took up racing with a local club, which eventually led to him turning professional in 1968 with the Spanish Fagor team and winning the Spanish National Road Championship title that same season.

The following year he finished second in the Vuelta a Espana, winning the prologue and two time trial events, as well as the mountains classification.

In 1970, Ocaña signed with the French team Bic. That season was highlighted by the epic battle between him and Tamames during the Vuelta a España, wherein he lost the leader’s jersey to his fellow countryman on the 13th stage.

Yet, a determined Ocaña succeeded in reclaiming the leader’s jersey during the time-trial event on the final day to win his first Grand Tour by almost a minute and a half over Tamames.

The Spanish newspaper Dicen, said Ocaña was “the best time-trialist that Spanish cycling has ever had”.

Next season, Ocaña finished third behind Eddy Merckx in Paris–Nice and second behind the Belgian champion in the Critérium du Dauphiné Libéré.

In the Dauphiné, Ocaña famously attacked along the summit of stage eight with four kilometers to go, subsequently riding clear of a group of favorites that included Merckx and opening up a slight 15-second advantage.

Then on stage 11 to Orcières-Merlette, Ocaña rode himself into the yellow jersey by a staggering eight minutes over Merckx.

However, chaos during the next stage would bring the curtains down on Ocaña’s chances for victory, after Merckx lost control along the descent of the Col de Menté, causing both riders to crash.

While Merckx was able remount quickly and rejoin the race, Ocaña was left struggling to release his cleats from the toe clips, only to be struck by the pursuing Joop Zoetemelk.

As a result, Ocaña was left lying on the ground screaming in pain, before being taken by helicopter to the hospital in Saint-Gaudens. He recovered, but his 1971 Tour dreams were brought to an end.

The following day a gallant Merckx refused to wear the yellow jersey out of respect for Ocaña.

The following year, Merckx initially decided not to participate in the Tour de France, instead focusing on the Vuelta a España for the first time. But, due to critics saying that he had only won the previous year’s Tour because of Ocaña’s fall, Merckx decided to ride.

Ocaña’s pre-Tour triumph in the Critérium du Dauphiné Libéré, along with winning the Spanish National Road Championship, only served to heighten what critics were calling a “rematch” between Ocaña and Merckx. But, despite repeated attacks from the Spaniard in the Pyrenees, Merckx was unfazed.

Ocaña later withdrew from the race with bronchitis.

The following year, Merckx decided to ride the Vuelta a España and Giro d’Italia, marking the first time that he contested the Spanish Grand Tour.

Ocaña battled Merckx in the race, along with Bernard Thévenet, but the Belgian emerged victorious, beating his Spanish rival by almost four minutes.

Because Ocaña had only finished one out of the four previous editions of the Tour de France, he was not considered a favorite to win the 1973 race. Merckx, who was not competing, had picked José Manuel Fuente, Joop Zoetemelk and Raymond Poulidor as likely winners.

Indeed, Zoetemelk and Poulidor finished first and second respectively after the prologue, while Ocaña crashed during the first stage after striking a dog that ran into the peloton.

On the third stage however, Ocaña and his team distanced their rivals.

The stage began in Roubaix and when the peloton traversed the cobblestones at Querenaing, Ocaña and four teammates attacked, later opening up a sizable gap of five minutes.

Despite their advantage later being halved later in the stage, Ocaña et al crossed the finish well ahead of the chase, while Fuente finished a massive seven minutes back.

While critics were predicting a battle between the duo, Ocaña delivered a crushing defeat to his rival during the third mountain stage.

Fuente had attacked early on in the stage during the climb of the Col du Télégraphe, taking Ocaña and a group of favorites along with him. But, on the following climb of the Col du Galibier Ocaña took the lead, and after the descent he and Fuente had opened up a gap of one minute over Thévenet, while the next group was five and a half minutes behind.

However, a puncture later sidelined Fuente, giving Ocaña the stage victory by almost a minute, while Thévenet lost more than seven minutes, followed by Martinez, Zoetemelk, Van Impe and Poulidor, who finished a staggering 21 minutes back.

As a result, Ocaña led the general classification by nine minutes over Fuente, ten minutes over Thevénet with Zoetemelk in fifth at more than 23 minutes behind.

Ocaña then won the stage 12 time trial, leaving the next Pyrenean climb as the deciding factor in the ever-increasing showdown between Ocaña and Fuente. But, Ocaña easily vanquished his Spanish rival in what was the longest mountain stage in the race.

Ocaña went on to win the last individual time trial, along with the mountain stage to Puy-de-Dôme, which sealed the overall victory for him, beating Bernard Thévenet by almost fifteen minutes.

After winning the 1973 Tour de France, Ocaña finished third the following year, while also winning the bronze medal in the World Championship Road Race. He also won the Vuelta Ciclista al País Vasco that year, and finished fourth in the Vuelta a España, which was won by Fuente.

Ocaña was unable to defend his Tour de France title that season due to an injury sustained during the Midi-Libre.

Ocaña’s career began to wane from there, mustering only a fourth place finish in the 1975 Vuelta a España.

Despite being back in top form the following season, Ocaña only managed a third place finish in Paris–Nice, while missing out on a victory in the Vuelta a España, after finishing a minute behind José Pesarrodona.

Ocaña retired at the end of 1976 season after finishing a disappointing 25th in the previous year’s Tour de France, finding respite at his vineyard in Nogaro, France.

Sadly, Ocaña committed suicide in 1994. It is said that he was depressed over financial matters and was also suffering from liver cirrhosis, hepatitis C and cancer.

Despite their rivalry on the road, Merckx arranged for a Belgian distributor to order sizable quantities of wine from Ocaña’s ailing vineyard over the years.