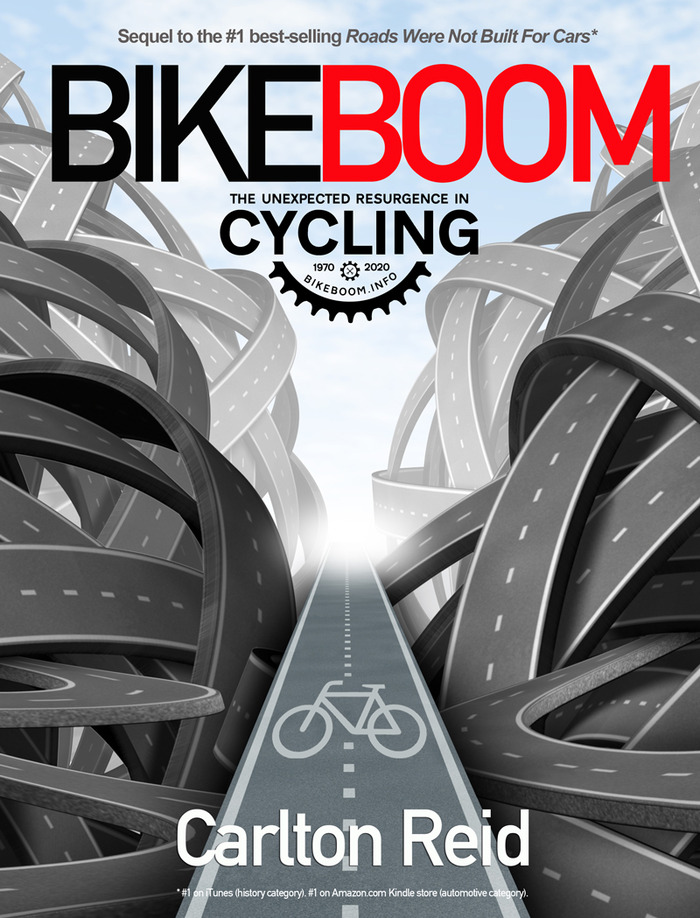 Author Carlton Reid, has turned to crowd-funding, is hopes of getting his new novel, “Bike Boom”, off the press and into the hands of readers.

Described as an “entertaining and thought-provoking book about the unexpected resurgence in cycling in the 1970s, through to today and beyond”, Reid’s currently has a campaign to raise funds inlace, on the site Kickstarter.

Please give it a look.

Use of bicycles in America and Britain fell off a cliff in the 1950s and 1960s thanks to the rapid rise in car ownership. Urban planners and politicians predicted that cycling would soon wither to nothing, and they did their level best to bring about this extinction by catering only for motorists. And then something strange happened – bicycling bounced back, first in America and then in Britain. Today’s global bicycling boom – even the one in the Netherlands – has its roots in the early 1970s.

And this is what I’d like to explore in Bike Boom, a book that will use history to shine a spotlight on the present, and demonstrate how bicycling in the future has the potential to grow even further, if the right measures are put in place by the politicians and planners of today and tomorrow.

Thanks to 216 backers – as of this second on 27th Feb – my project is £1,638 over the funding target. This means I am now locked in to researching and writing Bike Boom. However, the campaign is still live and there’s another 17 days available for people to bag rewards. With more funds I can add more stuff,

£9,000 – All backers of the posted rewards will get a Bike Boom bookmark.

£12,500 – All backers of the posted rewards will get a Bike Boom poster. This will feature a huge number of people on bicycles with a headline calling for more cycling facilities to be provided in order to cater for the growing demand. Backers can stick this up at home, or they could sneak in to a planner’s office and stick it somewhere prominent …

£15,000 – I’m only printing enough copies of the first edition to fulfil Kickstarter rewards. However, if I reach £15,000 in pledges I’ll print an extra 20 copies and send them, gift-wrapped, to individual planners, politicians or other powers-that-be. The recipient list will be up to you – I’ll send out a poll to see who should get mailed with books. How about the US Secretary of Transportation or the UK’s Transport Secretary? (Actually, prior to a press launch for something unrelated I was given official permission to hand a copy of my previous book, Roads Were Not Built For Cars, to the UK’s Minister for Roads.)

I’m Carlton Reid and I’ve been writing about bicycles for 30 years, starting with articles about bicycle travels in the Middle East in the 1980s. I’m the executive editor of trade magazine BikeBiz.com and am the author of nine books, two of which weren’t about cycling (but both were written from the saddle of a mountain bike – the Berlitz Discover Guide to Israel, 1993, and Lebanon: A Travel Guide, 1995).

Between 1998 and 1999 I published the general interest On Your Bike magazine which catered to family cyclists and those thinking of starting or returning to cycling. This was for normal people in ordinary clothes, and I even had a Dutch journalist as an employee, who wrote features on Groningen.

While I have a strong interest in cycling for transport (my everyday bike is an Xtracycle cargo bike, not the touring bike seen in the video above) the boom in cycling is much wider than this. Bike Boom will explore all aspects of the growth in cycling – from Hackney hipsters, to tall-bike jousting in Portland, Oregon, as well as the growth of track-cycling in the UK (count the velodromes we have today which we didn’t have 20 years ago).

Bike Boom is a follow-up to Roads Were Not Built For Cars, which was successfully funded on Kickstarter in 2013, and sent out to backers last year.

Bike Boom will be available in a Kickstarter-only limited print-run first edition and will also be available as an ePub file and for Kindle devices and apps, and there will be a multi-media iPad version, too.

The first print edition of Roads Were Not Built For Cars was sold out within days and such has been the demand for this quickly out-of-print book I’ve heard Twitter tales of offline meet-ups between strangers for the book to be borrowed. The iPad edition went to number one in the history category on iTunes. The Kindle edition made it to number one on Amazon.com, in the automotive category.