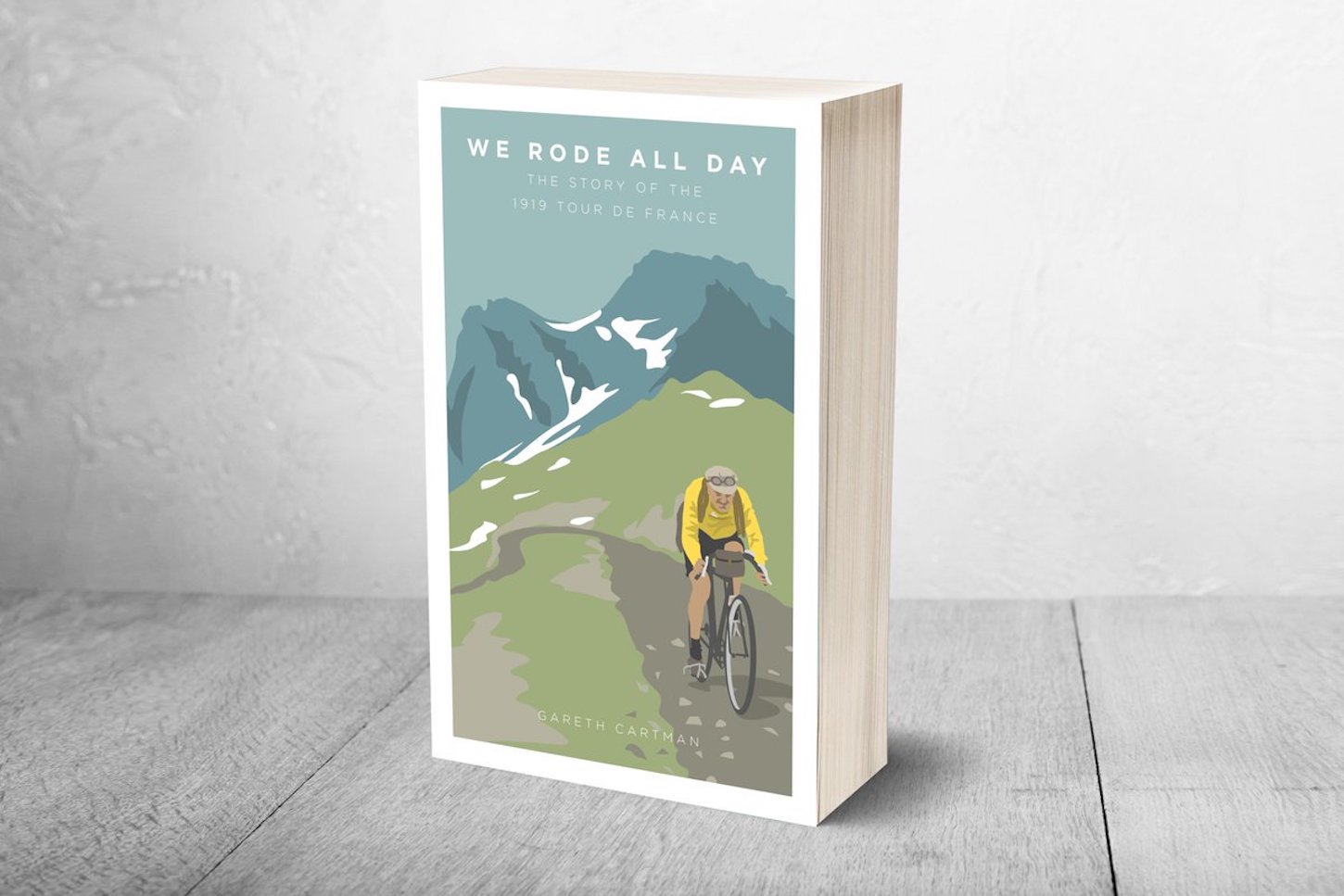 01 May 2019
By Gianni Pericolo - In FEATURED ARTICLES, LATEST ARTICLES, VELOPATHIC

We Rode All Day is the story of that fateful 1919 Tour de France; the Tour that very nearly never was. In the voices of the riders and race organisers, We Rode All Day throws you into the action – the dirt, the pain, the drugs, the cobbles, the mountains, the sheer madness of riding your bike for 5,500km around France. And two men who knew this could be their last Tour.

“Don’t look up Firmin, just ride. Fight the pain, but don’t look up.”

Under grey skies and through the ruins of war, two veterans battled for the Tour’s first yellow jersey. Firmin Lambot and Eugene Christophe had raced each other into the ground; the race had come down to what some riders were calling the hunger stage – 420km from Metz to Dunkirk.

We Rode All Day reveals the stories that made the 1919 Tour special. The slaying of Henri Pelissier, scourge of the peloton; the emergence of Honore Barthelemy, the climbing revelation, and the efforts of Henri Desgrange, organiser of the Tour since its inception in 1903. The book is finally an opportunity to hear the voices of the riders and organisers, bringing to life an era of cycling – and with it, a generation of cyclists – that had long been forgotten.

When I started writing this book, the last thing I wanted to write was a dry, blow-by-blow history. I wanted to bring the 1919 Tour de France to life – to put you (dear reader) on a bike and let you experience the race for yourself.

So I wrote it as a multiple first-person story, told by the riders themselves. Now, piecing together the action was the easy bit – the French National Library has digitised all of the old copies of L’Auto (the organising newspaper), which meant that the chronology was easily available. The riders’ voices, however, are the result of reading interviews and biographies – and I hope that I have stayed true to them.

I have tried to stay as historically accurate as possible, too. As much as historical fiction allows… So while it’s true that the peloton attacked Henri Pelissier on stage 4, it may or may not be true that he took drugs (probably amphetamines) in order to get back in the race. If I were him, back then, I probably would have done, and he did admit in 1923 to being a ‘pharmacy on wheels’.

But mostly, I wanted We Rode All Day to be the opportunity for these riders to finally gain the recognition they deserve. We revere the exploits of Coppi, Bartali, Merckx, Pantani and the like. But the likes of Alavoine, Christophe, Lambot, Scieur and Barthelemy barely get a look in. And I think they should.

excerpt from the book…

The mood in here stinks. It stinks worse than Noré Barthélémy’s feet. There’s fleas in the bedsheets, the rain is seeping in through the roof. And while we’re in the barracks out in the arse-end of Brest, the Pélissier brothers are – I don’t know, I’m guessing – sleeping under Egyptian cotton bedsheets in the most expensive hotel in town, fumbling with their tiny willies as they dream of themselves.

Eugène hasn’t slept. He was there when Pélissier told that hack from l’Auto that the other riders are all workhorses. I swear he would have swung for Henri if the gobshite hadn’t ducked out of there the minute he’d said it. Dropped a bomb.

Even the Belgians are in a huff.

“Workhorses,” mumbles Eugène, in between rustlings of the morning papers.

Someone grunts back; saves me doing the job.

Ugh. I lift myself up off the bed, and the sheets come with me. Jesus, these sheets, we had better in the war.

“Workhorses, eh?” I fumble for my cigarettes.

A Eugène mood hangs over the room like a shit cloud. I strike a match and the first drag is always the best. Even a workhorse can appreciate the first hit of a cigarette, and this is a workhorse who can beat Henri Pélissier in a sprint. If I ever get the chance.

“Well I’m a show pony, Eugène. That would make you a stallion, and Nempon out there would be a donkey.”

I always find flippancy to be the first resort. Eugène’s not so convinced.

“Called him and his brother a thoroughbred. You want to let him get away with this? You think it’s funny, Jean-lad?”

“Well, he is good, Eugène. He’s wiping the floor with us at the moment. Him and his brother. He’s been riding for the last three years, he’s got the legs, he’ll probably win this Tour by a full day if he carries on like this.”

Eugène’s fuming. “And where is the fucker anyway? Hm? I bet he didn’t stay here last night.

Ah. Yes. We didn’t mention that. We forgot to mention that they’re staying in a nice hotel with Egyptian cotton bedsheets, and they probably got a bedtime story from Henri Desgrange, probably about ponies who travelled 300km a day and were grateful for the opportunity.

Sure, the Pélissiers are arrogant, but they’re good. The public love them, they put on a show, and they’re wily little sods, too. Look at Henri P – who else could get away from the front line because he was diagnosed as having a “weak disposition”, and then win Paris-Roubaix AND Bordeaux-Paris? How can a man of weak disposition do night after night at the Velodrome while the rest of us are fighting the Germans?

Some men just live a charmed life. Henri Pélissier, thoroughbred indeed. He probably shits chocolate in the morning and farts perfume at night underneath a velvet duvet.

“Let’s attack him,” I offer. Mainly to defuse the moment, because if Eugène punches the wall of these barracks, he’ll cause a draught.

“We’d have to relay for hours,” mopes Christophe, the walking rulebook. Oh come on, Cri-Cri, bend the rules. Desgrange would love a proper stage to write about. Let’s have some fun.

“There’s a difference between a super-fast peloton and two guys relaying, Eugène. Dejo’s up for it, aren’t you?”

I turn to Lambot, who is seemingly lost in his thoughts.

Good man. Bring up your dead, Lambot’s in town. He’ll do anything to knock another rider out of the race. Any rider. Best to keep him on your team.

Eugène’s turned to the race profile, thumbing his way along the route.

“Quimperle,” he mutters. “That’s the time and the place to do it. Just wait for a chance there. You’ve got 100k of flat, nothing too spiky, no big turns, and we’ll have daylight. No checkpoints for 50k, so we’ll have the time to put some miles on him.”

The old boy’s up for a bit of fun. What’s more, everyone else is up for it, too.

That stringbean piece of shit won’t know what’s hit him.

Mischief is a marvellous incentive. You could be awake all night. You could ride with a broken leg, but if you’ve got mischief on your mind, if you’re doing it for fun, then you can ride for days without stopping even for a drink. It’s not revenge – revenge is too dark a word, too shady a concept – it’s about teaching someone a lesson. Taking someone down a peg. And why not actually try to enjoy a stage of this race for once?