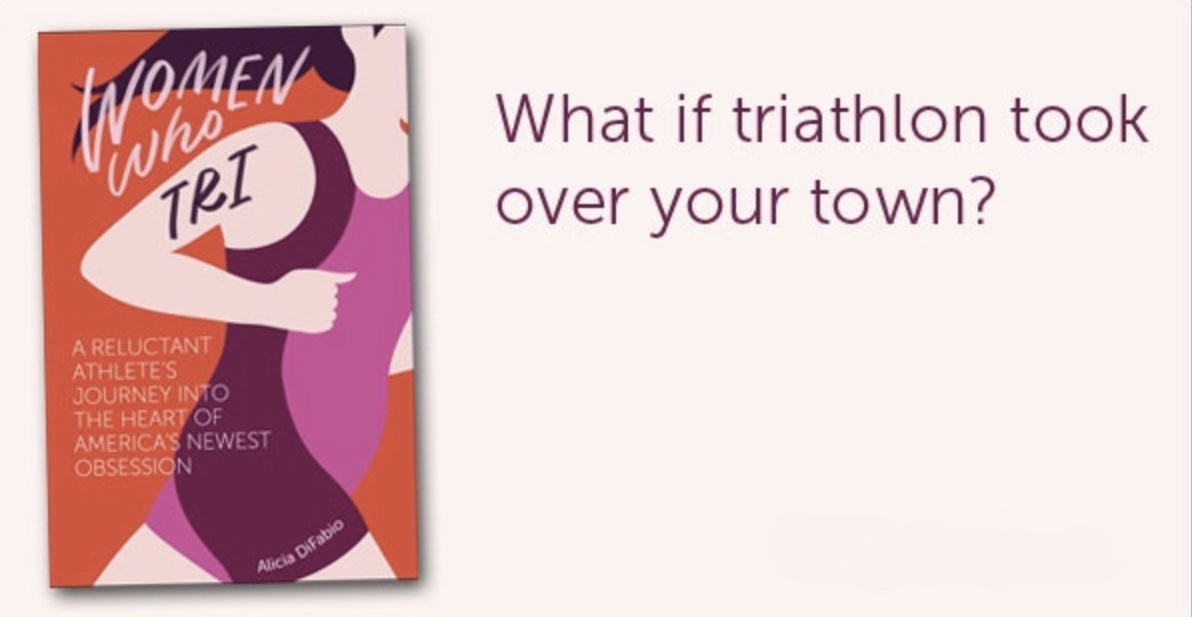 Women are becoming endurance athletes in record numbers. From running to triathlon, women are the reason endurance sports are booming. Alicia DiFabio explores the surge of women in sports in her own personal story, Women Who Tri: A Reluctant Athlete’s Journey Into the Heart of America’s Newest Obsession. DiFabio’s journalistic memoir is an inspiring and informative look at the history, psychology, subculture, and transformative power of triathlons among “ordinary” women.

What would you do if nearly all the women in your town took up triathlon? If you’re like DiFabio—an out-of-shape, harried mother of four small children whose daily look featured stained yoga pants, a messy ponytail, and under-eye circles bigger than her diaper bag—you would shrug your shoulders and try to hold on for that after-bedtime glass of wine. So it was to her utter surprise when she found herself on the starting line of a triathlon.

In Women Who Tri, DiFabio explores the triathlon phenomenon that gripped her town and swept the nation. This personal story compares DiFabio’s own experience in the small, New Jersey town of Mullica Hill alongside the national surge of women’s participation in endurance sports since Title IX. Women Who Tri weaves together the insights of a psychologist, the research of a journalist, and the deep insecurities of a daunted newbie. DiFabio shares her journey from nervous newcomer to triathlon finisher as she investigates one of the world’s most challenging, inspiring, and fastest-growing sports. Women Who Tri will entertain, enlighten, and inspire any triathlon enthusiast, from tri-addicts to the tri-curious.

excerpt from Women Who Tri…

I stand on the bank of a lake in the calm of morning, bare toes tickled by the sparse grass. The 7:00 a.m. sun has not yet warmed the fresh sum­mer air, but it makes the lake’s surface shimmer like a diamond. To my left, a growing group of spectators aligns the overpass bridge. To my right is the finish line I hope to cross in less than two hours. Directly ahead is my biggest fear and greatest weakness—the quarter-mile open-water swim. The first of three events comprising the Queen of the Hill Sprint Triath­lon. Surrounding me, over 300 women of all shapes and sizes, ranging in age from 14 to 75. Despite the diversity of the group, little distinguishes us from one another, clad as we are in matching black-and-pink tri suits, hair tucked beneath swim caps, faces free of makeup. In our caps, color-coded by age groups, we look like a moving rainbow. Some women in the crowd are confident and focused; others are tearful and nervous. The quiet buzz among us contains everything from excited, giggly chatter to softly whis­pered prayers.

Today is race day. For some, this is just one of many races on their sched­ule this season. For others, like me, today is our very first triathlon. Today is bucket list day. It’s the day when our dreams will prove to be just a little bit greater than the sum of our fears.

Cheers erupt as the first age group wave is called to the water’s edge. Instead of the chaos of a “mass start” typical of most triathlons, the Queen of the Hill Sprint Triathlon avoids the fury of splashing arms and legs by bringing each of the nine waves of competitors out to the water and letting them jump into the lake one at a time. Timing chips strapped around our ankles will take care of the rest. It’s all quite civilized, and newbies like me appreciate anything to keep the anxiety level down.

First to go are the orange caps. As I watch them parade down to the water, I feel my stomach churning. I hug my arms across my chest to stop from shaking. My eyes wander out across the lake. Glassy and expansive, Lake Gilman is beautiful and placid, yet somehow today it seems more for­midable than serene. I note the final buoy marking the turnaround for the quarter-mile swim. It seems so far. Too far. Did it look that far in my prac­tice swim weeks ago? I know the water will be cold and dark and deep, and I’m a novice swimmer. I know this first leg of the race will be my greatest challenge, not so much physically as mentally. I remind myself that if I just keep my head together, I can do this.

I scan the crowd of onlookers, hoping to catch a glimpse of my family. I can’t find them, so instead I picture their faces—four sweet little girls and my husband, who I know is already proud of me before I’ve even started the race. Who believed I could do this long before I believed it. Even as I try to draw strength from all the people who have supported me on this triathlon journey, I have reached that point where no one else can do this for me. Right now, there is only one person I can count on. It’s up to me, and me alone.

There are only white-capped women left on the shore. I stand anx­iously among them. We are the final wave of the nine age groups—the 45- to 49-year-olds. Though we are not the oldest age group competing, the race directors have put us last in the lineup. The lake is now alive with the splashing arms and bobbing heads of 300 women who have already started their journey. Some of them are already exiting the water and running up the hill to jump on their bikes. Meanwhile, the white caps are only now fil­ing down the slope of the bank. It’s showtime.

As the women in front of me begin systematically disappearing from the tiny dock, my position advances. I’m alive with adrenaline, my head spin­ning with every fear and doubt I’ve until now held at bay. I steel myself, fill­ing my head with positive mantras, reminding myself of my sole goal—to finish. Just swim. Then bike. Then run. One thing at a time. One stroke, one step, one mile at a time. I got this.

“Call out your number before crossing the timing mat, then jump in,” a race official instructs. I glance at my arm where a volunteer body-marked me with thick black marker earlier this morning. “One-O-six!” I call in a thready voice as I step across the blue-and-orange timing mat. With that one step, my race officially starts.

The worn planks of wood have all but disappeared under my bare feet. I’m at the edge, the splash of the woman in front of me rippling the water. The heat of the woman directly behind me urges me forward. There is no time to hesitate, to panic, to waver, to choose. There is only this heartbeat of a moment.

The words of Eleanor Roosevelt nudge me with a gentle whisper. You must do the things you cannot. So I jump.

In an instant, I am swallowed whole and the world goes cold, dark, and quiet. The voices in my head clamor, then hush.

I rise. I breathe. Then, I do the only thing left for me to do.