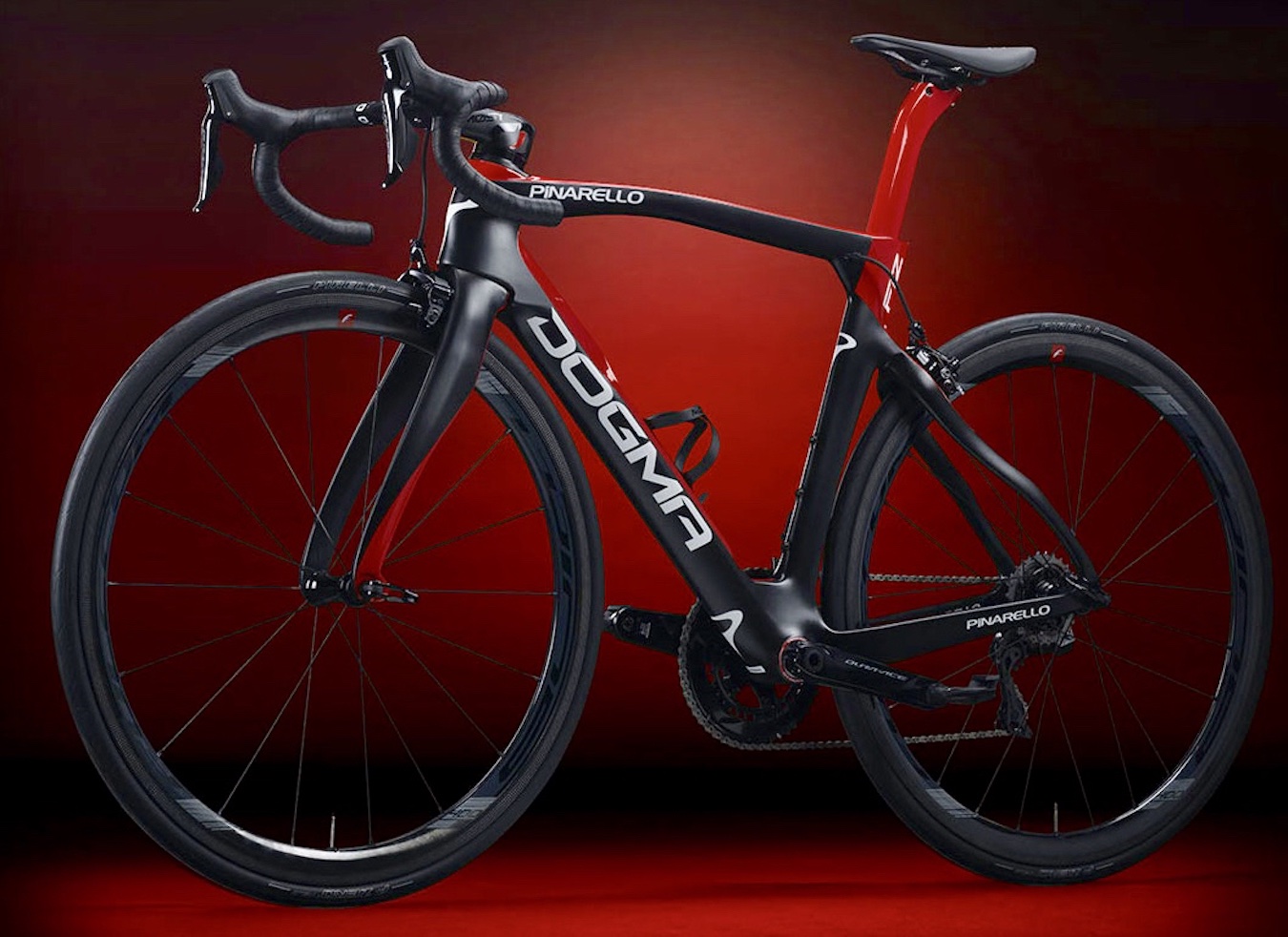 01 May 2019
By Gianni Pericolo - In FEATURED ARTICLES, LATEST ARTICLES, THE DOUBLE DIAMOND

Fast on the heels of its new full-suspension Dogma FS, Pinarello has unveiled its latest flagship road bike called the Dogma F12 and F12 Disk.

While Pinarello has always offered disc brake equipped Dogmas in the past, the Italian brand says the new Dogma F12 was developed from the ground up with a disc brake variant in mind, sharing the same technology between both versions.

According to Pinarello, improved aerodynamics were an important aspect when designing the new Dogma F12, which features revised tube shapes and profiles such as a pinched toptube found on their new Grevil gravel bike.

“Developing the Dogma F12 frame we started from a design concept that could pursue the Pinarello’s tradition as style icon but then every aesthetic element was analyzed and modified until it guaranteed a significant aerodynamic or structural improvement,” says Pinarello.

“The result is a frame that from the aesthetic point of view shows a remarkable leap forward from previous generations but at the same time, it achieves the best aerodynamic efficiency values of any Dogma model to date. “

Another feature that punctuates the new Dogma F12 is a revamped version of the Flat Back downtube from the previous Dogma F10, which is now slightly narrower, along with a larger 1 1/2in upper bearing for the headtube in order to provide extra clearance for the internal cable routing.

Additionally, Pinarello has also reshaped the bottom bracket area of the new Dogma F12 in order to allow the bottle cage to be mounted 5mm lower for improve airflow, while the fork has been slightly tweaked with a larger profile at the top of the fork legs to further cheat the wind.

Above and beyond the frame’s more slippery profile, Pinarello says it was able to further enhance the Dogma F12’s aerodynamic signature by integrating as much cable routing as possible, along with a newly revised Talon Ultra integrated handlebar and headset design, which they claim resulted in a staggering 85% less drag than the previous set-up.

As a result, Pinarello says the new Dogma F12 saves the rider a claimed 8 watts at 25mph (40kph).

The Talon Ultra was first introduced in 2015, but the latest version now channels cables through an enlarged rear section of the stem, which in turn directly routes cabling into the frame.

The Dogma F12’s headset spacer system remains the same, allowing up to 40mm of adjustment, while a regular handlebar and stem can still be used.

Further stiffness for the new Dogma F12 was achieved by way of a redesigned bottom bracket and more robust chainstays, resulting in a 10% increase in rigidity over the Dogma F10, while the new fork on the disc brake model reduces torsional flex by a claimed 40%. Furthermore, the updated Talon Ultra handlebar is said to be 8.6% stiffer and 10.3% lighter than the previous version.

Last, but not surpassingly least, more tire clearance has been added to the Dogma F12 as well, allowing for tires up to 28mm, while the rim brake version finally gets direct mount brakes.

All in, Pinarello says the new Dogma F12 tips the scales at a feathery 820g for a raw, unpainted frame, while the Dogma F12 Disk weighs in at just 20g more.

Look to see the new Dogma F12 make its debut during this week’s Tour de Yorkshire under auspices of Team INEOS.