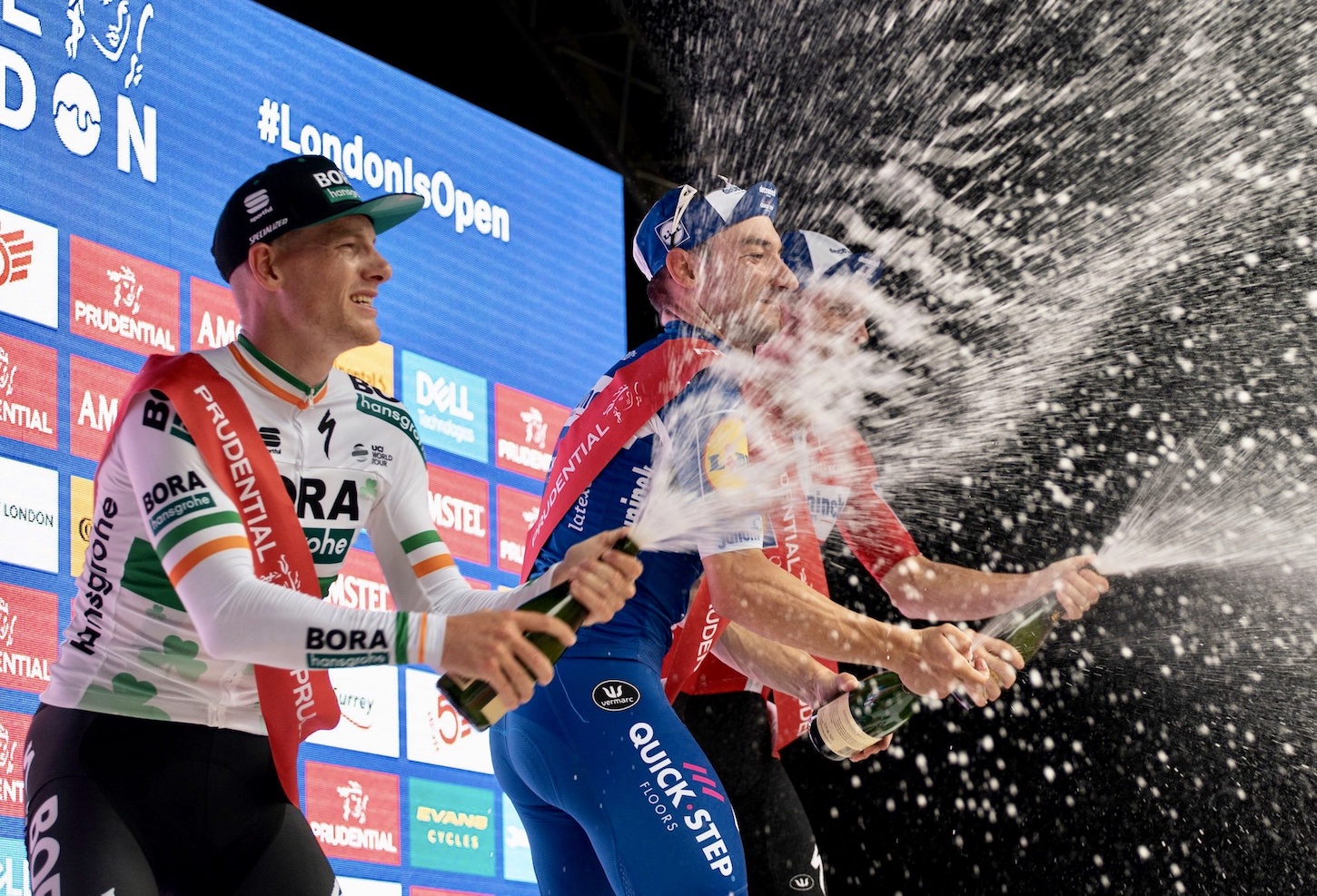 Elia Viviani sprinted  to glory on The Mall, edging out a host of the world’s fastest cyclists in a thrilling climax to claim this year’s Prudential RideLondon-Surrey Classic road race on Sunday.

A year after he finished runner-up in one of the one-day races that he wanted most to win in his garlanded career, the 30-year-old Olympic track champion, fresh from a successful Tour de France, was determined to hit the top of the podium this year and did just that with the most typically beautifully timed burst to the line on The Mall, aided by some superb teamwork from his Deceuninck-Quick-Step colleagues.

Yet just as in the women’s Classique the day before, the exciting seventh edition of the 169km race witnessed a high-speed crash in the denouement. In the Classique, the pile-up happened in The Mall itself but in the Classic, the big crash unfolded two kilometres from the finish, taking out nearly a dozen racers who were at that point jostling frantically for position outside the Houses of Parliament.

When the dust cleared, Viviani, who had avoided the mayhem, always looked the main man, and decisively struck for the line on the inside, with Irish champion, Bora-Hansgrohe’s Sam Bennett, pursuing him as runner-up and Viviani’s teammate, Denmark’s national champion Michael Morkov, finishing third.

“It was great teamwork because Michael ended up finishing third,” said Viviani, whose lead-out train headed by Czech Zdenek Stybar did the perfect job of putting him in the ideal position with 100 metres to go.

“Earlier I saw some guys go down in the crash but luckily we were on the right side and we missed it,” said a relieved Viviani.

“The team put me in a great position as we came past Buckingham Palace [just before The Mall]. I was with Iljo Keisse and Michael Morkov and we were in the middle of the group so we just missed the crash and, with the wind in my pocket, I liked the new finish.”

In 2018, the riders had hit the line from the opposite direction and Viviani ended up being pipped for victory by Germany’s Pascal Ackermann.

“This was one of the five ‘Classics’ I have in my head that I want to win in my career, so it’s good to have done it,” beamed Viviani.

“I’ve loved racing in London ever since I was here at the Olympics in 2012. I was quite young then and it was a really special course so I kept in mind this race for the future, and when it became a WorldTour one-day classic, I added it to the list of races I wanted to win.

“I really committed with the team to come here, so now I’ve won and I’m really happy. I’ve rested a bit since the end of the Tour [where he won his first stage]. It was a really tough Tour for us so I’m happy with today’s result and I will be back here to defend my title next year, 100 per cent!”

Bennett, though, was left frustrated with his second prize, revealing afterwards that he suffered a mechanical problem and had to remove a spoke from his front wheel because it had been rubbing.

“I think it [today’s race] was the only opportunity to get a one-day WorldTour win this year, so I’m disappointed not to get it,” he shrugged. “If the wheel wasn’t broken I think I could have got past him.”

Britain’s experienced 30-year-old Alex Dowsett won the Continental Tyres King of the Mountains Competition for gathering the most points in the day’s six designated climbs, including five up Box Hill, while Belgium’s Stan Dewulf took the ZIPP Combativity Award for his exhausting breakaway effort.

After the 143-strong field headed out of a new start at Bushy Park in Teddington, the first move in the opening 10km came from Lotto-Soudal’s talented young 21-year-old Dewulf, who was soon joined in his push in Weybridge by the British time trial champion Dowsett and 22-year-old Dutchman Pascal Eenkhoorn.

Having reached Box Hill in Surrey, which they were to climb over five sapping circuits, the breakaway trio managed to stretch their lead to more than three-and-a-half minutes but once the peloton started to get busy, as they scented the weakness of race favourite Caleb Ewan, their advantage was quickly cut on the third of the five ascents of Box Hill.

A week after he sprinted triumphantly down the Champs-Elysees to win the coveted final stage of the Tour de France, the Australian flyer Ewan had leaden legs and was completely dropped on the hills.

After Dowsett had won the King of the Mountains prize, his work was done and he let the other two go but their slender advantage soon evaporated as the powerful teams with the main sprinters allowed the duo to dangle at the front on the road back towards central London.

“The plan today was to go for the early break,” said Dowsett. “We discussed what to do among ourselves and decided to share the points. I think I was possibly the older and wiser one, so I made sure I was second up each climb and did everything to secure the overall by winning the last set of points.

“The lights went out on the final climb of Box Hill but for me to get a King of the Mountains is fairly unheard of so I’ll savor this and bask in my own glory for years to come,” smiled the renowned time trialler.

Dewulf, the original instigator of the attack, fittingly found himself the last to be swallowed up by the peloton with 14km left and deservedly won the ZIPP Combativity Award, having been at the head of affairs for more than 140km.

“I felt strong and I had a chance to go in the breakaway and I took my chance and I felt quite good but with three guys it was quite tough,” said the Belgian.

“There were a lot of people out here and at the start, and on the circuits of Box Hill. It was really nice, I enjoyed it and I hope to be back next year.”