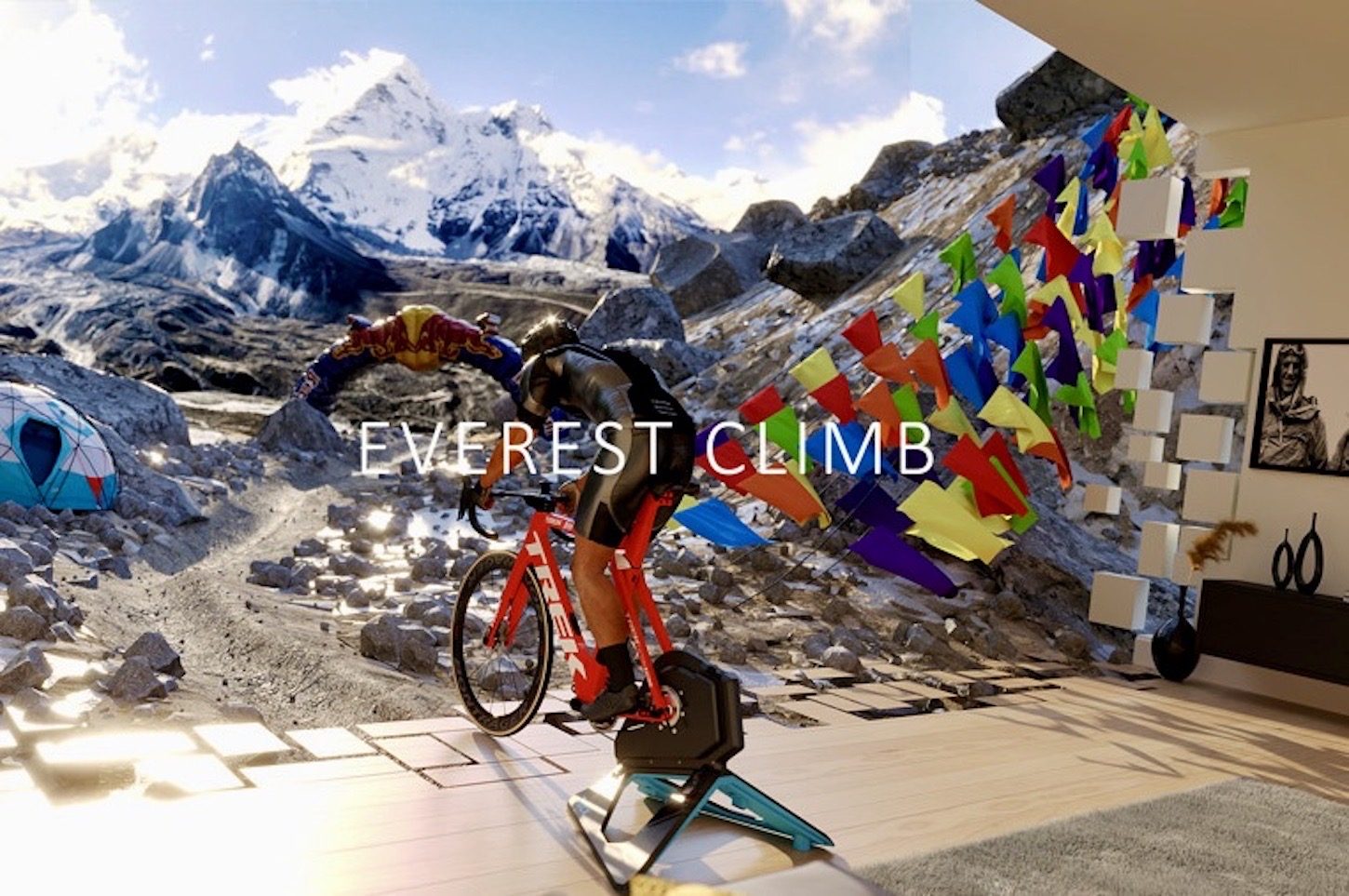 Race Republic has officially launched its indoor training and event platform, taking participants on a photo-realistic journey up Mt. Everest. “Everesting” has become a pandemic pastime for many cyclists, a way to challenge themselves and push the limits close to home. Race Republic aims to shake things up with their virtual Everest Challenge – pushing riders to attempt something no one has done, summit Everest by bicycle in a single shot, straight uphill!

At 29,032 feet of vertical gain over 100 miles at an average grade of 6%, it’s a cycling workout like no other. The course is an accurate virtual route up Mount Everest, with stunning graphics. You’ll climb to base camp, traverse the Khumbu Icefall and make your way to the summit. The ability to toggle gradient allows each rider to fine-tune the event to their energy level and fitness

Participants will be joined by Tour de France stage winner Dave Zabriskie and 2006 Tour de France champion Floyd Landis. “I am really excited about Race Republic, and the Everest challenge. It feels great to be competitive again, lining up at gravel races and finally feeling fit and passionate enough to participate in cycling again”, says Landis. “For the record, I am 46 years old. Dave Z and I plan on giving it our all, but the odds are against us”.

Everesting was formerly a niche in cycling, but socially-distanced rides early in the pandemic became a perfect venue for the challenge. “Non-Virtual Everesting” takes place on a suitable road which is climbed then descended enough times to reach the necessary vertical ascent. A first of its kind, with the Everest Challenge – you’ll be climbing the whole time with zero downhill.

Race Republic organizer Mark Jensen expects the Everest record (6:40:54) to be broken during the first 32 days, hopefully by Landis, “He is incredibly humble and kind, but he’s also one of the fastest guys I have ever seen.  He’ll jokingly remind you that he’s 46 years old and then leave you in the dust.  If Floyd decides to break the Everesting world record, he will.”

Participants can register for the Everest Challenge Here.

As title sponsor for the event, Floyd’s Of Leadville is throwing a One Hour Everest Challenge. Race alongside Pro Tour champions Floyd Landis and Dave Zabriskie and see who can climb the most feet on Everest in one hour – for free. Floyd’s will award the rider who has the most vertical gain in 60 minutes with a $150 online gift certificate for Floyd’s of Leadville. Floyd’s Everest Climb Contest can take place anytime from December 31st through January 31st and is the perfect way to kick off your New Year’s fitness goals.

To register for Floyd’s One-Hour Everest Climb Contest, use this link and enter code “Everest”

Race Republic will be offering an equal purse $5,000 cash prize for the first man and woman who break the existing record. If multiple men and women break the record before December 31, then the fastest time by January 31, 2022, will be the winner. The current women’s world record is 8:33:47, men’s record is 6:40:54. Official guidelines are available at the Race Republic website.