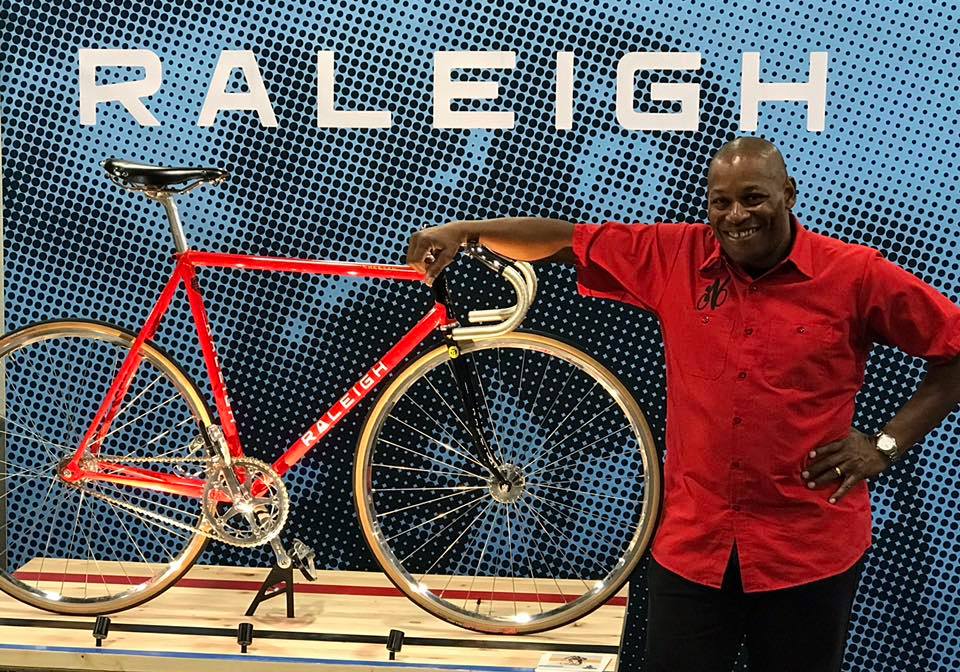 Vails (whose nickname was “The Cheetah”) was the first African-American to win an Olympic medal in cycling, after winning a silver medal at the 1984 games in the individual track sprint.

According to Raleigh, two versions of the bike will be available, a retro replica of Vails’ race bike as well as a modern aero version.

“The Raleigh brand has a rich and deep heritage that spans over 130 years,” said Steve Westover, Raleigh’s director of marketing. “We felt it was time to celebrate our heritage with a series of projects. Our collaboration with Nelson Vails and Don Walker epitomizes that.”

The retro remake of the Cheetah is built using largely made-in-the-USA parts from Walker’s shop in Kentucky, which will feature tubing from the Cincinnati-based Vari-Wall, along with lugs from Portland-based bike builder Henry James and a mix of components from Phil Wood, Cane Creek and Velocity Rims.

“This is one of the most exciting projects I’ve been a part of in my career as a frame builder,” said Walker. “Not only do I get to build bikes for a legend like Nelson, but I get the added bonus of them being for my friend.”

In addition to the replica frame, Raleigh will also be offering a modern Cheetah Fast model.

This frame will also be built in Walker’s shop, but will feature TIG-welded Columbus tubing, along with a carbon fork and components from Vision and FSA.

Both bikes will be produced in limited quantities, and available in four sizes with a cost of $6,500.

During the 1984 Olympics in Los Angeles, Vails earned a silver medal in the individual track sprint. Two versions of this bike are now available: the Cheetah, a modernized version of Vails’ 1984 race bike, and the Cheetah Race, a lighter, more aggressive and aerodynamic version.

Both of these steel Raleigh bikes are made largely from made-in-the-USA parts at Walker’s one-man shop in Kentucky. The tubing for the Cheetah is Vari-Wall (Cincinnati), castings are made by Henry James (Portland, Ore.), and additional components are from Phil Wood (San Jose, Calif.), Velocity Rims (Michigan), and Cane Creek (Fletcher, N.C.). Raleigh Bicycles chose to work with Walker on this project in part because of Walker’s lasting friendship with Vails. The two met at the 1983 Track Nationals on the warm-up track before Walker’s event.

For Vails, who was inducted into the U.S. Bicycling Hall of Fame in 2009, the project is equally exciting. Although Vails doesn’t race anymore, he has had a lifelong relationship with Raleigh Bicycles (he raced for the Levi’s/Raleigh Pro Team) and still loves to ride.

“What I’ve always liked about cycling, then and now, is the freedom. Getting in some fitness and being outside,” said Vails. “When I think back on my lifelong relationship with Raleigh, and my racing days with the team, I remember there were many moving parts between working directly with engineers at Raleigh to create the bike and how it all came together. I remember thinking ‘This bike really works.’ Raleigh took the time to sponsor me and develop a bike that would one day become a part of world cycling history.”